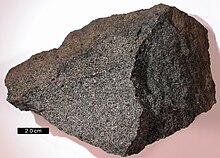 Handpiece of a Mesozoic gabbro from the Sierra Nevada, California

Gabbro is a compact, coarse-grained igneous rock of Plutonic origin. It is the plutonite equivalent of basalt , i.e. That is, it crystallized deep in the earth's crust from a magma that would have solidified to basalt on the earth's surface after it emerged from a volcano .

Natural stone pattern (25 × 15 cm) under the name of a Star Galaxy sold Proterozoic gabbro from the Eastern Ghats -Faltengürtel, India .

Gabbro has a gray-black, occasionally blue-green color, which comes from the high proportion of dark-colored minerals such as pyroxene and olivine , of which it is mainly composed. The light part consists mainly of plagioclase feldspars . Quartz or a mineral from the group of feldspar representatives can be subordinate. In addition, the minerals hornblende , biotite , magnetite and ilmenite and accessories such as pyrite , magnetite, apatite and others occur. If more than 5 percent orthopyroxene is present, this rock is classified as norite . In addition to the norites, anorthosite and hyperite belong to the gabbros group. They differ in the proportion of mafic minerals.
As the proportion of plagioclase decreases, gabbro gradually changes into peridotite , the main component of the upper earth's mantle .

Gabbro is found mainly in the oceanic crust , less often in the continental . It is formed by the slow cooling of basaltic magma , usually more than five kilometers deep, with plutons (extensive masses of deep rock) often forming . Recently, it is mainly created on mid-ocean ridges through the slow crystallization of the rising mantle material. A gravity-related separation of the crystallizing minerals can occasionally lead to stratified gabbro rocks . Some of these gabbro occurrences within the continental crust may be due to the differentiation of acidic magmas (resin). Within a larger quartz-rich magma chamber, even basic, low-quartz or -free rocks form relatively small-scale, others may be remnants of continent-continent collisions (including accretion wedges).

Classification of gabbro in the QAPF diagram

Due to the stock of felsic minerals, gabbro is in the QAPF classification diagram on the side of maximum plagioclase management. Gabbro s. st. (0–5% quartz) changes into quartz gabbro with increasing quartz content . If the rock contains feldspar representatives instead, one speaks of foid-bearing gabbro . Nepheline gabbro is called Theralith , Analcimgabbro Teschenit . Further types can be distinguished based on the ratio of mafic minerals (see fig.). For example, increasing oliving content leads to oliving abbro and troctolite .

As Mikrogabbro be very fine-grained, usually gang shaped referred occurring gabbros. This term is more or less synonymous with the term dolerite in German .

Outcrops of unmetamorphosed Gabbrovorkommen can be found anywhere in the world, but are much less common and geringumfänglicher as such by granitoid plutonic rocks. Gabbro occurs in Germany in the Harz near Bad Harzburg , in the Odenwald ( Frankensteiner Pluton ) and with a very small occurrence in the Black Forest near Ehrsberg . Enclosed in a suite of amphibolites and metagabbros, gabbros can also be found in the north of the Bavarian Forest near Furth im Wald (southwestern edge of the Bohemian Massif ). Also in the Bohemian Massif, but on its northeastern edge not far from the Czech - Polish border, the "gabbrodiorite" of the Deschneyer Spitzberg bites out.

Well-known and large deposits are found in South Africa around Rustenburg , in India in the state of Andhra Pradesh and in Greenland in the Skaergaard complex.

Gabbro is used as a building material in the exterior (facades, stair and floor covering) and interior (stair and floor covering, window sills) as well as for tombs . All types of processing of these natural stones are possible from grinding , polishing to flaming . Gabbro are also used for gravel and as road construction material.

Gabbro was first named by the German geologist Christian Leopold von Buch after a town near Rosignano Marittimo in the Italian region of Tuscany . Since gabbros have similar properties to granite , they are often referred to as black granites , something that rock-savers are reluctant to hear .

The rock is the namesake for the Gabbro Hills , a mountain group in the Antarctic.