Pluton (after Pluton , the god of the world of the dead in Greco-Roman mythology) is the geological name for an igneous intrusive body that crystallizes out very slowly within the earth's crust . 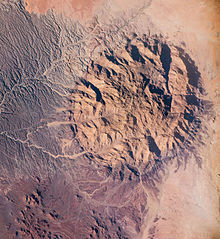 Brandberg massif , Namibia, a granite pluton exposed by erosion, taken from board the ISS

Plutons are formed when magma from the lower crust of the earth or the lithospheric mantle penetrates into higher crust levels, creates a magma chamber about five to ten kilometers below the earth's surface and slowly * solidifies in it. A pluton is therefore nothing more than a deep fossil magma chamber. The resulting rocks are called deep rocks or plutonites and as such are characterized by a relatively large-grain structure . The rock in which the magma chamber has established itself is called the host rock . These are often folded, often also dynamometamorphic rocks (see →  crystalline complex ). Plutons can be large in size (from a few kilometers to several 100 kilometers in diameter) and are usually sub-cylindrical to sub-spherical in shape. Particularly large, complex (multi-phase) plutons that represent several generations of magma chambers are also known as batholiths .

Above all, the heat that emanates from the magma changes the host rock in the immediate vicinity of a pluton compared to the more distant host rock. This form of rock transformation is called contact metamorphosis and the aureole of contact metamorphic rocks around a pluton is called contact courtyard . In addition, the roof area, i.e. the uppermost part of a pluton and the adjacent rock, is usually penetrated by corridors . These are either due to very mobile residual melts of the already largely solidified magma, or they testify to the further rise of the magma towards the earth's surface (see →  gangue rock ). The entirety of the corridors associated with a pluton is also referred to as the gang following .

According to their position in the magmatectonic cycle, a distinction is made between pre-, syn-, late- and post-tectonic, -kinematic or -orogenic plutons. Pre- and synorogenic plutons are usually deformed as a result of the subsequent or ongoing orogenic processes and the rock is sometimes also metamorphic . Examples of such subsequently deformed plutons can be found in abundance in the Precambrian shields .

Plutons are usually only accessible to direct observation after the rock overlying them has been eroded as a result of erosion . If the host rock is less resistant to weathering and erosion than the rock of the pluton, the part of the pluton that bites out is modeled as a massive mountain from the environment. Examples of such massifs include the Brocken in the Harz Mountains or the Brandberg Massif in Namibia.

If the host rock is more resistant to weathering and erosion than the rock of the pluton, then a basin or a morphological basin forms in the outcrop of the pluton. One example of this is the Thuringian main granite near Zella-Mehlis and Suhl . If the rock in the contact area is more resistant than both the pluton rock and the unchanged adjacent rock beyond the contact area, a ring-shaped wall is carved out of the landscape, as can be seen in the Bergen granite in Vogtland . 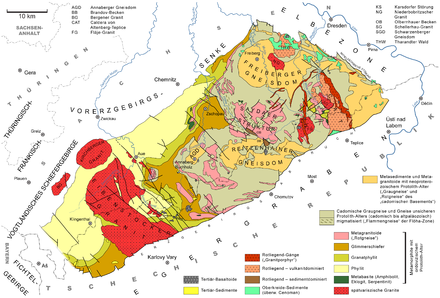 The geological overview map of the Ore Mountains shows some large outcrops of granitic plutons, especially in the Western Ore Mountains

Plutons are widespread worldwide, especially in so-called crystalline complexes , where they have taken place in predominantly medium-grade dynamometamorphic rocks (especially in gneiss and mica schists ).

The granite pluton that builds up Denali (Mount McKinley) has experienced enormously high uplift rates for about 5 million years, which explains the great height of the mountain.

* For the McKinley pluton in Alaska, cooling rates of 4 to 10 Kelvin per million years have been determined.