The Paleocene , also transcribed in specialist publications as the Paleocene (analogous to English Paleocene ), is a time interval in geological history , the lowest chronostratigraphic series (or epoch in geochronology ) of the Paleogene (formerly the Tertiary ). The Paleocene began around 66 million years ago and ended around 56 million years ago. It is classified between the Cretaceous , the last system of the Mesozoic Era (Earth Middle Ages), and the Eocene .

After the original division of the Tertiary into the three series Eocene , Miocene and Pliocene by Charles Lyell , the paleobotanist Wilhelm Philipp Schimper introduced the Paleocene as a further subdivision in 1847 . Schimper worked at the University of Strasbourg and wrote his work in French. The transcription of the word “paléocène”, which he introduced into geology, is controversial in German, and the spelling “Paleocene” is often used instead of the form “Paleocene”. The latter goes back to the view that Schimper pulled together the name of the period he founded, “paléocène”, from “pal (éo) -” and “-éocène” (meaning “Old Eocene”). In connection with Schimper's work there are more indications that he formed the term from the components “paleo-” (from Greek παλαιός = old) and “-cène” (from Greek καινός = new, unusual), so just like the other epochs of the Cenozoic era end in "-zän". The spelling “Paleocene”, which is mainly used in German today, is based on this view. The Stratigraphic Table of Germany from 2002, however, uses the Paleocene spelling. It remains to be seen whether the decision in favor of the Paleocene over Paleocene spelling has finally been made.

The lower bound of the Paleocene (and hence the Paleogene and Danian ) is the top of the Iridium anomaly of the Cretaceous-Paleogene boundary . The upper limit (and thus also the base of the Eocene and Ypresian periods ) is defined by a change in the carbon isotope ratio ("Carbon Isotope Escursion"). The GSSP of the Paleocene (and thus also the GSSP of Paleogene and Danium) is a profile at El Kef in Tunisia .

The Paleocene is divided into three chronostratigraphic stages

subdivided. A whole series of further levels were proposed regionally, which are either only in use regionally or have not been able to establish themselves as internationally recognized levels.

Distribution of the continents

The face of the earth differed significantly from today's conditions due to the distribution and arrangement of the continents in the Paleocene. At the beginning of the epoch there were still some contiguous parts of the old southern continent of Gondwana . Australia and South America were still connected to Antarctica , but Africa and India were already isolated further north. Between these southern continents and northern Laurasia , the Tethys wrapped itself around the earth like a belt. North America was connected to Europe via Greenland and also had contact with East Asia via the Bering Strait . Instead, a shallow sea , the Turgai Strait , which connected the Tethys Sea with the Polar Sea , formed the border between Asia and Europe.

The beginning of the Paleocene was marked by rapidly changing climatic conditions after the impact of the Chicxulub asteroid on the Cretaceous-Paleogene boundary . Due to the ejection mass of the impact of an estimated 50,000 cubic kilometers, a dense cloud of soot and dust particles was distributed throughout the atmosphere within a few days, which absorbed the sunlight for months and caused a global drop in temperature. An additional cooling factor possibly formed a layer of sulfuric acid - aerosols , which contributed significantly to an analysis suggests that the global average temperature for a few years below the freezing point decreased. After the relatively rapid breakdown of the sulfur compounds, a significant warming phase began, partly caused by more than 400 gigatons of additional carbon dioxide that the impact had released from marine carbonate and anhydrite rocks, and partly due to the volcanic CO 2 emissions of the Deccan Trap today West indies. In science, however, there is disagreement as to whether the main activity of this Magmatic Greater Province occurred before or after the Cretaceous-Paleogene boundary or was directly accelerated by the tectonic tremors of the asteroid impact.

In the oceans, the chemical composition of the near-surface water layers, including the pH value, resembled that of the late Cretaceous again after around 80,000 years, while the complete regeneration of the oceans down to the deep sea areas probably took more than 1 million years. With regard to the atmosphere, some studies postulate lower CO 2 values ​​of 300 to 450 ppm for the early and middle Paleocene than in the Maastrichtian , while other studies based on multiproxy evaluations calculated a mean value of 600 ppm with a correspondingly higher global temperature. The development towards a stable warm climate was interrupted in the later Paleocene (≈ 59 mya) by a worldwide cooling phase with a significant reduction in the CO 2 concentration. The relatively strong lowering of the sea level over several hundred thousand years indicates a temporary Antarctic inland freezing. Mountain formation processes ( orogenesis ) and tectonic shifts are the main reasons for the colder climate . The research here is the North Atlantic Magmatic Province United (English North Atlantic Igneous Province (NAIP) , also Thulean Plateau ), which during the formation and expansion of the North Atlantic was formed. The igneous or volcanic processes began as early as the early Paleocene (about 64 to 63 mya), extended in a much weaker form into the Miocene and recorded several increased activity cycles, with intrusive and effusive phases alternating along the diverging plate edges. The flood basalts rising from the earth's mantle had an area of ​​approximately 1.3 to 1.5 million km² and covered parts of Greenland, Iceland, Norway, Ireland and Scotland.

In the further course of the epoch the climate became warmer and more humid again. Sub- tropical vegetation flourished in Greenland and Patagonia , and the polar regions had a temperate climate. At the Paleocene-Eocene transition around 56 million years ago, there was a rapid global temperature increase of at least 6 ° C. The Paleocene / Eocene Maximum Temperature (PETM) was triggered by a sudden release of carbon dioxide or methane . Possible sources are methane hydrate deposits that have become unstable on the continental shelves , thawing permafrost soils or the outgassing of the North Atlantic Magmatic Greater Province . The duration of the temperature rise is estimated in the more recent specialist literature at around 4000 years. The return to the previous climatic state took about 170,000 to 200,000 years. 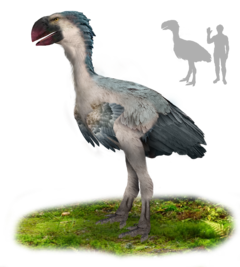 The Paleocene is characterized by the further development of the formerly small mammals , which rapidly increased in size and species after the extinction of the non-bird dinosaurs on the border between the Upper Cretaceous and the Paleocene and quickly occupied a large number of orphaned ecological niches . They benefited from the relatively rapid regeneration of the terrestrial biotopes and were thus able to record an initial increase in biodiversity and thus the formation of new species in the period 0.4 to 1.0 million years after the Chicxulub impact .

The birds , of which only a small part had survived the turning point of mass extinction , underwent a rapid evolutionary development spreading around the world, with large ratites of the Gastornis genus already appearing in the Middle Paleocene.

South America , which was isolated from other continents to Australo-Antarctica in the Paleocene and beyond in most of the Cenozoic , assumed a special status in this context . For this reason, an endemic fauna arose there , including mammalian forms such as armadillos , anteaters and three orders of marsupials .