Laurasia and Gondwana form Pangea in the global Panthalassa Ocean; to the east the Tethys

The Tethys , even Tethys Sea , Tethyssee or to distinguish from precursor Paleo-Tethys Ocean Neotethys called and the following succession sea Paratethys to distinguish where was earth's one ocean , predominantly in the Mesozoic and older Cenozoic existed. Most of it disappeared when Africa and India collided with Eurasia . Remnants of the seabed of the Tethys can be found northwest of Australia , in the eastern Mediterranean and in theBlack sea .

The name comes from Greek mythology . There Tethys is the sister and wife of the titan Oceanus . Eduard Suess suggested this name in 1893. A short street near Suess' last house in Vienna was therefore named Tethysgasse on the 100th anniversary of his death .

Like its predecessor, the Palaeotethys , the Tethys was an ocean in a huge bay in the east of the supercontinent Pangea . Its edges formed today's continents Asia, Europe, Africa and Australia, with India not being part of Asia, but rather being on the southern edge of the Tethys. This ocean had extensive shallow marginal seas ( shelves ) along the continental margin , especially in Europe. 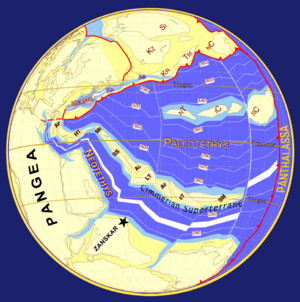 Paleotectonic representation of the eastern Pangea at the turn of the Permian Triassic. The Cimmerian Terranes have detached themselves from the southeastern edge of Pangea and are drifting northwards. Note the labeling of the ocean basins.

When Pangea broke up in Laurasia and Gondwana during the Jurassic (about 200–150 million years ago), the Tethys expanded to the west, and deep-sea basins were created where there had previously been shallow water zones or even mainland . During the Cretaceous and Tertiary periods , the Tethys closed between the remnants of Gondwana - Africa and India - which drifted counterclockwise to the northeast , and Eurasia , which drifted clockwise to the south and southwest. The Alpidian chains were created through the collision of Africa and India with Eurasia .

The sea basins of the Mediterranean , Black Sea, and Caspian Sea are remnants of the Neotethys. In the course of the Tertiary, the Alpidic chains that formed in Southeastern Europe and Western Asia increasingly divided the western Tethys into a northern and a southern part. The northern part is called Paratethys paleogeographically and the Mediterranean emerged from the southern part. While the so-called western and central Paratethys completely silted up in the Pliocene as a result of the advancing mountain formation in Southeast Europe , the eastern Paratethys is preserved today in the form of the Black Sea and the Caspian Sea.

Because both the part of Pangea, which is now Africa , and the part that is now Europe, were located significantly further south than Africa and Europe today and the average world temperature was higher, the Tethys area was predominantly tropical, in the European area at least a subtropical climate with coral reefs and an enormous variety of other marine animals.

Due to the fact that numerous shelf regions of the continents surrounding the Tethys were later included in mountain formations , the sediments of these shelves are now found in numerous young fold mountains in Europe and southern Asia. This makes them easily accessible to geologists and paleontologists and a. Provide information about life at the time of their deposition.