The name Perm is derived from the former Russian Governorate of Perm (roughly equivalent to today's Perm region ) at the foot of the Ural Mountains . The rocks exposed here from this period served Roderick Murchison in 1841 as the basis for his scientific description. The Permian in Germany and Central Europe is essentially represented by the two lithostratigraphic groups of the Zechstein and the Rotliegend . After this dichotomy, this system was originally called Dyas in Germany , but it was not able to establish itself internationally. The term Dyas was primarily defined lithologically and is therefore also used today for a lithostratigraphic supergroup that includes Rotliegend and Zechstein.

Subdivision of the Permian

The Perm was formerly mostly in Permian (299-270 million years ago) and Permian divided (270-251 million years ago), which would be called with today's terms as series. Today the Permian is divided into three series with a total of nine stages .

The earth in the sacmarium, about 290 million years ago

After the collision of Sibiria with the major continents Gondwana and Laurussia , which were already united in the Carboniferous , the supercontinent Pangea reached its greatest extent in the Lower Permian with an area of ​​138 million km² (including the shelf bases ). A mountain building phase in which the Urals were unfolded was the result of this collision. In the equatorial area the Tethys opened like a wedge to the east . An arm of the sea in the west of the Tethys reached as far as the European land masses. Large rift systems and epicontinental basins formed in Europe, which were filled with rubble from the now largely eroded Variscan mountains and with volcanic rocks ( Rotliegend basin). The first signs of the incipient disintegration of Pangea can already be found from the Upper Permian. 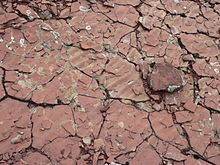 The permocarbone glaciation of the southern continents lasted well into the Permian and ended 265 to 260 million years ago in the Capitanium , with parts of what is now Australia apparently covered by ice caps the longest of all continental areas. In the temperate and cold zones of Gondwana, the Glossopteris flora, adapted to seasonal climatic fluctuations, grew up to high southern latitudes . During the Permian, many areas of the world had a dry and initially relatively cool climate , although temperatures often reached tropical values in the desert-like central areas of Pangea . The richest salt deposits in the history of the earth were formed during the Permian period.

After the end of the Permocarbon Ice Age , the trend towards a stable warm climate emerged , but this was interrupted by a major environmental change 260 million years ago. The decline in biodiversity in tropical waters, which has long been known in research and assessed differently in terms of extent, was, according to more recent findings, a global event that culminated in the mass extinction of Capitanium . A massive carbon dioxide and sulfur dioxide input into the oceans with the formation of anoxic zones and strong acidification of the sea water is assumed to be the cause. A direct connection with the simultaneously occurring flood basalts of the Emeishan Trapps in today's southern China is considered very likely in research. The differently pronounced activity cycles of the trap probably lasted almost two million years and during this time covered an area of ​​at least 250,000 km² with basaltic deposits. Although the extinction event primarily affected the marine fauna of all climatic zones, the biodiversity of terrestrial vertebrates also decreased significantly. It is believed that over 60 percent of the species and 33 to 35 percent of the genera died out during the Capitanium Crisis.

Towards the end of the Permian, on the border with the Triassic , there was a rapid climate change in geological terms with far-reaching consequences for the terrestrial biosphere . The main possible cause are large-scale volcanic activities in the area of ​​today's Siberia ( Siberian Trapp ), which lasted several hundred thousand years and covered seven million square kilometers, sometimes several kilometers thick, with basalt . There are several hypotheses about the trigger (s) of these sudden eruptions, and the involvement of a large meteorite impact is occasionally discussed in this context . By the end of the epoch, around 96 percent of all marine life and around 75 percent of land life, including many species of insects, had died out. The vegetation cover of the continents also thinned out significantly. Thus, during the Permian Triassic Crisis, probably the largest mass extinction in the history of the earth occurred .

More recent isotope studies indicate that in an initial warming phase, the average temperatures of the atmosphere rose by 5 ° C within a few millennia due to the increasing concentration of volcanic carbon dioxide. At the same time, the oceans warmed up to a considerable extent, which led to the formation of oxygen-free sea zones and the large-scale release of methane hydrate . As a result of the additional methane input, the temperature increased by a further 5 ° C in the next phase, and the oxygen content of the air fell to 16 percent or was temporarily even lower. Another possible cause for the collapse of almost all ecosystems is the proliferation of certain marine protozoa, which released their metabolic products into the atmosphere in the form of halogenated hydrocarbons , hydrogen sulfide or methane. The total duration of the mass extinction has until recently been given as 1 million to 200,000 years, while more recent research initially postulated a period of around 60,000 years. According to a study published in 2018, the extinction event took place within a maximum of 30,000 years, possibly limited to a few millennia, and could be assigned to the lowest Triassic 251.94 million years ago using precise dating methods.

Reconstructed scene from the older Middle Perm of Russia: the carnivore Ivantosaurus (right) meets a resting group of Estemmenosuchus ( left), both Therapsids of the Otschor fauna

Among the terrestrial vertebrates there was a first major radiation of the groups that are grouped under the name amniotes , and the amphibian-like groups that still predominated in the Carboniferous have largely lost this dominance. Many species-rich groups of reptile-like amniotes that appeared during the Permian disappeared again during the Permian or at the end of this period, e.g. B. the mesosaurs or the pareiasaurs .

The first therapsids appear in the Middle Permian , more modern forerunners of today's mammals , but at that time they were still relatively reptile-like. "Primitive" Therapsids of the Permian are known in Eurasia mainly from the eastern part of the Russian tablet or the western Ural foothills ("Pri-Ural") in Russia and from the Xidagou formation in China, whereby these finds reflect the variety of forms at that time Reflect the northern hemisphere. Forms of the former southern hemisphere (subcontinent Gondwana ) can be found today in the deposits of the Beaufort group in the South African Karoo and in sedimentary rocks of the Paraná basin in southern Brazil .

Among the unicellular foraminifera , the large fusulins are important key forms. They disappeared at the end of the Permian, as well as to the coelenterates counting taboo laten coral . The arm pods went through one last great radiation . In the Permian, for example, coral-like shapes (compare with the rudists ) and shapes with slotted dorsal valves (oldhaminides) that entered into a symbiosis with photosynthesis-inducing bacteria. These specialized groups and some other groups (Productiden, Davidsoniiden and Spiriferiden) died out completely or largely. Among the arthropods, the trilobites and the Eurypterids became extinct. A number of insect orders could first be detected in the Permian. Among the molluscs , the class of the beaked scarf (Rostroconchia) disappeared . Among the cephalopods, the bactrites and the goniatites died out; the Ceratites arose. From the trunk of the echinoderms (Echinodermata), the bud rays (Blastoidea) and the sea ​​lily groups of the Camerata and Flexibilia died out.

Representation of a typical tongue-shaped leaf of the genus Glossopteris

The change from the Paleophytic to the Mesophytic took place earlier than the change from the Paleozoic to the Mesozoic. The paleophytic ended about 256 Ma ago in the Wuchiapingium . The previously dominant groups of ferns have been replaced by the more drought-resistant naked-seed plants (gymnosperms). The Glossopteris flora developed on the Gondwana continent , the representatives of which were deciduous, cold-tolerant gymnosperms with the predominant order Glossopteridales .

The Permian in Central Europe

In Germany, the traditional division of the Permian into Rotliegend and Zechstein results from the striking change that has taken place on the border between the two formations. After a long continental period, which began in the Carboniferous, about 257.3 million years ago a tropical shallow sea penetrated into northern and central Germany in what was probably a very brief transgression , which marked the beginning of the Zechstein Age. Only southern Germany initially remained mainland. The economically important copper shale was deposited at the base of the marine deposits . This geological mark is one of the most distinctive guiding horizons in Germany.

For the entire duration of the Permian, today's Central and Western Europe was part of the supercontinent Pangea in the tropical climate zone, i.e. in the immediate vicinity of the equator and thus in the area of ​​a seasonally occurring, very strong monsoon current . At the beginning of the epoch at about 5 ° south latitude, these areas shifted in the course of almost 50 million years in the course of continental movement towards the 10th north latitude. During this time there was a relatively frequent change between humid (damp) and arid (dry) phases. The pronounced monsoon system between latitudes 30 ° north and 30 ° south also determined the weather over the course of the year. In the summer months the monsoon wind transported humid air masses from the tropical Tethys to the European regions of the time, while in winter dry continental air flowed in from the north.