The title of this article is ambiguous. Further meanings are listed under basalt (disambiguation) .

Basalt prisms on the Gangolfsberg in the Rhön 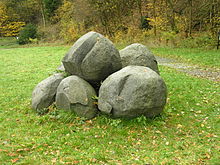 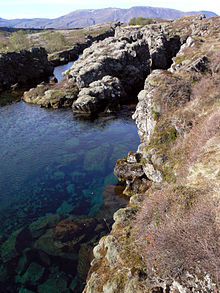 Basalt is a basic ( SiO 2- poor) cast rock . It mainly consists of a mixture of calcium - iron - magnesium - silicates ( pyroxene ) and calcium - and sodium - rich feldspar ( plagioclase ) as well as mostly olivine . Basalt is the volcanic equivalent of gabbro ( plutonite ), which has the same chemical composition.

The dispute about the origin of the basalts, also known as the basalt dispute, which took place around 1800 , developed into an ideological dispute between Neptunism and Plutonism .

History and origin of the name

The Etymological Dictionary of the German Language notes that basalt has been detectable in German since the 18th century and was borrowed from the Latin basaltēs . This Latin word can be found, referring to the natural history writings of Pliny the Elder , in Georgius Agricola in his work De Natura Fossilium (1546). Agricola refers to, among other things, the columnar, fissured rock from which the natural rock base and the walls of Stolpen Castle are made.

The word basaltes probably goes back to a medieval transcription error in Pliny’s writings, in which he otherwise uses the Latinized version of the Greek rock name βασανίτης [λίθος] basanítēs [líthos] ( touchstone , very hard stone). The Greek word may have its origins in Egyptian . The Russian petrographer Franz Loewinson-Lessing states in his lexicon that basalt is "one of the oldest petrographic names" and that it originally comes from Ethiopian . Accordingly, basal (or bselt or bsalt , literally: 'cooked' (?)) Should mean 'iron-bearing rock'. Loewinson-Lessing also states that, according to Pliny the Elder, the first basalts came from Ethiopia. Whether the region was really Ethiopia and these rocks were really (exclusively) basalt in today's understanding is questionable. The American archaeological geologist James A. Harrell postulates that Pliny basanites is identical to the Egyptian behen-stone , which is a meta greywacke that occurs in the Wadi Hammamat and was also mined there. In fact, both basalt and greywacke are (relatively) fine-grained, very hard, greyish and brownish weathered rocks, which can easily be confused if there are no typical structural features (especially with basalt the columnar fissures) in the outcrop without optical aids. Due to this ambiguity in Pliny’s writings, Agricola can be regarded as the first description of the basalt rock type in today's understanding and the rock base of Stolpen Castle as a type locality of this rock type.

Abraham Gottlob Werner characterizes basalt in his description of the various mountain types published in 1787 as a "mixed rock type", which, in addition to the " main mass " ( could not be broken down into its mineral components at the time due to the lack of a method for rock microscopy ), "usually hornblende crystals and krisolite grains, rarely contains zeolite ”. Louis Cordier restricted the name to a composition of augite and labradorite with varying proportions of olivine in 1816 . Karl Heinrich Rosenbusch formulated a new definition in 1887.

Geologically old basalts are referred to as diabase and melaphyr , which have also undergone a slight change in their structure and mineral composition through metamorphosis .

Basalt is formed when the earth's mantle melts . Thin, low SiO 2 magma cools down relatively quickly on the earth's surface or in the ocean when it emerges into basaltic lava . When they exit, the magmas usually have temperatures between 900 ° C and 1200 ° C, depending on their chemistry. The magma is usually not 100% liquid, there are often also inclusions ( Xenocryst ) of minerals or whole rocks ( Xenolite ) with a higher melting point, which were carried away during the ascent.

Column basalt on Iceland in Kirkjubæjarklaustur

Basalt is the most widespread rock, considering both the mainland and the seabed. Of these, the tholeiitic basalts named after the town of Tholey in Saarland form the main part of the oceanic crust and a number of occurrences of the continental crust .

Almost all deep ocean floors consist of basalt, which there is only covered by a more or less thick blanket of younger sediments . The lava rises along the global mid-ocean ridges and creates new ocean floor between diverging tectonic plates due to the cooling rock melt . But there are also other areas where marine basalt is produced. Depending on the place of origin, the basalt is called

The basalt types differ in their chemical composition due to the different formation processes.

Basalt is also widespread on the mainland and is mostly tied to tectonic weak zones such as rift breaks or hot spots that occur on the mainland. The following rule applies: where there is a lot of basalt, there is little rhyolite .

Gray basalt, one of the most important road surfaces between 1850 and 1930

Basalt is usually dark gray to black. Since it arises volcanically, due to the rapid cooling it consists for the most part of a fine-grained matrix. Coarser, with the naked eye to be recognized phenocrysts are relatively rare, but may occur more frequently in some Basaltvarietäten.

The appearance of cooled basaltic lava depends mainly on two factors. Erupted lava cools down very quickly to form a coherent rock structure, which solidifies as Pāhoehoe lava or Aa lava , depending on the temperature and gas content . However, if the cooling takes place with a delay, the contraction often results in meter-long angular basalt columns (columnar basalt) that are perpendicular to the cooling surface, preferably with a hexagonal (hexagonal) geometry. A rather seldom appearing form of basalt is spherical basalt, which is preferably found on the edges of basalt deposits.

Basalt often has ferromagnetic properties because it can contain small amounts of magnetite .

Classification of basalts according to mineral composition

All basalts have a basic, i.e. low-SiO 2 composition. The predominant mineral groups are plagioclase (mostly labradorite ) and pyroxene , predominantly the clinopyroxene augite . Olivine and foide occur in some basalt deposits, and occasionally also biotite and hornblende . Alkali feldspar and quartz , on the other hand, do not occur in basalts or only to a minor extent.

The following list gives an indication of the chemical composition: 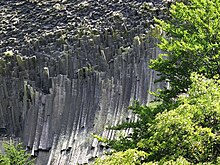 Basalt fan on the Hirtstein in the Ore Mountains

Outside of Central Europe

Basalt on other celestial bodies

Basalt is also a common rock on all terrestrial planets ( Mercury , Venus , Mars ) and the moon . Many meteorites also have the same chemical composition as basalt. With their help one can draw conclusions about the formation of our solar system . 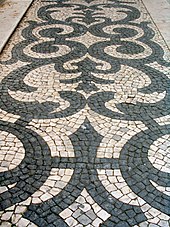 Basalts are used for solid buildings, floor and stair coverings, facade panels , grave and monuments and in stone carving. In addition, basalt is mainly used as a building material for the sub-construction of roads and railroad tracks due to its pressure-resistant and wear-resistant, difficult to work, but not too brittle character . Until 1950/1960 it was used as a mosaic, small and large pavement in path and road construction . To this day it is used again and again in gardening and landscaping as a plaster (new / used), but abrasion makes the surface smooth and slippery when wet. As an example of the blues or hard basalt (whether foidite -Lava) called.

Houses made of basaltic rock are also being built near volcanoes, which gives the villages a dark character. B. Localities in the Eifel ( Mendig ) and around Mount Etna in Sicily . Basalt buildings are very typical of the Hauran in southern Syria . They were built in the Bronze Age and, because of the longevity of the material, are often inhabited for several centuries, sometimes even today.

Basalt crosses have been placed at waypoints for centuries . Numerous historically significant basalt crosses are mainly in the Mayen area in the Eifel .

Basalt was also used for medium-quality millstones, for example in the Eifel ( Mendig ). The possible diameter was based on the thickness of the basalt columns.

In the area of ​​the eastern Bohemian Central Uplands (České středohoří) and up to the Zittau Mountains there are isolated buildings in villages and small towns, the base masonry of which is made up of superimposed basalt columns of approximately the same length. The column heads thus form the outside of the base if it is not plastered. In some rural settlements, a few garden walls of this type have been preserved. It is remarkable that basalt columns can only be split transversely with great effort.

The so-called sunburner basalt is a special form, which breaks down easily and is therefore unsuitable for many technical applications. The cause for the decay is in its high content of analcime , which very easily weathered .

The "basalt dispute" in the late 18th century was a dispute about world views, world views and world explanations. It is to be assessed as an important step in the context of the processes, as a result of which our “modern” worldview and the “modern” society emerged. The basalt dispute was ostensibly a scientific discussion, but it arose out of a theological question. On the part of the " Neptunists ", led by Abraham Gottlob Werner , the discussion remained colored for a long time by the accounts of creation in the Bible. Based on the Tohuwabohu , Moses 1: 1–2: In the beginning God created the heavens and the earth. And the earth was desolate and empty, and it was dark on the deep; and the Spirit of God floated on the water. the origin of basalt was derived from the primordial ocean. The “ Plutonists ”, led by James Hutton , were more consciously distancing themselves from the biblical account and were finally able to prevail. Hutton's worldview was by no means atheistic, but deistic - God had arranged the world according to his plan, but did not intervene immediately afterwards. Johann Wolfgang Goethe addressed the dispute in various works as well as one of the discussions recorded by Eckermann , and in 1827 in a poem dedicated to the USA:

America, you are better off than
our continent, the old one,
Has no dilapidated castles
And no basalts.
You don't bother inside,
At living time,
useless memories
and futile arguments.
...