This article covers the city of Mendig. For the film producer see Hans Joachim Mendig .

Mendig is a town in the Mayen-Koblenz district in Rhineland-Palatinate and the administrative seat of the Mendig community . According to state planning, the city is designated as the basic center.

The city of Mendig is located in the East Eifel not far from the Rhine , about five kilometers from Lake Laacher in the Laacher volcanic area.

Many cinder cones and especially the Laacher See volcano have repeatedly shaped the landscape through volcanic eruptions for around 450,000 years. The well-known Niedermendig millstone quarries were created in a lava flow that emerged from the Wingertsberg volcano, not far from Lake Laacher, about 200,000 years ago. The large Lavakeller ( rock cellar ), today one of the attractions of the city, created when basalt dismantling of Mendiger millstone - Lava . The lava is covered by around 30 m of loess and pumice from the eruption of the Laacher See volcano around 13,000 years ago and has therefore been mined underground since Roman times (as evidenced by coin finds).

Tunnel in the mountain

The temperature-stable tunnels (5–8 ° C) became fermentation and storage cellars for at times 28 breweries after the decline of the millstone industry due to the introduction of steel rollers in the milling industry from 1843 . Because of this high number of breweries, Mendig has the reputation of a “beer brewing town” to this day. Today there is still a local brewery and brews for its own restaurant and customers from the region. Some of the former beer cellars are open to visitors.

Mendig was first mentioned in a document as menedich in 1041 .

From Roman times until the 19th century, Mendig flourished thanks to the mining and processing of basaltic lava, especially as millstone and for stone. Mendiger basalt lava is still a term for a solid, durable stone. In the 19th century, the underground quarries were used as fermentation and storage cellars for 28 Mendig breweries.

The development of the population in relation to today's urban area of ​​Mendig; the values ​​from 1871 to 1987 are based on censuses:

The city ​​council in Mendig consists of 24 council members, who were elected in a personalized proportional representation in the local elections on May 26, 2019 , and the honorary city ​​mayor as chairman.

Hans Peter Ammel (SPD) became mayor of Mendig in 2009. In the runoff election on June 16, 2019, he was confirmed in office for another five years with a share of the vote of 53.74%, after none of the original three applicants had achieved a sufficient majority in the direct election on May 26, 2019.

The city of Mendig has had a partnership with the city of Yerres in France since 1966 .

There are shops and supermarkets in the city, medical practices of various disciplines, four kindergartens, a youth club, a primary school and, since August 2010, the secondary school plus Mendig, which has been made up of secondary and secondary schools .

The Mendig station is located on the Eifelquerbahn and managed by the Lahn-Eifel-Bahn ( Kaisersesch - Mayen - Andernach - Koblenz Hbf - Niederlahnstein - Bad Ems - Diez - Limburg an der Lahn served). The regional train lines RB 23 and RB 38 of the DB Regio run here every hour, every day , according to the Rhineland-Palatinate cycle . Due to the location of Mendig in the district of Mayen-Koblenz , the tariff of the Verkehrsverbund Rhein-Mosel VRM applies .

Regular bus lines from / to Andernach / Neuwied and Koblenz and to Mayen (to the west). The city belongs to the Rhein-Mosel transport association. It is also connected supraregionally with long-distance buses , whose direct connections lead on the one hand within Germany with the line via Bonn-Cologne-Düsseldorf or to Trier, but also to other European countries to Luxembourg, various cities in France (such as Metz or Dijon) and to Barcelona in Spain.

From 1958 to 2007 Mendig was a garrison town. Army aviators of the Bundeswehr with transport and liaison helicopters were stationed in the Gunther Plüschow barracks , most recently the Army Aviation Brigade 3 . The Bundeswehr gave up Mendig airfield in the course of the transformation .

The airfield is now approved as a civil airfield (special landing site).

The Lava Dome in Mendig

The lava cellars 32 m below Mendig 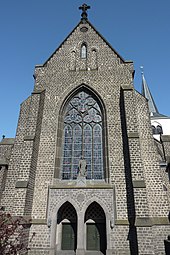 In the context of Eifel tourism, in addition to geologically interesting parts of the landscape in the municipality, Mendig's inner city with its typical basalt architecture is also worth seeing. Since 1987 the city has been the seat of the German Volcanological Society .

The German Volcano Museum Mendig " Lava Dome ", which specializes in Mendig basalt mining and volcanology, has been attracting numerous foreign visitors since it opened in summer 2005.

The lava cellars were created through the underground basaltic lava mining and can be visited on guided tours.

The Museumslay is an open-air exhibition on basalt mining and processing.

The Catholic parish church of St. Cyriakus in the Niedermendig district forms an ensemble of a small, vaulted, three-aisled pillar basilica from the 12th century and a large neo-Gothic hall church.

The old church is dedicated to Cyriacus of Rome , the new to Cyriacus and Barbara . As one of the 14 helpers in need, Cyriakus is the patron saint against temptation and obsession as well as the saint of hard workers. Barbara is the patroness of the miners. Both were particularly venerated by the stone carvers in Mendig.

The three-aisled Romanesque basilica was built between 1166 (1175) and 1186. The vault and a larger part of the roof structure date from this time. The west tower was still under construction in 1216 and heightened it in 1474. Around 1460 a Gothic chapel was added to the choir.

The old church has wall paintings from the time it was built as well as from the 13th century and the time around 1300, as well as a third of Anna herself from around 1470 on the inside of the left front pillar. They were uncovered at the end of the 19th century and secured and cleaned again in 1950 and 2006. The pictures reflect the beliefs of the people of that time in great variety and they are a rare document of early Gothic painting on the Middle Rhine and in the Eifel, especially since they are located in a former village church.

The 6 m high St. Christophorus on the north wall, carrying the adult Christ. Then the south and north walls were decorated with the twelve apostles, at the same time the impressive Last Judgment was created above the choir arch. Two pictures represent St. James is, even with Jacob pilgrims in Santiago de Compostela, crowned by James, and once with Charlemagne. They should evidently encourage pilgrimages or remind them of pilgrimages.

The neo-Gothic church was built by the Cologne cathedral master craftsman Vincenz Statz in the years 1852–1857. It was consecrated on September 22, 1857. Outside and inside, the Mendig basalt lava dominates, which has brought Mendig economic importance and growth. The design of the large new church is based on the Cologne Minorite Church . Little has been preserved of the neo-Gothic furnishings. Today the room is dominated by the mostly abstract glass windows by the Trier artist Reinhard Heß from 1960 to 1971.

The focal point of the new church is the high altar with an altar triptych from the Lower Rhine from around 1490 and four smaller picture panels as a predella . The triptych shows Christ on the way to the crucifixion, the lamentation of Christ before the cross and the resurrection of Christ. The backs of the outer wings show the Saints Laurentius, Genoveva of Paris, Maria and Sebastian. The small panels from the school of Geertgen tot sint Jans show scenes from the childhood of Jesus.

The Catholic parish church of St. Genovefa in Obermendig has a Romanesque tower from the 12th century, which was joined by an early Gothic hall church around 1350 . In 1879 the church was extended to the east by Friedrich von Schmidt , a transept was added and the choir was rebuilt using the old stone parts. Furthermore, the central nave was raised to a basilica .

The rich use of tuff for pillars and pilaster strips is remarkable . The Mount of Olives Group (16th century) on the north exterior of the church and the reliquary of St. Genoveva in the north aisle . 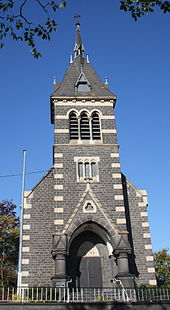 The VC Eintracht Mendig volleyball team played in the 1st Bundesliga . Due to limited financial possibilities, the first division volleyball team no longer entered the 1st Bundesliga for the 2005/2006 season and played with great success in the regional league. The team won the championship in 2006, 2007 and 2008. In 2011 they were promoted to the top of the table in the 2nd Bundesliga South. The association was renamed again in 2006 to "VC Eintracht Mendig 1996 eV" and is supported by the "Vulkanpower Mendig" fan club .

The game community SG Eintracht Mendig, consisting of the football departments of the clubs Eintracht (Nieder-) Mendig, Grün-Weiß (Ober-) Mendig and Bell, is playing for the championship in the Rhineland League after being promoted from the district league.

In the 2012/13 season, the 1st handball team of Grün Weiß Mendig took 4th place in the men's association league.

The Judo and Ju-Jutsu Club 1957 e. V. Mendig is one of the most traditional clubs in the city with its more than 50-year history. After the beginnings in an old workshop in Heidenstockstraße (former Gottschalk estate, today Berresheim), the great age of Mendiger judoka began with fights by Heinz Junglas † and Wolfgang Kasper † against world champions Wim Ruska and Anton Geesink (both NL) and many times over German master Klaus Glahn. The youth department is one of the most successful in the Rhineland Judo Association and has training locations in Mendig, Adenau and Rieden.

The MGV Mendig e. V. is a male choir that emerged from the Amicitia and Eintracht choirs through a merger. The choir performs on secular and religious occasions, offers its own concert events and participates in other concerts.

A Rhenish carnival is celebrated in Obermendig. The Carnival Society Obermendig 1903 e. V. (KGO) organizes 3 meetings and the traditional Möhnen afternoon every year.

The Hussar Corps Jack von der Wasserschöpp is the largest carnival corps in town with its own music corps, dance corps, guard corps and cadet corps. The hussars are not only active at carnival, but also take an active part in the maintenance of customs, environmental protection and landscape maintenance. The Hussar Corps is a division of the Carnival Society Obermendig 1903 e. V.

Kul-Tour Mendig is an association for the promotion of culture. The focus of the work is the implementation of comedy and cabaret events together with the city of Mendig and the Kreissparkasse Mendig.

The Mendiger Gambrinusfest has been held every two years since 1973 by the three supporting associations KG Niedermendig, SG Schlich and MGV Mendig e. V. and is one of the largest beer and folk festivals in the region. The beer brewing tradition is celebrated in Mendig with the king of beer brewers Gambrinus . Traditionally, the festival begins on Ascension Day (Father's Day) and ends on the following Sunday.

The Rock am Ring festival site at Mendiger Airfield, 2015

Rock am Ring , the internationally known music festival, which took place annually at the Nürburgring until 2014 (since 1985), changed its venue to Mendig, where it took place in 2015 and 2016. The background to this move was the termination of the contract by the operator of the racetrack. After the name dispute was decided in favor of the operator by the Higher Regional Court of Koblenz, this event was held from June 5th to 7th on the former Bundeswehr airfield in Mendig. For the first time, the Mendig region was able to look forward to internationally known musicians such as Marilyn Manson, Papa Roach, Motörhead, Rise Against, Slipknot, The Prodigy or the Foo Fighters. But national musicians such as Die Toten Hosen, Clueso, Kraftklub or Deichkind also performed. However, this move also presented the organizer with new challenges in terms of nature conservation.