This article covers the city of Vallendar; for further meanings see Vallendar (disambiguation)

The city of Vallendar (pronounced / 'fa.lɛn.ˌdaːɐ̯ /) is a medium-sized center in the district of Mayen-Koblenz in Rhineland-Palatinate . It is the administrative seat of the Verbandsgemeinde Vallendar , to which it also belongs.

The settlement area of ​​the city of Vallendar extends on the right bank of the Middle Rhine opposite the inhabited Rhine island Niederwerth , where several stream valleys of the Westerwald meet the Rhine valley. The city is located 5.7 km north of Koblenz and 12.3 km south of Neuwied in the Neuwied Basin , part of the Middle Rhine Basin . In the east the heights of the Westerwald rise, beyond the Rhine in the west the heights of the Eifel .

The location in the stream valleys is the origin of the name, whereby the syllables “val” and “ndar” have to be distinguished. Both syllables have Indo-European roots: "val" means "flowing", while "ndar" indicates "swampy terrain". Vallendar is first mentioned around 830/840 as a property of the archbishops of Trier , but it is assumed that it is of Celtic origin and therefore much older (700–600 BC).

The Trier electors had their property administered by bailiffs who, however, were increasingly able to withdraw the property from the access of the electors. After all, the Counts of Sayn have been sovereigns since 1232 and in 1240 built a castle at the northern exit of Vallendar, on the foundation walls of which the "Haus d'Ester", the so-called "Marienburg", stands today. In addition, Vallendar received city walls at this time. In 1143 the Schoenstatt Augustinian Monastery was founded, which was dissolved again in 1567.

In 1363, Count Salentin zu Sayn-Wittgenstein pledged the rule to Kurtrier . Since the 14th century, the Archbishop of Trier was co-owner of the Vallendar domain . In 1681 and 1767 (finally) Trier became the sole sovereign. The city's coat of arms with the sayn lion and the electoral Trier red cross refer to this territorial history.

In 1803 the place came to the Principality of Nassau-Weilburg , in 1815 finally to the Kingdom of Prussia . In the 19th century a rich commercial activity, which was a reason that Vallendar on 2 November 1856 by King developed Friedrich Wilhelm IV. The town charter was awarded. After the First World War , the city was the target of a military action by the 23rd US Infantry in 1919. Vallendar has been a recognized climatic and Kneipp health resort since 1932 . In 1939 the community Mallendar was incorporated. From 1954 until the 1970s, numerous new building areas were built. In 1958 the bridge between Vallendar and the Rhine island Niederwerth was inaugurated. In 1973 the “Humboldthöhe” high-rise building, which defines the townscape, was completed.

Today the picture Vallendars is strongly influenced by the internationally famous pilgrimage town in the district of Schoenstatt, where the by Josef Kentenich founded in 1914 in a small dilapidated Marienkapellchen Schoenstatt Movement has now developed city of pilgrimage into a regular. The founding chapel is a famous place of pilgrimage and is now surrounded by numerous educational institutions, sister houses, other chapels and the large adoration church .

The development of the population of Vallendar in relation to today's urban area, the values ​​from 1871 to 1987 are based on censuses: 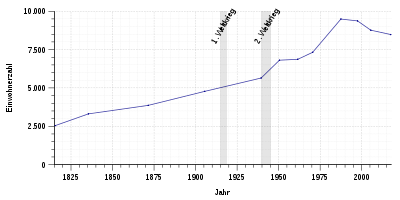 The city ​​council in Vallendar consists of 24 council members, who were elected in a personalized proportional representation in the local elections on May 26, 2019 , and the honorary city ​​mayor as chairman.

Mayor of Vallendar is Wolfgang Heitmann (SPD). In a runoff election on June 16, 2019, he prevailed against the previous incumbent Gerd Jung (CDU) with a share of 62.13% of the vote, after none of the original three applicants had achieved the necessary majority in the direct election on May 26, 2019. The inauguration of Heitmann took place during a city council meeting on June 25, 2019.

The city mayor is supported by three honorary councilors elected by the city council.

Declaration of the coat of arms: The golden lion is the Sayn lion, the red cross the Trier cross ( Kurtrier ); both symbols indicate the former territorial rule.

Road map of the Koblenz area

Map of the railway facilities in the greater Koblenz area 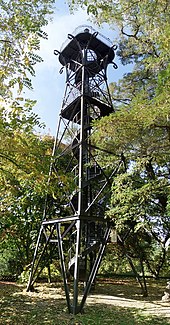 The Kaiser Friedrich Tower in Vallendar

Vallendar is located on the B 42 and the A 48 , the exit of which leads to Bendorf / Neuwied / Vallendar via the B 42 into the town center.

Vallendar has a train station on the right bank of the Rhine . The trains of the Rhein-Erft-Bahn RB 27 run from Koblenz Hbf via Neuwied , Bonn-Beuel and Cologne to Mönchengladbach every hour according to the Rhineland-Palatinate cycle.

The evm bus lines 7 and 8 connect Vallendar with Koblenz , Bendorf and Höhr-Grenzhausen .

The RMV bus routes 318 and 319 connect Vallendar with Koblenz and the Westerwald.

The following people were born in Vallendar:

The following people worked or are currently working in Vallendar:

Vallendar is home to TV Vallendar, founded in 1878, which offers gymnastics, basketball and volleyball. Numerous German champions have emerged from the Vallendar gymnastics club. In addition, there has been the HV Vallendar since 2010 , which plays in the 3rd League South and previously made up the handball department of the TVV. The Vallendar-based 1. SC Mayen-Koblenz has played in the 1. Snooker Bundesliga since 2016 .

In the soccer field, there is the SC Grün-Weiss Vallendar, which was founded in 1908. The senior division consists of three teams. The 1st senior team plays in district class A in Koblenz, the 2nd senior team in district D Koblenz and the "old men" only take part in friendly games sporadically.

A place called "Vallendar" is a setting in the computer game Call of Duty 2. This fictional place is on the Rhine. The player's task is to defeat retreating German soldiers in World War II. Apart from the location on a river, the depicted city has no similarities with the real place.