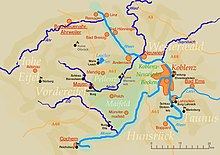 The Middle Rhine Basin is the central partial landscape on the Middle Rhine and, together with the Limburg Basin, forms one of the larger intramontaneous subsidence areas within the Rhenish Slate Mountains . The valley is divided into the valley widening of the Neuwied Basin , the right bank Neuwieder pool deck and left bank in the Lower Moselle valley in the south and the Maifeld-Pellenzer hills in the north.

The basin is bounded on the right bank of the Rhine in the northeast and east by the slopes of the Westerwald and on the left bank of the Rhine from north to southwest by the Eifel and in the southeast by the valley of the Moselle above the Moselle core . Its mild winter and rain-free climate enables intensive agricultural use, which also causes the poor forest of this landscape.

This valley widening, also known as the Koblenz-Neuwied Basin , and located between the cities of Koblenz and Neuwied , separates the narrow valley of the upper and lower Middle Rhine over a length of approx. 22 kilometers . Due to its fertile soil, the Neuwied Basin has been inhabited since the earliest times. The landscape today is characterized by intensive fruit cultivation as well as industrial settlements. In the compression chamber of the Neuwied Basin approximately 300,000 inhabitants.

The Elzbach and Eltz Castle

This south-western part of the Middle Rhine basin is particularly noticeable due to its slight hills. It is bounded by the river valleys of the Moselle (to the south-east) and the Elz (to the south-west) cut deep into the hill country ; Northwest border is z. T. the nice one . This area is mainly used for agriculture. The soils are considered particularly fertile. Cities in the Maifeld are Polch (seat of the Maifeld Association in the Mayen-Koblenz district , but strictly speaking located in Pellenz ) and Münstermaifeld .

This hill country forms the north-western part of the valley between Mayen and Andernach . It is characterized by agriculture and opencast mining ( pumice and lava sand ) and the associated building materials industry. The small river Nette flows through the hilly landscape, gently sloping from west to east towards the Rhine , with its memorable volcanic peaks (which are mostly excavated) , limiting the landscape mainly south to the Maifeld .

The predominantly industrial towns of Plaidt , Ochtendung , Kruft , Nickenich and Kretz ( Pellenz volcanoes , east) as well as Niedermendig (today Mendig ), Kottenheim , Thür ( Pellenzsenke , west) and the Polch ( Pellenzhöhe , south), which protrude into the Maifeld belong to Pellenz . The area is conveniently located on the A 61 motorway and the Eifel-Pellenz Bahn . During excavations in Pellenz, settlement remains from over 300,000 years ago, Celtic as well as Roman settlement remains and burial grounds were found. The Wernerseck Castle is interesting for tourists .

Pellenz is also the name of a municipality in Rhineland-Palatinate , which includes the north of the Pellenz landscape and is based in Plaidt .