from Wikipedia, the free encyclopedia
map

The Eifelquerbahn is a non-electrified railway line between Andernach and Gerolstein in the Eifel . From Andernach to Mayen Ost it is classified as a main line and has two tracks as far as Mendig .

The Eifelquerbahn is used today between Andernach and Mayen Ost every half hour and further to Kaisersesch every hour by the Lahn-Eifel-Bahn .

Before that it was operated for a long time between Andernach and Kaisersesch as the “ Pellenz- Eifel-Bahn” every hour. The section between Kaisersesch and Gerolstein had at times services of the railway company of the same name under the name "Vulkan-Eifel-Bahn" in leisure traffic, but this section of the route has been closed since 2013.

A rail bus set is waiting for the return journey to Gerolstein on September 10, 2011

The Eifelquerbahn was opened in several stages, first on April 1, 1878, the section from Andernach to Niedermendig. This was followed by the second section from Niedermendig to Mayen Ost on May 29, 1880 and the third section from Mayen Ost to Gerolstein on May 15, 1895. A connection to Karden was considered between Mayen West and Monreal. From around 1880 the Eifelquerbahn was under the responsibility of the Cologne Railway Directorate of the Prussian State Railways .

After the Second World War , the line from Andernach to Mayen Ost was reopened on April 8, 1945. The part from Mayen Ost to Gerolstein did not follow until August 29, 1946.

On August 6, 2000, a few months after trans regio took over operations between Andernach and Mayen, the route was reactivated for passenger traffic from Mayen West to Kaisersesch in a three-year trial run. Operation on the reactivated section was continued after the trial operation ended.

The section from Gerolstein to Kaisersesch has been used for tourist traffic since June 2, 2001 in the season from May to October. The excursion trips were initially only organized on Sundays and public holidays, and later also on Saturdays, at two-hour intervals. Because of the poor condition of the track, the journeys ended in Ulmen. From July 18, 2005, there was daily tourist traffic from Gerolstein to Daun in summer. After restoring and securing the section between Ulmen and Kaisersesch, the Eifelquerbahn was again open to traffic since April 26, 2008.

In an accident on June 6, 2009 at an open level crossing near Hohenfels, a rail bus collided with a truck combination. The fully occupied train derailed and fell down an embankment. A total of 26 people were injured, 5 people were seriously injured, and the train driver and conductor were critically injured.

Reactivation plans and blocking of the infrastructure 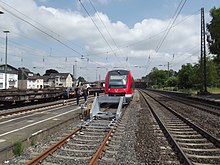 Regional train to Kaisersesch in Andernach

In 2004 the SPNV Nord saw the Kaisersesch - Ulmen section as the most promising reactivation project in its area of ​​responsibility, whereupon the financial implications of this measure were clarified. For the necessary renovation of the superstructure, signaling adjustments in Kaisersesch, upgrading of stops and level crossings, 3.9 million euros were estimated, some of which should be funded through the Municipal Transport Financing Act. The operator at the time, TransRegio, stated in exploratory talks that an increase in the customer fee by 1.1 million euros per year was necessary for the extension of the local trains to Ulmen. In contrast to the Mayen – Kaisersesch section, a trial run is not possible for this section without investment. The SPNV Nord should have given an order guarantee for 20 years immediately. Due to cuts in regionalization funds by the Koch-Steinbrück paper , the reactivation was not pursued at that time.

In the course of the preliminary planning of the 2015 Rhineland-Palatinate cycle, several options for reactivating the Kaisersesch - Gerolstein section, which is currently not served by regular local rail transport, were examined. A reactivation of subsections in this study did not make economic sense. Only the commissioning of the entire route achieved a cost-benefit factor above 1 and was therefore eligible for funding by the state. The travel time between Andernach and Gerolstein should be around two hours, and up to 1900 passengers were expected in sections. The costs were then estimated at around 20 million euros. On June 9, 2009 the SPNV Nord / Rhineland-Palatinate decided to fully reactivate the Eifelquerbahn in local passenger traffic for December 2014. The cost estimate had to be corrected to 40 million in 2011 after a revision of the cost-benefit analysis, which also included the Reactivation of the entire route no longer made economic sense.

On the basis of the new figures, the majority of the Daun district council in December 2012 was against reactivating the “Eifelquerbahn” Gerolstein – Daun – Kaisersesch. The previous operator announced shortly afterwards that he had not applied for an operating license according to § 6 AEG for 2013.

This section has been closed since January 1, 2013 because train journeys are not possible without a new construction of the Kyll Bridge near Pelm . This meant that the steam train journeys operated by the Gerolstein locomotive shed were no longer necessary.

In autumn 2016, a separate cost-benefit analysis for the disused section Kaisersesch - Gerolstein should be presented, on the basis of which the neighboring communities and districts will decide on the future of the line. The renovation costs, which are now estimated at 24 million euros (of which 6 million euros for the necessary new construction of the Pelmer Bridge), are assigned a decisive role.

The Eifelquerbahn follows the Eifel route from Gerolstein to Pelm , then branches off in a north-easterly direction and leads via Daun , Ulmen and Kaisersesch to Mayen . From there it leads in several bends to Andernach , where it joins the left Rhine stretch northwards .

The entire route is owned by DB Netz . The Ulmen – Kaisersesch section was last opened to traffic after extensive renovation in April 2008 as part of a station festival in Ulmen, but is currently not passable.

Until May 27, 2000, the local transport services on the route were operated by Deutsche Bahn. Until the takeover by trans regio multiple units of the 628 series and occasional wagon trains hauled with the 215 series during rush hour traffic were used.

Following a Europe-wide tender, the local trains on the route from May 28, 2000 to December 13, 2008 were operated by trans regio with eight regional shuttles . As of August 6, 2000, the trains were extended beyond Mayen to Kaisersesch as part of a three-year trial run, thus reactivating the local rail passenger section . After the trial operation ended, a contract was agreed to continue until the transport contract expired in December 2008.

After a second Europe-wide tender, DB Regio was able to regain the management of local trains. As part of the transport contract, rebuilt class 628.3 multiple units were used between December 14, 2008 and December 13, 2014 . To increase performance, the control cars were lined up on vehicles of the 628.2 series and two motor cars were coupled together. Due to the loss of the control car, a 1st class compartment had to be installed in some of the motor cars and the toilet had to be removed.

After a third tender by the company, the trains of the DB Regio have been running under the brand name Lahn-Eifel-Bahn since the timetable change in December 2014 . The RB 38 usually runs hourly from Kaisersesch via Mayen to Andernach, with an hourly gap between Mayen and Kaisersesch at noon. This is required for a step jump so that there are good connections with the RE 5 in Andernach in the load direction. The train crossings in Mayen Ost take place until 12 noon, four minutes before the general symmetry minute, so that there are only good connections in the direction of Koblenz and Cologne. After 2 p.m., the train crossings in Mayen Ost take place four minutes after the usual symmetry minute, so that there are only good connections from Koblenz and Cologne. Between Mayen and Andernach, the offer is supplemented by the hourly RB 23, which runs via Koblenz to Limburg an der Lahn . This means that on the section between Mayen and Andernach there is approximately every half hour in both directions, and the accessibility of Koblenz city center from the Eifelquerbahn railway stations is significantly improved. With the new transport contract, modernized vehicles from the 643 , 648 and 640 series are used.

The Volcano Eifel-Bahn (VEB) was from the year 2000 to 2014 tenants of the section of Kaisersesch to Pelm and operational through 2012 from May to October on weekends and public holidays, a two-hour intervals with rail buses , in the summer months during the week between Gerolstein and Elms. In addition, a historic train, consisting of a class 52 steam locomotive and reconditioned passenger cars, ran between Gerolstein and Ulmen on Wednesdays during the summer holidays .

At the end of 2012, the political bodies rejected investments in the rail infrastructure, so that the VEB announced that from 2013 it would no longer be able to carry out special traffic on this section of the route.

At the end of March 2013 it became known that the state of Rhineland-Palatinate had promised to provide 13 million euros for the repair of the infrastructure in order to enable tourism trips again.

At the end of October 2017, the neighboring municipalities declared that they would refuse to reactivate the out-of-service section of the route for tourist traffic only. Instead, they ask the state to upgrade the entire route for regular local rail transport in the Rhineland-Palatinate cycle and then reactivate it. For this around 40 million euros are to be invested, u. a. in the rehabilitation of the Kylltalbrücke near Pelm.

On December 19, 2017, the regional newspaper Trierischer Volksfreund reported on a letter from Andy Becht (FDP), State Secretary in the Rhineland-Palatinate Ministry of Transport, to Heinz-Peter Thiel, District Administrator of the Vulkaneifel district. There, the repair of the route for the resumption of local rail passenger transport (SPNV) is rejected by the state with reference to the high and uneconomical costs of 40 million euros. For this section, various alternatives are now being discussed, ranging from tourist traffic (investment required 24 million euros) to a trolley route and the creation of a cycle path. For the Kaisersesch – Ulmen section, the prospects for the resumption of regular traffic are better, as it was repaired a few years ago.

Brohltal-Schmalspureisenbahn Betriebs-GmbH and Eifelbahn Verkehrsgesellschaft expressed interest in a tender by DB Netz AG to take over the route . On April 16, 2019, the Eifelquerbahn e. V., whose aim is to maintain the entire route and, in the medium term, to make the Kaisersesch – Daun section passable.

As part of the planning for the Germany cycle, the SPNV Nord introduced a change in the service of the Mayen Ost - Kaisersesch section from the RB 38 Andernach - Mayen Ost to the RB 23 Kaisersesch - Limburg. In order to implement the timetable, it is necessary to set up a crossing station in Monreal.

The Eifelquerbahn between Gerolstein, Daun and Kaisersesch was used for shooting the television film Lasko - On behalf of the Vatican . There were several action scenes with the train, including the collision with the helicopter at the level crossing in Rengen .