Müllenbach in der Eifel is a municipality in the district of Cochem-Zell in Rhineland-Palatinate . It belongs to the Kaisersesch association.

In 1036, Müllenbach is said to have been mentioned for the first time as "Michelembach sup Cumitato"; the documentary mention is only certain for 1333. In 1548, Kurtrier took over the sovereign rights over Müllenbach from the Counts of Virneburg . Müllenbach belonged to the Monreal Office and the Masburg High Court . The high court Masburg was a fiefdom of the Counts of Virneburg. In the Trier fire book from 1563 there are 23 fireplaces (households) in Müllenbach (Moelenbach).

In 1794 French revolutionary troops annexed the Left Bank of the Rhine , from 1798 to 1814 Müllenbach belonged to the canton of Kaisersesch in the Koblenz arrondissement of the Rhine-Moselle department . The Munizipalrat (Müllenbacher community representative in the Mairie Kaisersesch) was the citizen Felser in 1808. There was a school teacher in town.

Due to the resolutions at the Congress of Vienna (1815), the region was assigned to the Kingdom of Prussia . Under the Prussian administration, the municipality of Müllenbach became part of the mayor's office in Kaisersesch in the Cochem district , which belonged to the new administrative district of Koblenz and, from 1822, to the Rhine province .

The municipality of Müllenbach has been part of the state of Rhineland-Palatinate since 1946 , has belonged to the Kaisersesch association since 1968 and to the Cochem-Zell district since 1969 .

The development of the population of Müllenbach, the values ​​from 1871 to 1987 are based on censuses:

The municipal council in Müllenbach consists of twelve council members, who were elected in the local elections on May 26, 2019 in a personalized proportional representation, and the honorary local mayor as chairman. The twelve seats in the municipal council are divided between two groups of voters . 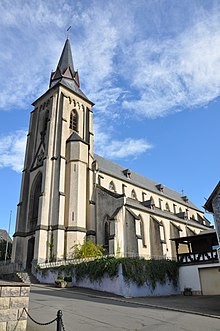