The title of this article is ambiguous. Further meanings are listed under Lütz (disambiguation) . 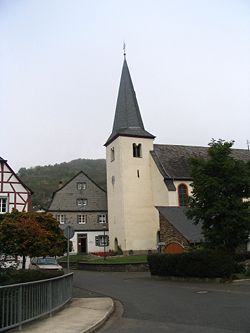 Half-timbered houses and the historic church characterize the place

The idyllic Lützbachtal with the Marienkapelle extends south of the village

Lütz is a municipality in the Cochem-Zell district in Rhineland-Palatinate . It has been a member of the Cochem community since July 1, 2014 . Lütz is a state-approved resort .

The place is located in the northern Hunsrück in a side valley of the Moselle (between the Moselle towns of Burgen and Treis-Karden) only a few kilometers from the Moselle. Lütz is located in the Lützbachtal , which is hardly accessible to traffic. The village is characterized by a number of beautiful half-timbered houses.

Lütz was first mentioned in a document in 912, when King Karl III. gave his property to "Lutiaco" to the monastery of St. Maximin .

Ecclesiastically, the parish of Lütz belonged to the land chapter of Zell of the Archdiocese of Trier , but did not belong to the territory of the Electorate of Trier . The church was first mentioned around 1250 under the name Luzze in the property register of the Archbishop of Trier. According to a visitation report from 1569, the parish “Lutz” included the branches “Dommershusen” ( Dommershausen ) with “Ibeshusen” Eveshausen , “Budershusen” (Petershausen), “Lych” ( Lieg ), “Lair” ( Lahr ) and “Sultzhusen” “( Zilshausen ). In 1806 Dommershausen and Eveshausen became an independent parish, and in 1869 the Lieg parish was spun off.

A village fire destroyed parts of the village in 1749. The church of St. Maximinus (with the exception of the Romanesque tower from the 12th century) and the town hall had to be rebuilt.

In the 14th century Lütz belonged to the Eltz rule . Lütz was owned by imperial knights and belonged to Baron von Wiltberg when the French revolutionary troops took the left bank of the Rhine in 1794 . In 1815 the place was assigned to the Kingdom of Prussia at the Congress of Vienna . Since 1946 the place has been part of the then newly formed state of Rhineland-Palatinate .

The municipal council in Lütz consists of eight council members, who were elected by a majority vote in the local elections on May 26, 2019 , and the honorary local mayor as chairman.

The Hunsrück-Moselle cycle path runs through the village. A hiking trail runs parallel to the stream through the valley. A newly created slate mine path near Lütz provides knowledge about the slate mining that was formerly operated in the Lützbachtal. Until 1953, slate was mined in what were formerly eleven pits with 19 tunnels and 5 test tunnels. The slate heaps today offer rare animal and plant species a unique biotope.