Church in the center of Altstrimmig

Altstrimmig is a municipality in the district of Cochem-Zell in Rhineland-Palatinate . It belongs to the Verbandsgemeinde Zell (Mosel) .

The place Altstrimmig was first mentioned in a document in 1357. From May 31, 1358 there was a deed of mortgage from Archbishop Boemund II for Gerhard von Ehrenberg . The Strimmiger Berg, also known as the Strimmiger Court , was part of the “Dreihherrischen Territory” until 1780. As in the Beltheim court , Kurtrier , Sponheim and Braunshorn (later Winneburg and Metternich) shared sovereignty. From 1794 Altstrimmig was under French rule. From 1798 to 1814 Altstrimmig belonged to the Mairie Beilstein in the canton of Zell , which was part of the Koblenz arrondissement in the Rhine-Mosel department . In 1815 the region and with it the place Altstrimmig was assigned to the Kingdom of Prussia based on the resolutions of the Congress of Vienna . Under the Prussian administration, the village belonged Altstrimmig 1816 mayoralty Senheim (1927-1968 Office Senheim) in the newly created district of cell in Koblenz on.

As in all of Germany, the longing to emigrate to America increased in Altstrimmig, as there was political dissatisfaction and a lack of gainful employment in the region of what is now Rhineland-Palatinate and Hesse.

On May 26, 1852, 85 people (36 people up to 14 years of age, 49 people over 14 years of age) left Altstrimmig for New York, where they went ashore on June 13, 1852. In the following years she was mainly drawn to the state of Wisconsin , where she a. a. found their new home in the towns of Green Bay , Washington County , Sheboygan , Milwaukee , Germantown , Farmington , Cedarburg and Appleton, some of which they founded .

Other emigrants - 36 people - left the place between the years 1829 and 1890 for South and North America. In South America it was the areas around Porto Alegre , Santa Cruz do Sul and San Jose. The communities that still exist today are Novo Hamburgo (German: New Hamburg), São Leopoldo and Rio Grande . 31 newspapers and over 150 associations were founded by the colonists.

The total travel costs of all emigrants in the amount of 22,015 thalers , 221 silver groschen and 46 pfennigs were borne jointly by the communities of Mittelstrimmig, Altstrimmig, Liesenich, Grenderich and Senheim, of which the community of Altstrimmig accounted for 3,156 thalers.

Altstrimmig has been part of the then newly formed state of Rhineland-Palatinate since 1946 . In 1968 the Senheim office, like all offices in the administrative districts of Koblenz and Trier, was converted into association communities . Through the 8th Administrative Simplification Act of July 18, 1970 with effect from November 7, 1970, the temporarily existing community of Senheim was dissolved and Altstrimmig was reclassified into the community of Zell (Mosel) . 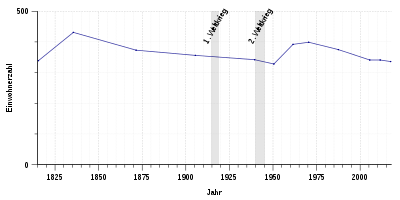 The development of the population of the municipality Altstrimmig, the values ​​from 1871 to 1987 are based on censuses:

The council in Altstrimmig consists of eight council members, who in the local elections on May 26, 2019 in a majority vote were elected, and the honorary mayor as chairman.

The so-called old mill was renovated by the local homeland and tourist association and restored to working order.

Altstrimmig has a parish hall, a fairground, a children's playground and a barbecue hut with sanitary facilities.

Altstrimmig (view from the west)