Milwaukee ( Engl. Pronunciation [ mɪlwɔːki ]) is the largest city in the US -amerikanischen State Wisconsin . In 2016 the city had 595,047 inhabitants. Milwaukee is the center of the Milwaukee metropolitan area , which is the largest metropolitan area in Wisconsin with over 1.7 million inhabitants. The name "Milwaukee" possibly comes from the Algonquin language of the Potawatomi ( minwaking ) or Ojibwe ( ominowakiing ) and means "meeting place (by the water)".

Milwaukee is located on the west bank of Lake Michigan at the confluence of three rivers: the Menomonee River , the Kinnickinnic River, and the Milwaukee River .

Extension of the Milwaukee Art Museum

First settlers in Milwaukee was in 1785 the French Canadians Alexis Laframboise, who opened a trading post there. From 1818 to 1834, Byron Kilbourn, Solomon Juneau and George H. Walker each founded their own settlements in the area, some of which led to violent clashes, such as the Milwaukee Bridge War in 1845 . With a view to ending this hostility, Milwaukee was founded on January 31, 1846 by the amalgamation of the three towns of Walker's Point, Juneautown and Kilbourntown.

The development of the city in the 19th century was shaped by the large influx of German immigrants. Especially after the failed revolution of 1848 , many disappointed and persecuted Germans were drawn to this part of the USA, which had only recently been opened for settlement. Between 1840 and 1880, Milwaukee's population increased by 70 to 80 percent every ten years. According to Samuel Freeman's The Emigrant Handbook , there were six German-language newspapers in the city in 1851. The German revolutionary and politician Carl Schurz also lived in Milwaukee for a short time. In 1890 the proportion of the German population was 69%.

One of the legacies of this generation of immigrants was the strong sense of community among the citizens of Milwaukee. The city was considered to be very progressive in social matters and was even ruled socialist over large parts of the 20th century. The establishment of a park commission in 1880, which ensured that many green areas were spared from the settlement, is attributed to the German tendency for beer garden cosiness. The lakeshore was also landscaped and made accessible to everyone. The city was also considered exemplary for its local public transport.

The major breweries Pabst , Schlitz , Stroh and Miller earned Milwaukee the reputation of the American beer capital. Larger restaurants have their own breweries, so there is a beer for almost every taste in Milwaukee.

The city's landmarks created in the 20th century include the Basilica of St. Josaphat of the Polish Settlers, the largest church in the city, and the Tripoli Shrine Temple , an orientalizing building designed by the Masonic organization Shriners based on the model of the Taj Mahal . With the extension of the art museum, which was completed in 2001 by Santiago Calatrava , Milwaukee can come up with a new architectural attraction.

Milwaukee was historically strongly influenced by German influences. Around 1880 about 27% of the inhabitants of the city population were native Germans. According to information from "visitmilwaukee.org", the traditional city festival "German Fest" still exists today.

The Mayor of Milwaukee has been the Democrat Tom Barrett since April 15, 2004 , previously a member of the United States House of Representatives . Barrett ran at the Midterm Elections in November 2010 for governor of Wisconsin, but was defeated by Republican candidate Scott Walker .

Milwaukee is twinned with the following eight cities:

Milwaukee River in Milwaukee just before it flows into Lake Michigan

That the Milwaukee School of Engineering belonging Grohmann Museum is the largest dedicated to the topic of work museum in the world. 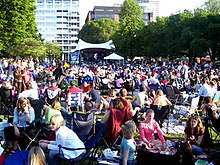 Jazz in the Park

Once a year, from the last Thursday in June to the first Sunday after July 4th, Milwaukee hosts the world's largest music festival with the eleven-day Summerfest . Free concerts can also be enjoyed throughout Milwaukee during the summer. One of the nicest annual free concerts is 'Jazz in the Park' in Cathedral Square Park. Cathedral Square Park then becomes a picnic with jazz. There are also a number of other festivals and celebrations that celebrate the cultural heritage of the respective immigrant and indigenous people. The festival season starts at the beginning of June with the Riversplash and continues with the PrideFest (festival of the LGBT community), Polish Fest, Festa Italiana, German Fest, African World Festival, Arab World Fest, Irish Fest, Mexican Fiesta, and Indian Summer. Asian Moon was also part of the festival season but has not been happening since 2005 and it's unclear if it will happen again at all.

The metropolitan area of ​​Milwaukee generated a gross domestic product of 100.9 billion US dollars in 2016, making it 38th among the metropolitan areas of the United States. The unemployment rate in the metropolitan region was 2.8 percent and was thus below the national average of 3.8 percent (as of March 2018). The personal per capita income in 2016 was 51,444 US dollars, which means that Milwaukee has a slightly above average income level. 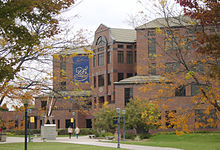 There are several universities, u. a. the MSOE and the UWM ( University of Wisconsin – Milwaukee ), and Marquette University .

Services are the fastest growing segments of Milwaukee's economy, with health and care alone accounting for 27% of the city's jobs. In 2009 Fortune magazine selected five Milwaukee-based companies as the world's most-admired companies in their industries: two companies ranked second in their field, Manpower Inc. for temping agencies and Northwestern Mutual for life - and health insurance. Johnson Controls Inc. was ranked fourth among automotive suppliers. Fiserv Inc., in financial data services, and Kohls Corp., in retail, took fifth place.