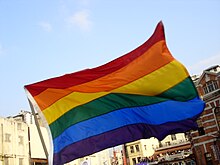 One of the main symbols of the LGBT community is the rainbow flag ( Taipei , Taiwan 2004) 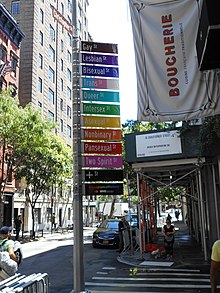 LGBT is an abbreviation for L esbian, G ay, B isexual and T ransgender ( lesbian , gay , bisexual , transgender ) adopted from the English-speaking world . Initially, the LGB came up in English as an association of people with the corresponding sexual orientations in the fight against discrimination (compare sexism ). This collective movement soon joined groups of T ransgender-persons who are not with them identified assigned sex at birth. Since the classification of the sexual orientation changes with a change in gender assignment, the LGB movement called for the freedom to live out one's own sexuality, going beyond homosexuality . The abbreviation was supplemented by the "T".

With the advent of queer theory , queer people joined the collective movement (LGBTQ). Below the name was supplemented with "I" for i ntersexuelle people, then "A" for a sexual person and finally with an opening "+" - sign for other gender identities ( LGBTQIA + ). All subgroups demand freedom with regard to the socially shaped bisexual gender order and the associated social norm of heteronormativity (opposite-sex love). From the turn of the millennium, these abbreviations were so widespread that they were used worldwide by many groups and their media and thus became internationalism . In the meantime, LGBT has established itself as the short form for all genders , gender identities and sexual orientations that deviate from bisexual and heterosexual norms. The United Nations Commission on Human Rights uses the short form LGBT in their campaign "UN Free & Equal".

→ Main article : History of the LGBT

Until after the Second World War, the term third gender was used as a collective term for people who deviate from heteronormative rules. Beginning with Magnus Hirschfeld and especially from the end of the 1940s, science increasingly differentiated between homosexuality and transsexuality, and the term third gender was abandoned. In the 1940s to the early 1970s in particular, some used the term homophile as a self-description that was intended to emphasize love instead of the medical-sounding word homosexual, which could easily lead to misunderstandings due to the overemphasis on sex and which was highly negatively affected . It was often more conservative people who also approved of a very strong adjustment to the heterosexual majority society. From Stonewall 1969 in particular , more progressive people used the terms gay or gay, which have now become geuse words .

The stronger cooperation between the gay and lesbian movement , which is also closely linked to the women's movement , led to the demand for an identity of its own, and the words “gays and lesbians” , “gay and lesbian” or “gay” became more and more popular and lesbian ”is used to make it clear that lesbian issues are also included. Often the women were given precedence in the name, among other things because they are less often noticed. In everyday use in the scene is often "schwu ll esbisch" or "gaylesbian" used.

In the 1970s the bi movement began to emancipate itself. She demanded to be viewed as an independent group, but wanted to partially work with the already established associations. Due to the prevailing heteronormativity, bisexuals were often viewed as gays and lesbians. On the other hand, there were differences, as some lesbians and gays were reluctant to accept bisexuals as such and accused them of cowardice before coming out and sometimes even of betraying the movement. In addition, in the late 1970s and early 1980s, the first euphoria after Stonewall had dissipated and AIDS entered the stage of contemporary history. Also triggered by the latter, the terms “gay, lesbian and bisexual” or “gays, lesbian and bisexual” were increasingly used in the late 1980s . Because of the tedium of listing all groups, the abbreviation “GLB” or “LGB” was used more and more often in the English-speaking world . In the German-speaking area, the abbreviation “LSB” was only able to establish itself to a limited extent and even less so “SLB” . Here we went more to play with existing words, and often by CamelCase clarified acronyms as especially "lesbian, gay" and or "schwu L esBisch" to use. The newsgroup "de.alt.soc.lesbischwul" also got its name from this. The English counterpart LesBiGay also includes the play on words "Let's be gay!"

There is no direct connection to transgender people as this is not a sexual orientation . The connection arises historically from the third sex and from socially effective heterosexism, which affects both. Among other things, the dissemination of ideas from queer theory and gender research in other cultures and times led to the communities of fate coming closer again. It was not until the 1990s that it became common to speak of “gay, lesbian, bisexual and transgender people” or “gays, lesbians, bisexual and transgender people” . Since the frequent listing of all those affected by the sexual minorities is always very lengthy and space-consuming, the extended acronym "LGBT" or, more rarely, "GLBT" became common in the mid-1990s and has spread quite quickly to today's frequent use by associations and organizations. especially in English-speaking countries, but also in German-speaking countries and in many other countries. This designation has even caught on in France, which is otherwise very linguistic. The German-speaking counterparts “LSBT” or “SLBT” are less common. Language- specific acronyms, on the other hand, are in Esperanto ( GLAT ), Hungarian ( LMBT ), Norwegian ( LHBT ), Swedish ( HBT ), Scottish Gaelic ( LCDT ) and Hebrew (להט״ב, "lahatab", l h t b ). There are variants adapted to the script in Cyrillic ( ЛГБТ ).

More and more often is Queer (dt. Or "strange", "weird") is used as a synonym, especially in names because it is an anglicized, not a made-up word and only one term. In principle, this is understood to mean anything that deviates from heteronormativity . Since it has become a buzzword, there are often only partial areas behind it, especially when it comes to commercial use of the name - in contrast to "queer studies" university institutes and the like.

The top-level domain has also been available on the Internet since July 2014 .lgbt.

In 2016, an online survey of almost 12,000 people in the European Union came to the result that 7.4% of the population in Germany belong to the LGBT spectrum. In the nine European countries with statistically significant results, Germany took the top spot, ahead of Spain (6.9%) and England (6.5%). At 1.5%, very few people in Hungary belong to the LGBT community.

Some transgender people criticize that they are co-opted by the frequent use of LGBT as a synonym for lesbian-gay (which creates a non-existent context), because transgender people can also have a heterosexual orientation . Other transgender people, however, argue in favor of LGBT people because they see themselves as a marginalized part of a common movement or scene. Often times, the term is used automatically, even if it is only about gay and lesbian issues. As a result, there is a demand to separate the “T” from “LGB” again, since gender identity is a fundamentally different topic from sexual orientation.

On the other hand, some lesbian feminists criticize the term "LGBT" because lesbians are marginalized in the alleged LGBT movement, in which it also sexism and misogyny give. For example, at the Pride Parade in London in 2018, a group called for the "L" to be removed from "LGBT". They criticized the fact that “LGBT” organizations and events were dominated by men who disregarded the interests of lesbians. There is also a conflict over the question of whether biological gender should play a role in sexual identity and orientation. For example, some lesbians prefer only women in the biological sense as sexual partners and reject the view that there can also be “lesbians with a penis”, which representatives of the LGBT movement accuse them of transphobia .

Indicators on the LGBT situation

At the end of 2019, the conservative London think tank Legatum Institute published two social indicators on the situation of LGBT people in 167 countries as part of their annual prosperity indicator Legatum Prosperity Index (PI):

Of the three LGBT rights, 55 countries have none, only 26 have all, 12 have two, 74 only one: they legally recognize homosexuality ( de jure ) , but not always in practical life (de facto) .

These two items are among the total of 27 indicators of the " Personal Freedom " (Personal Freedom) , one of the 12 sub- indices of the Prosperity Index and part of the area " between including companies" (Inclusive Societies) .

The following short list shows the three DA-CH countries in comparison to others that occupy first place, together with changes from 2009 (see list of 167 countries ), the sub-index on personal freedom ( list of countries ) and the overall result of the PI ( Country list ):

The acronym “SGL” (same gender loving) was created by an Afro-American activist in order to distinguish itself from the white-dominated LGBT community.

The abbreviation "GSD" ( Gender and sexual diversity ) was proposed by Dominic Davies and Pamela Gawler-Wright as an alternative to LGBT. The abbreviation LGBT would not include many related groups. Instead of expanding the abbreviation with LGBTTIQ, for example, they propose a short but more comprehensive description with "GSD" that is also taken up by the queer community.