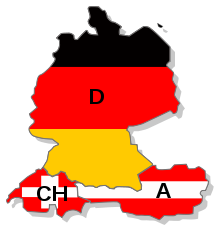 DA-CH or DACH is an artificial word or an apronym for Germany , Austria and Switzerland - and thus for the largest part of the linguistic and economic area in which standard German is the umbrella language . The small states of Liechtenstein and / or Luxembourg or the German-speaking minorities in Italy , Belgium and / or Denmark are often included.

It is formed from the national symbols of the three countries:

In this ranking, the countries appear rather randomly according to their size - be it area or population.

The abbreviation GSA is used for the English-language equivalent of Germany, Switzerland, Austria .

The word is used, for example, as a title for events such as conferences ("DA-CH-Tagung"), for joint projects between these three countries, in company organizations (sales structure) and for maps for navigation devices that cover the area of ​​these countries.