The section of the Rhine between Lake Constance and Basel is known as the Upper Rhine . This section largely forms the border between Germany and Switzerland . The Hochrhein-Bodensee planning region of the state of Baden-Württemberg is named after him.

The name Hochrhein was only introduced by science in the 19th century. Above all, the geologists endeavored to linguistically separate the Upper Rhine from the Upper Rhine. Before that one spoke at most of the "Baden-Swiss Rhine". The Upper Rhine begins at the outflow of the Rhine from the Untersee of Lake Constance near Stein am Rhein and merges into the Upper Rhine at the Basel Rhine knee . More accurate boundary point between the sub-basin Rheinsee the lower lake and the high Rhein is the Rhine bridge Stein am Rhein , defined as the endpoint applies Middle Bridge in Basel. The former is at river kilometer 25.45, the latter at kilometer 166.6; in between there are a good 141 kilometers of electricity.

In contrast to the Alpine Rhine and Upper Rhine , the Upper Rhine flows mainly to the west, falling from 395 m to 252 m. The flow rate increases from 364 m³ / s to 1037 m³ / s (for further data see : river system of the Rhine ). The valley is alternately broad-soled and narrowly indented . This is one of the reasons why the population density varies .

Larger tributaries of the High Rhine are Biber , Durach , Thur , Töss , Glatt , Wutach , Aare , Alb , Murg , Sissle , Wehra , Ergolz and Birs . It is noteworthy that at the confluence of the Aare in Koblenz (CH) it has more water (518 m³ / s) than the somewhat longer Rhine with 473 m³ / s. From a hydrological point of view, the Rhine is a tributary of the Aare. 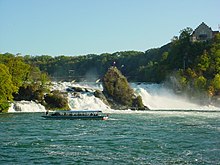 The Rhine Falls near Neuhausen

The former Laufenburg rapids (painting by Gustav Schönleber around 1880)

The relatively high gradient and the changes in course caused by the cold period facilitated the formation of several significant rapids ("running") on the Upper Rhine. First of all, the Upper Rhine in Neuhausen forms the largest waterfall in continental Europe when it meets a previously buried river channel , the Rhine Falls ( Großer Laufen ; Upper Jura ). It follows the Ettikoner Lauffen , also called Koblenzer Laufen (Upper Muschelkalk ) , above the Wutach estuary . At Laufenburg , the post-glacial deepening Rhine missed a previously sedimented drainage channel and met a branch of the Black Forest Crystalline. In it he cut the narrow Laufenburg rapids, the now blown up and overflowed Little Laufen . The Schwörstadter Laufen is also overflowing today . There is a shoal at Stein Castle near Rheinfelden , the St. Anna-Loch .

Well-known places and cities on the Upper Rhine (downstream) are ...

High Rhine between Stein and Basel

The character of the river landscape was changed by the construction of hydropower plants over long distances. In connection with the original goal of making navigable, the big rapids near Laufenburg were blown up and dammed. See also → List of waterfalls in Germany .

The Upper Rhine still flows undamped between Stein am Rhein and Diessenhofen . The first river power plant of the High Rhine in Schaffhausen has its dam above Diessenhofen. The Rheinau diversion power plant follows around 7 km below the Rhine Falls . Its construction was preceded by violent protests in the 1950s, as the damming effect is visible up to the Rhine Falls. In addition, the Rhine loop at Rheinau Abbey is only bathed in water thanks to two auxiliary weirs. The next power plant is near Eglisau-Glattfelden . Its construction and the associated damming of the river made it necessary to demolish numerous houses and build the new Eglisau bridge over the Rhine between 1915 and 1920 . In the Oberriet district of Eglisau alone , for example, 15 of a total of 17 buildings had to be demolished. The Reckingen power plant follows about ten kilometers down the Rhine , after which the river flows back through the Koblenzer Laufen, after which the Aare takes in and meets the Albbruck-Dogern power plant at Leibstadt and Dogern . A further seven power plants will follow from here to Basel . The Upper Rhine has a total of eleven barrages with twelve river power plants (two at the Augst / Wyhlen barrage ).

There are a total of 11 barrages on the Upper Rhine.

The Hochrhein rafting was historically significant .

The green and white navigation signs , the so-called Wiffen, are typical of the Upper Rhine . They mark the fairway . Ships with a greater draft, such as the scheduled ships of the Swiss shipping company Untersee and Rhein, can only sail on the green side. To be on the safe side, boats with little draft, such as B. Weidlinge or rubber dinghies , kept driving on the white side. In Basel there is the Basler Personenschifffahrt . Large inland vessels can navigate the Upper Rhine from the Rhine port of Rheinfelden, both downstream and upstream. The Rhine port of Weil am Rhein is important for the economy and the Swiss Rhine ports for Switzerland .

See also → List of landing stages on the Upper Rhine