The name "Jura" was introduced into scientific literature by Alexander von Humboldt in 1795 for rock layers in the Jura Mountains , and in 1829 Alexandre Brongniart expanded it to include the current system name. The Jura consists mainly of the deposits ( sediment ) during the system on the edge of the former of the Jura Tethys have been deposited.

The beginning of the Jurassic is defined by the first appearance of the ammonite species Psiloceras spelae . A final definition of the GSSP (corresponds roughly to a type profile and a type locality ) took place in 2010 at the Kuhjoch in the Karwendel in Tyrol near the border with Bavaria . The upper limit of the Jura or the lower limit of the Chalk (and thus that of the Berriasium level) has not yet been conclusively defined. It is expected to be placed near the first appearance of the ammonite species Berriasella jacobi .

Subdivision of the Jura 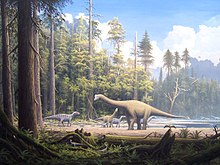 A scene from the Upper Jura of Northern Germany. The sauropods in the center of the picture belong to the species Europäischeaurus holgeri . In the foreground two Compsognathus can be seen, in the background a herd of Iguanodont animals passes by.

As can be seen in the info box, the Jura system is divided into three series and a total of eleven levels .

The most important key fossils in the Jurassic are the ammonites . These distant relatives of today's octopus , which occur exclusively in the marine environment, were almost extinct by the end of the Triassic. A significant number of new genera developed again during the hettangium, making them one of the most common invertebrates of this time. You can find them e.g. B. in southern Germany in the Posidonia schist and in limestone banks of the Swabian Alb, the Franconian Alb and in the Alps together with the belemnites to be placed with the squids .

In the early Jurassic, the supercontinent Pangea continued to disintegrate ; this process had already started in the Upper Triassic with the formation of rift fracture systems. Pangea was divided into Laurasia (North America, Europe) and the southern continent of Gondwana . The early Atlantic and Tethys Sea were still narrow. In the course of the Jura, Gondwana also began to break apart. This resulted, with a main phase in the Middle Jurassic, in the formation of several volcanic centers of activity in the area of ​​South Africa and Proto-Antarctica in the form of the Karoo-Ferrar magma outflows, associated with a greatly increased ocean floor spread rate . 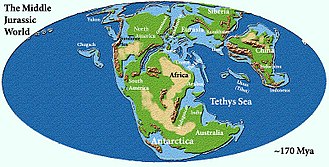 Arrangement of the continents in the Middle Jura

In the geoscientific literature, the Jura has long been described as a relatively calm, uneventful and climatically stable epoch. This assessment has changed fundamentally in the last few decades. According to this, the middle section of the Mesozoic Era was a time of extensive tectonic processes, marked sea level fluctuations and rapid warming and cooling phases with a duration of 0.5 to 1.0 million years each. For the chronostratigraphic levels callovium (166.1 to 163.5 mya) and oxfordium (163.5 to 157.3 mya), several studies, after evaluating a series of proxy data, determine a significant cooling, the decrease in carbon dioxide concentration from 700 ppm below 500/400 ppm and a related glaciation of the polar regions of the northern hemisphere. Other publications assume a moderate cooling and assess the existence of larger ice caps as unlikely. An important indicator for the occurrence of icing processes in the Jura are the pronounced rise and fall of the sea level, which, due to their very rapid succession, exclude tectonically induced changes in the ocean basin volume in many cases. A comprehensive analysis of the oceanic trends comes to the conclusion that the significant sea level fluctuations (mainly in the range of 25 to 75 meters) can hardly be explained without the temporary existence of large ice sheets. 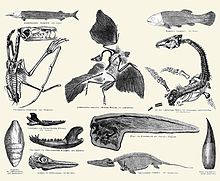 The Jura represents the first heyday of the dinosaurs . In Central Europe footprints ( Barkhausen , Münchehagen ) and skeletal remains of dinosaurs from the Jurassic period ( Ohmdenosaurus , Compsognathus ) have been discovered. The only cat-sized Compsognathus von Jachenhausen near Riedenburg was long considered the smallest dinosaur.

The "primeval bird" Archeopteryx was found in the rock layers of the Upper Jura (Malm), so far only in the Franconian Alb , especially near Solnhofen and Eichstätt .

The discovery of a mammal fossil, Hadrocodium wui , which is considered the oldest mammal in the narrower sense, also comes from the Lower Jurassic of China . More recent finds from the Middle Jurassic in northeast China's Jiulongshan Mountains ( Inner Mongolia Autonomous Region , Ningcheng District , Daohugou ) have permanently changed previous ideas about the mammalian world of the Mesozoic Era. The genus Castorocauda lutrasimilis ( Docodonta ), which lived 164 million years ago in the Middle Jurassic, resembled a beaver and already shows the further development of mammals.

Famous "fossil structures" from the Jura of Germany are the sponge stump reefs of the Swabian Alb. Small-scale reef formations also existed in northern Germany.

The flora was dominated by the gymnosperms (including the coniferous plants such as sequoias and pines , but also ginkgo trees and cycads ). The Jura is also known as the age of the cycads (cycads), as these were very common. Ferns and horsetail formed the undergrowth of the forests .

The Jurassic Period in Central Europe

At the beginning of the Jura, the sea, coming from the north, initially transgressed in a relatively narrow area of ​​northern and western Germany to southern Germany. Continental deposits were sedimented in north-eastern and eastern Germany . In the Central Jurassic, the sea then expanded further east. Almost the entire Eastern European platform was flooded. Large parts of Scandinavia and parts of Bohemia and the Rhenish Island remained mainland for almost the entire Jura. The Bohemian Island and the Rhenish Mass became one island during a regression in the Upper Central Jura, separating the North German and South German Jura. At the end of the Jura, southern Germany largely silted up, while northern Germany continued to have marine or brackish deposit conditions.

A well-known site for fossils of the Lower Jurassic from the Posidonia schist formation (e.g. ichthyosaurs , plesiosaurs , crocodiles , fish, sea ​​lilies , ammonites ) is Holzmaden near Kirchheim , at the foot of the Swabian Alb . The Urwelt-Museum Hauff located there has world renown.

The English name for the Jura - Jurassic - became known to a wide audience through the film Jurassic Park and its successors. However, many of the dinosaurs depicted in the film, including Tyrannosaurus rex and Velociraptor , date from the Cretaceous period .