The belemnites (Belemnoidea) are a diverse large group of fossil cephalopods (Cephalopoda). They existed from the Lower Carboniferous ( Mississippian ) to the end of the Cretaceous Period , i.e. from about 358 to 66 million years ago. Their preferred fossil-based skeletal elements, the rusts , are also called "thunderbolts" or "devil's fingers".

The belemnites looked similar to today's squids , had 10 tentacles and an ink bag, but had hooks rather than suction cups on the tentacles. Belemnites probably evolved from the Bactrites like the ammonites . They were so widespread in the Mesozoic that some of them are used today as reference fossils . The "belemnite animals" of the various forms are probably largely similar to one another. Belemnites probably lived nectically in shoals in the coastal area of ​​the seas near the water surface.

The inner skeleton of the "belemnite animals" is mostly divided, from anatomical front to back, into Proostracum, Phragmocon and Rostrum . From an evolutionary point of view, the Proostracum is the rest of the living chamber. In the case of the basal belemnites it is still almost closed, in the younger groups it is reduced to a long, tongue-like or even rod-like structure. While the Proostracum perhaps still had a protective function in the oldest groups (Aulacocerida), this has been reduced to a support function in the younger groups. The phragmocone (also the phragmocone) is the cone-shaped, chambered buoyancy body that is gas-filled during lifetime, as it also occurs in principle, albeit relatively larger, in the more original, outer-shelled cephalopods. The ventricular partitions (septa) are mostly transverse to the longitudinal axis of the phragmocone, but can also be clearly inclined to the longitudinal axis (e.g. in the diplobelids). The rostrum, a conical, but often elongated, cylindrical - streamlined , massive skeletal element sits on the tip of the phragmocone. It served as a counterweight to the float to enable the "belemnite animal" to swim horizontally. The rusts of the Aulacoceriden originally consist, like Phragmocon and Proostracum, of aragonite , a modification of calcium carbonate ("carbonate of lime") and organic substances that is chemically less stable in geological periods . Phragmoteuthids and Diplobelids either had very small, thin-walled aragonitic rusts or no rusts at all. In contrast, the belemnitides had rusts made of calcite , the chemically more stable modification of calcium carbonate. This has a serious impact on the fossil record . While the first three groups mentioned have a relatively low fossilization potential due to the easier solubility of the aragonite and are therefore rarely passed on, the calcitic rusts of the belemnitides are easy to preserve and can be found extremely frequently. The belemnitides therefore make up the majority of the fossil known belemnite species, are also considered to be belemnites in the actual sense (“ sensu stricto ”) and their rusts are commonly referred to as thunderbolts . 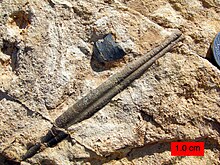 At the beginning of 2008, geologists from the State Museum of Natural History in Stuttgart found the best-preserved jaw apparatus of a belemnite in the Nusplinger Plattenkalk in the Swabian Alb . The 150 million year old fossil is believed to be a female.

The oblong shape gave the belemnite fossils their name ( Greek βέλεμνον bélemnon , lightning, bullet '), as well as the German names " Donnerkeil " or "Teufelsfinger". Thunderbolts have long been used in various cultures as a remedy for a variety of diseases, especially against lumbago , and were worn as amulets on the body or used as medicine when ground.

Because of their resemblance to projectiles, the mass occurrence of belemnites was initially mistaken for the remains of battlefields in centuries past. The term Belemnite battlefield is still used by some authors to refer to such mass occurrences.

Lynx stone is apparently another name for the belemnite and similar forms, which was used particularly, but not exclusively, when used as a medicinal product. As a lynx stone , lap stone , arrow stone or belemnite , described in a lexicon for merchants from 1852, the fossilization of a shellfish was called, which was used in superstition of medicine as a remedy for various diseases (Latin names: Lapis lyncis , Dactylus idaeos or marinus , Lyncurios , Lapis phrygius or Belmnitos ). That is why it was often sold in pharmacies at the time. In addition, the amber was occasionally referred to as the lynx stone.

Chalk and other stone formations often contain lynx stones, and they are often found in the fields. A lynx stone is usually "finger-length, but also longer, thin, smooth, straight, pointed and smells scraped like sulfur balsam". This seems to correspond to the smell of urine , which is why the stone was used as a diuretic. It was also referred to as a cow stone because it was believed that it would help when the cows did not produce milk.

In a work from 1582 it was assumed that a lynx stone comes from the urine ("urine or bruntz") of a lynx . The effect of this stone was described there as even more miraculous: “The stone Lyncurius [...], thrown on glowing kolen, extinguishes them and is not consumed by them. But not only has this miracle in itself, but also where someone throws this stone wrapped in a handkerchief into mottled kolen, then not only remains the same, but also the handkerchief unharmed. He is also useful and helpful to pregnant women during the time when they give birth to Epiphany . "

In a work on mining published in 1778, the Luchsstein, Luxstein , Karwinzelstein or Alpschoß was described as a conical or cylindrical , mostly brown stone, some of which have a conical cave (alveolum) at the thicker end where they broke off is filled with another type of stone or with earth. If you smash them, a radiant structure emerges, the rays run from the center of the stone outwards. If you dissect it in fire, it turns out that they come from a "sea animal, or worms, called holothuria" ( sea ​​cucumbers ). It is also mentioned that the ancients imagined lynx stones arose from the coagulation of the lynx urine. When he was big some called him Ceraunites , he was black Coracias and Dactylus idaeus because he was found on Mount Ida on the island of Crete . He points out that the lynx stone is not the psiloritis mentioned by the ancients (Psiloritis is also another name of the Ida Mountains), as Joh. Jacob Flick wrote a year later (1778), who named it classified the semi-precious stones and apparently mixed up the description of two types of stone.

Johann Jacob Scheuchzer described various lynx stones ( Belemnites ) found in Switzerland and Germany, some of which were in his Museo Diluviano (today in the Paleontological Museum of Zurich ) in a separate chapter in his "Natur-Historie des Schweizerlandes" . A selection: 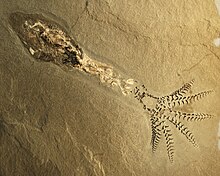 Since the rostrum was the most heavily mineralized part of the belemnite's body, it is often the only thing that has survived as a fossil ; More complete finds in which soft tissues (mostly remains of the mantle muscles, more rarely the ink pouch ) were preserved, are rare. For a long time it was therefore unclear which group of organisms these fossils belonged to. The type of belemnite can be determined on the basis of the size and shape of the rusts and especially the alveoli. Growth layers, similar to the annual rings of trees, show that belemnites lived to be around 4 years old.