The Franconian Jura , also Frankenalb , Franconian Jura or Frankenjura called, is one to 656.4  m above sea level. NHN , in the outlying foothills ( Hesselberg ) even up to 689.4  m high low mountain range , which belongs to the south-west German layer level country in Bavaria and extends the even higher Swabian Alb beyond the Nördlinger Ries to the east-northeast and finally to the north-northwest. It is 7053.8 km² in size.

On the edge of the Franconian Alb are the places Ingolstadt (south), Regensburg (south-east), Nuremberg (west of the north-east), Bamberg (north-west) and Bayreuth (north-east).

The name Alb was previously derived from the Latin expression montes albi (white mountains). More likely it is an old Celtic name and means mountain pasture .

The Franconian Jura stretches in north-south-west direction from Lichtenfels on Main past Bamberg and Nuremberg in the west and Bayreuth and Regensburg in the east and Ingolstadt on the Danube in the south to the eastern edge of the Wörnitz carrying meteorite crater Ries , through which they of the west adjoining Swabian Alb is separated. Its highest point is the 656  m high Dürrenberg on the Hahnenkamm in the extreme northwest of the southern part.

The Federal Institute for Regional Studies has since the 1950s in the Handbook of the Natural Region Divisions of Germany and in subsequent single sheets 1: 200,000 in Germany natural space divided part landscapes. The Franconian Alb, together with the Swabian Alb , which continues to the southwest , forms a third-order large region of the south-west German level region (second-order greater region). As with the Gäuen (Muschelkalk, 12-13) and Keuper-Lias countries (10-11), the Jura and Dogger-Malm landscapes were divided into a Swabian (09) and a Franconian (08) main unit group The dividing line is based more on physical than cultural considerations. Especially in the Swabian and Franconian Alb, the dividing line south of the Nördlinger Ries corresponds to the common division. 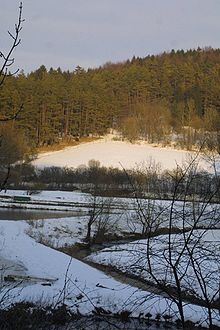 Its north extends close to the Red Main or the Main between Bayreuth in the east, Lichtenfels in the north and Bamberg in the west, its southern west is flanked from Bamberg by the Regnitz , which, however, extends upstream to Nuremberg by up to 20 km from the Alb away.

The southern border to the Middle Franconian Alb roughly follows the federal highway 14 between Hersbruck and Sulzbach-Rosenberg , but deviates slightly to the north from this line in the east via Etzelwang and Neukirchen . It follows the river valleys of Pegnitz and Etzelbach , in the far east that of the Rosenbach .

To the east, the Northern Franconian Alb is flanked by the Vils about eight kilometers away .

Franconian Switzerland, named after its typical rock formations, is located in the center of the Northern Franconian Jura . South of this is the Dolomite Kuppenalb , while the south-west belonging to Middle Franconia is referred to as Hersbrucker Schweiz and is part of the Hersbrucker Alb , which is not a natural unit and continues in the north-west of the Middle Franconian Alb . In the south-east of the landscape between Pegnitz (N), Auerbach (O) and the A 9 (W) is the 107 km² large Veldenstein Forest, which is free from communes and almost entirely covered with coniferous forest .

The north-west near Bamberg belonged to the tertiary volcanic field of the Heldburg gang , which, however, is not visible in surface forms.

The Northern Franconian Alb is almost congruent with the 2346 square kilometer Franconian Switzerland-Veldenstein Forest Nature Park , which is located in the districts of Bamberg , Bayreuth , Forchheim , Kulmbach , Lichtenfels , Neustadt an der Waldnaab , Amberg-Sulzbach and Nürnberger Land .

The Franconian Alb is increasingly used as a location for wind turbines , as here near Berching

Its northern border with the Northern Franconian Alb runs east of the Pegnitz River between Hersbruck and Sulzbach-Rosenberg ( see above ), to the west it is flanked by the Schwarzach and south of Neumarkt by the Ludwig-Danube-Main Canal .

Between Parsberg and Regensburg , the southwest border to the southern Franconian Alb follows roughly the Schwarzen Laber .

On the eastern edge are Amberg in the north and Schwandorf in the middle.

The north-west, which is still in the central Franconian district of Nürnberger Land , is largely counted as part of the Hersbrucker Alb , which, however, does not represent a natural spatial unit and continues north into the Northern Franconian Alb . The term Oberpfälzer Jura is also not limited to the Middle Franconian Jura and is also used for the south-east of the northern part. Both landscape names dive u. a. in the naming of nature reserves.

The east of the landscape is occupied by the Vilsplatten , which the Vils cuts south of Amberg .

The 3126 square kilometer Southern Frankenalb is the southernmost part of the Franconian Jura. It continues the Swabian Alb east of the Nördlinger Ries in its east-northeast direction to about Regensburg . With Upper Palatinate (northeast), Lower Bavaria (southeast), Upper Bavaria (central south), Swabia (southwest) and Middle Franconia (western and central north), five of the seven Bavarian administrative districts have a share in the southern Franconian Alb .

The southern Franconian Alb is essentially identical to the 2962.4 square kilometer Altmühltal Nature Park , which is located in the districts of Donau-Ries , Eichstätt , Kelheim , Neuburg-Schrobenhausen , Neumarkt in der Oberpfalz , Regensburg , Roth and Weißenburg-Gunzenhausen . However, the nature park crosses the borders of the Alb in the north-west, while in the east it does not quite reach the edge.

The landscape is cut in a west-east direction by the Altmühltal between Treuchtlingen and Kelheim , which is one of the valleys of the original Danube .

The two westernmost spurs of the eaves in the north of the landscape are called Hahnenkamm (between Wörnitz and Altmühl ) and Weißenburger Alb (between Altmühl and Schwarzach ).

The common landscape names of the Franconian Alb only partially designate natural spatial sub-units; many are more based on historical and tourist names.

The landscapes of the Franconian Alb, which are better known by name, include from north to southwest (larger protected areas may be listed as sub-items):

Nature parks in the Franconian Alb are:

The mountains of the Franconian Alb and their most important witness mountains include - sorted by height in meters (m) above sea ​​level :

Abbreviations used in the table below illustrates.

→ Main article : List of mountains and elevations in the Franconian Alb

Abbreviations in the table stand for:

The districts of Amberg-Sulzbach, Neumarkt in der Oberpfalz, Regensburg (western part) and Kelheim are marketed by Tourismusmarketing Ostbayern GmbH under the art term Bavarian Jura .

The Franconian Alb is the geological continuation of the Swiss Jura and the Swabian Alb to the east.

During the entire Jurassic period , about 161 to 150 million years ago, the whole of southern Germany was in the area of ​​a shallow sea, when, due to the constant subsidence of the earth's crust, massive rock sequences were deposited on the sea floor. The Jura sediments still form the largest part of the rock, mainly limestone , and are the basic material of the Franconian Alb.

The sea retreated due to uplifts of the European continental plate towards the end of the Upper Jurassic and larger areas became mainland at the beginning of the following Cretaceous period. During this time there was a tropical climate and intensive weathering of the limestone and dolomite rocks that had previously formed.

In the time of the Upper Cretaceous a sea again advanced into the area of ​​the Franconian Alb.

In the Tertiary , the sea receded again due to regional uplift and the Jura landscape was partially exposed.

The Franconian Alb is rich in beautiful rocks , caves , sinkholes , karst springs and stone channels . It is traversed by some deeply cut rivers and streams and by dry valleys. The dry grass slopes of the southern Alb are a special biological feature .

See also : List of caves in the Franconian Alb