Auerbach in the Upper Palatinate 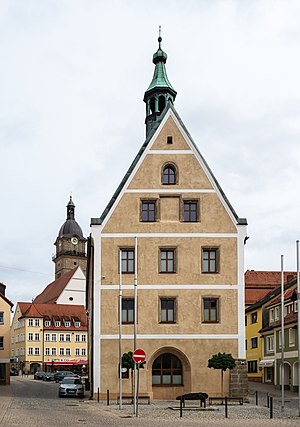 Auerbach in der Oberpfalz (officially: Auerbach idOPf. ) Is a town in the Upper Palatinate district of Amberg-Sulzbach , about 45 kilometers northeast of Nuremberg . For centuries (until 1987) high-quality iron ore was mined in and around the city .

The city lies on several small streams , including the branched Speckbach. In the urban area, these flow into the large town pond, which is followed by the small town pond. The federal highway 85 cuts through the city from northwest to southeast .

A monastery complex in the beginning of the 12th century

In 1119, Bishop Otto the Saint of Bamberg founded the Benedictine monastery Michelfeld a good three kilometers northwest of the small village Urbach . When the hustle and bustle of the merchants, traders and craftsmen around the monastery became too great, its abbot Adalbert asked Bamberg's bishop Egilbert to move the market to Urbach; that was done in 1144. Shortly afterwards Urbach received the market rights of the nearby Hopfenohe (approx. 5 km eastwards in today's Grafenwöhr military training area) and in the following years developed into a center for the whole area.

Between the 14th and 17th centuries

Auerbach was made a town in 1314 by Emperor Ludwig the Bavarian . Emperor Charles IV made the town the capital of New Bohemia in 1373, his son and successor King Wenceslaus set up his own minting workshop around 1390. From 1373 Auerbach was the seat of a regional court, which existed with a short interruption (1804-1841) until 1862 and then continued as a district court until 1973. In October 1380 the papal legate , Cardinal Pietro Pileo di Prata, visited the city.

On September 23, 1400, King Ruprecht's troops of the Palatinate captured the city ​​of Auerbach, which from then on belonged to the Upper Palatinate ; their suffix OPf. stems from this.

Auerbach was badly destroyed during the Hussite procession in early 1430. A local story reports, in the year 1430 “… a really bad wind came from Bohemia, and a time of horror and devastation broke in. The believing Hussites crossed ... the Palatinate with fire and sword and marked each of their barbaric steps with the wildest fury and branded everything with the most exuberant destruction. Their path was destruction, flame, blood, robbery, and lamentation, one after the other. Like unexpected downpours, the rabble rushed up in a hurry. Already there was almost no place left that was not shaken by the blow of devastation. ... The number of frenzied heretics, howling like wolves, was enormous and cruel, was so numerous around the monastery in the neighboring towns that they covered the surface of the earth like teeming locusts. ”(Johannes Neubig: Auerbach, the former circle - and district court town in the Upper Palatinate , page 28 ff.)

During the Reformation , the inhabitants of the city and its surrounding area sympathized with Lutheranism as early as the 1520s, which was initially tolerated by the sovereign and officially introduced in 1556. The population offered active and passive resistance to various attempts by later electors to enforce Calvinism . After Maximilian of Bavaria received the Palatinate electoral dignity in 1623 and the Upper Palatinate and the Middle Palatinate on the right bank of the Rhine from the Emperor, his subjects had to become Catholic again.

During the Thirty Years War (1618–1648) Auerbach was captured several times by Swedish and Bavarian troops. A great plague epidemic in 1634 also made the residents feel very bad in the first half of the 17th century.

The expansion of the Grafenwöhr military training area from 1936 represented a huge cut in the development of the city ; Auerbach lost part of its eastern hinterland, the district court and 24 places with their residents.

In the district of Michelfeld there is the former Benedictine monastery Michelfeld, which houses a Regens-Wagner facility . The baroque parish church of St. Johannes Evangelista with works of art by the brothers Cosmas Damian and Egid Quirin Asam is worth seeing .

The local elections on March 15, 2020 resulted in the following occupation for the next six years:

Compared to the 2014 to 2020 term of office, the CSU and the Christian Umland Union each had to surrender one seat, the Young Free Voters and the Young Auerbacher Umland each came with one mandate to the city council.

The first mayor has been Joachim Neuss since May 1, 2008, who was nominated by Free Voters / Aufschwung Auerbach and was confirmed for another six years on March 15, 2020 with two competitors with 64.86% of the votes.

Official description of the coat of arms

Blazon: “A gold-armored aurochs striding in silver on a green three-mountain, who wears a square shield around his neck on a red strap; therein in 1 and 4 a lion crowned in red and armed in red , in 2 and 3 the Bavarian diamonds. "

History of the coat of arms

Even the oldest seal of Auerbach found so far from 1409 contains the Ur or Auroch as a heraldic animal. It is therefore a talking coat of arms . In 1819 it had to give way to a rather simple and not very informative city coat of arms, because the mayor at the time did not want to sign next to an "ox". It was not until 1963 that the Auerochs was allowed to return to the Auerbach coat of arms.

Eisenstrasse and a church building

See also : List of architectural monuments in Auerbach in the Upper Palatinate 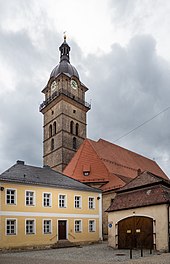 Tower of the parish church of St. John

Interior of the parish church of St. John 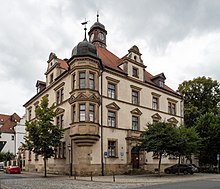 The Swedish Tower was originally built as part of the city's medieval fortifications. The round Swedish tower , which is around eight meters high today, was originally called the Faulenturm , and it owes the name of the Swedish tower to its owner from 1796, Kaspar Leißner, known as "the Swedish". He acquired the tower on the advice of the government from Mayor Ibscher, when the remaining city wall towers were auctioned. The adjacent alley bears the street name Am Schwedenturm .

Worth seeing in nature 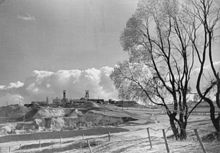 Iron ore was mined around Auerbach for centuries until 1987. That is why Auerbach is still popularly called mining - or mining town .

In 1904, sinking work for the Maffei I and Maffei II shafts began on the mine field in Nitzlbuch . The Leonie iron ore mine with its 194 meter deep shaft was only opened in 1977. There was a mine railway that transported the ore with six electric locomotives.

From 1903 to 1982, the mined iron ore was first transported by cable car from the mines to Auerbach station and then by rail on the Ranna – Auerbach railway to the blast furnaces of the Maxhütte in Sulzbach-Rosenberg.

The Leonie iron ore mine was not closed until the Maxhütte in Sulzbach-Rosenberg went bankrupt in 1987 . Today the site is the Grubenfelder Leonie nature reserve and is kept open by grazing with Heck cattle and Exmoor horses . In the vicinity of the district of Ranna there are strong springs that feed Nuremberg's drinking water supply.

Until March 21, 1982 Auerbach was the end point of the Ranna – Auerbach railway line . The route is dismantled today.

In the district of Michelfeld, the Pegnitz Valley Railway (KBS 891) crosses the municipality, but there is no traffic stop.

In terms of tariffs, Auerbach is integrated into the transport association for the greater Nuremberg area (VGN) and the Upper Palatinate North fare association (TON).

The local bus companies have joined forces to form the Amberg-Sulzbach transport association and operate the following bus routes, which open up the municipality:

The Franconian Marienweg runs through Auerbach .

Since 1987 there has been a communal grave in the cemetery with the remains of 32 Soviet prisoners of war from Stalag IV B Falkenau / Eger, who were reburied from a former cemetery at the Grafenwoehr military training area . A Russian Orthodox grave cross with a plaque commemorates them.

Commons : Auerbach in the Upper Palatinate  - collection of images, videos and audio files

Municipalities in the district of Amberg-Sulzbach

Districts of the city of Auerbach in the Upper Palatinate