This article treats iron ore as ferrous rock; for the city in Styria see Eisenerz (Steiermark) . 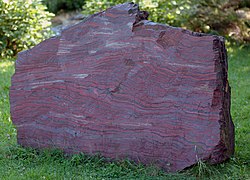 Iron ores are mixtures of naturally occurring chemical compounds of iron and rock that contains little or no iron . The natural iron compounds are referred to as iron ore minerals and the rest of the rock is called gangue or deaf rock . The iron ore minerals in the economically important deposits are mostly iron oxides or iron carbonates. Iron ores , in which iron is combined with sulfur (e.g. in pyrite ) or other elements, are also mined and smelted in small quantities .

Ore deposits are often of magmatic origin. In geologically active areas, magma penetrates the earth's crust with a high proportion of valuable metals . When the magma cools, the minerals crystallize and ore deposits are formed.

Iron-rich melt rocks are either relocated or dissolved and excreted elsewhere, for example in black smokers . The latter iron ore formations are referred to as sedimentary-exhalative formations . These include a. the iron ores of the Lahn-Dill type.

Certain bacteria form elemental oxygen as a metabolic product and thus lead to the oxidation of Fe (2+) (divalent) to Fe (3+) (trivalent). Fe (3+) compounds are much less water soluble than Fe (2+) compounds. The corresponding iron oxides / oxide hydrates (red after diagenesis / metamorphosis ) are therefore precipitated as long as there is still enough Fe (2+) dissolved in the seawater. To tapes ores may occur when the metabolism of the bacteria under adverse conditions is lower (lower temperature, less food supply, etc.). Then mainly silicates (clay) or silica gel (solidified: chert , chalcedony, corresponds roughly to jasper), which appear light gray. This alternating position then leads to the banding red to dark gray-light gray. It is assumed that this oxidation of Fe (2+) in the oceans by bacterially formed oxygen prevented the oxygen content of the atmosphere from rising for a long time. Only when the dissolved iron in the oceans was oxidized and precipitated did this bacterially formed oxygen reach the atmosphere.

This creates layers of different colors, hence the name.

Turf iron ores are the oldest sources of iron for humans, apart from the very rare iron meteorites , they are the easiest to break down and reduce ( limonite ), but mostly small-scale and quickly exhausted.

Iron can be transported as more easily soluble Fe (2+) (e.g. dissolved from weathered silicate rocks) and precipitate and accumulate in the soil after oxidation from these iron-containing solutions. Karsten / weather z. B. slightly iron-containing limestone, then the iron-containing solutions often fall in karst crevices, cavities after oxidation to Fe (3+) and form concretions from iron oxide hydrates (limonite). These are mostly in a clay base (bolus), which forms an insoluble weathering residue of the limestone. The limonite concretions were called floor ore and formed z. B. as so-called Dogger ores in southwest Germany (Markgräflerland, plateau of the Swabian Alb, also in the Swiss Jura) the basis of a small iron industry.

The states with the greatest funding 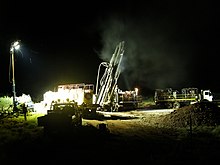 In the Amazon jungle of Brazil, in the Serra dos Carajás, is the largest iron ore deposit in the world with an estimated 17 billion tons of strip iron ore, which is extracted in a huge open pit ( Carajás mine ).

The four most important iron ore producing countries with a total of 83% of world production (2009) are China , Brazil , Australia and India .

The following is a presentation of the ten largest exporting countries of iron ore measured in terms of export value in 2018. The worldwide export volume of iron ore added up to a total of 79.3 billion euros. 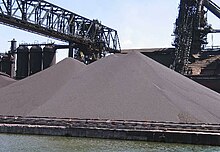 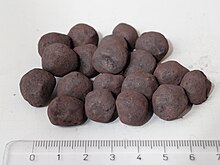 After extraction , the iron ores are processed at the mining site and separated from most of the gangue. This significantly reduces the costs for transport and further processing.

When processing the iron ore, the raw material is first crushed in several steps. Cone crushers or jaw crushers as well as mills such as ball mills are used as crushing units. When a sufficiently large digestion has been established, further sorting takes place. Possible process steps are flotation and magnetic separation . The iron ore concentrate is then processed into iron ore pellets .

Reduction of iron ores in the blast furnace

In the blast furnace process, the iron oxide is deprived of oxygen through a chemical reaction with carbon and carbon monoxide . This type of reaction, in which the iron oxide is reduced and the carbon oxidized, is called the redox reaction .

Other oxides , such as manganese dioxide and silicon dioxide , are also reduced in the process. The iron also absorbs carbon. That is why the blast furnace process does not produce pure iron, but rather pig iron that contains carbon, silicon , manganese , phosphorus and sulfur . Then steel is produced from the pig iron (see: Steel production ).