The rock metamorphosis ( ancient Greek μεταμόρφωσις metamórphosis , German 'transformation' , 'transformation') is the transformation of the mineralogical composition of a rock by increasing temperature and / or pressure. This produces from the source rock, also known as protolith or starting material is referred to, a metamorphic rock ( metamorphic ).

During metamorphosis, mineral reactions occur, i.e. new or remodeling of minerals , whereby the rock remains in a solid state. If, on the other hand, rock melts, one speaks of anatexis .

The name comes from Charles Lyell , but the idea was already advocated by James Hutton in the 18th century (and a few others).

A distinction between rock metamorphosis and diagenesis , the processes that lead to the formation of sedimentary rocks from sediments, cannot be drawn precisely, since new and remodeled minerals can also occur during diagenesis. There are different definitions according to which a metamorphosis can be used when certain minerals appear or no longer exist or when certain pressure and temperature limits have been exceeded.

During metamorphosis, the chemical composition of the rock often remains unchanged; one speaks of isochemical metamorphosis. Since fluid phases can always be involved in a metamorphosis, this condition is rarely strictly fulfilled. If the element composition of a rock is significantly changed, there is metasomatosis . This does not apply if only H 2 O or CO 2 are added or removed.

In principle, two types of rock transformation are observed:

By phase transformations new minerals from the existing incurred (mineral reactions). Minerals can only coexist under certain pressure and temperature conditions. If these conditions are no longer met, the minerals can react with one another to form other minerals. Such mineral reactions are often very complex. Some of the newly formed minerals set other substances in these reactions, e.g. B. Free water or absorb it, this leads to the above-mentioned phenomenon of metasomatosis.

In the crystallization of minerals leads to structural transformations in the rock. By Einregelung by pressure solution processes after Rieck ash principle or the oriented growth of minerals in the rock forms a cleavage , which is more pronounced the more layered silicates (mica) in the rock are present.

The possible course of a rock metamorphosis depends on the pressure and temperature conditions passed through. These can be very different and thus cause different types of metamorphosis. Rocks that have undergone a certain type of metamorphosis often have characteristic features, for example certain mineral paragenesis , structural features and the like. a. from that. 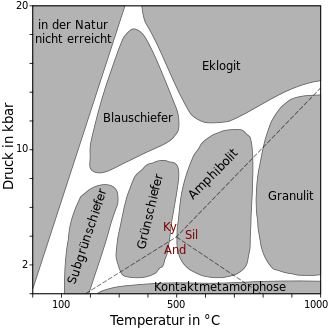 The addition "regional" means that this type of metamorphosis takes place over large volumes (sometimes over several 1000 km³), mostly caused by tectonic subsidence of large parts of the earth's crust . Rocks are submerged, for example by folding or subduction at the continental margins, under high pressure and / or temperature, which equally determine the transformation of the minerals. Typical rocks are, for example, mica schist , gneiss and amphibolite .

This very extreme type of metamorphosis is caused by violent shock waves and can lead to the shattering of entire rock sections and the destruction of crystal lattices . It is restricted to meteorite craters (and to the sites of underground atomic bomb tests). In the area of ​​the impact crater, high temperatures and pressures are generated, whereby rocks are melted and thrown out and then solidify to form spherical glass aggregates ( tektites ). Typical characteristics of impact metamorphosis are the appearance of high pressure minerals such as coesite or, due to the collapse of crystal lattices, of diaplectic glass . The impact metamorphism leads to the shattering of rock bodies that are macroscopically visible (e.g. in the suevite of the Nördlinger Ries ).

The dislocation metamorphosis is also called dynamometamorphosis . In active fault zones , the rock is changed significantly by the movement of two blocks against each other. If the rock reacts brittle to mechanical stress , that is, it breaks and is ground up, cataclasites are formed . If the rock reacts ductile to mechanical stress, recrystallization creates mylonites with a characteristic structure that is characterized by constant movement.

During earthquakes, there is a short-term and sudden movement of pieces of rock. If cavities open in the process, implosion breccia can arise in them due to the sudden release of pressure , which fill the cavity again. Due to the frictional heat generated by a sudden movement on the movement surface, this can lead to brief melting of pieces of rock and the formation of pseudotachylites . Diaplectic glasses can also arise from the collapse of crystal lattices.

Classification of the metamorphosis

There are different systems for describing the degree of metamorphosis that a rock has reached. In analogy to the facies of sediments, metamorphic conditions (pressure, temperature) can be summarized by metamorphic facies groups.

Compared to diagenesis, metamorphosis cannot be clearly differentiated, since similar processes take place during the diagenetic transformation of a sediment into a rock. An arbitrary delimitation is often made when certain pressure and temperature conditions have been exceeded. The border area to diagenesis is often referred to as anchimetamorphosis .

The anatexis, which leads to partial or complete melting of rocks, is also a process in the border area of ​​rock metamorphosis. Metamorphosis always takes place in the solid state, while in anatexis melts are formed.