Folding at Ágios Pávlos on Crete

Folded limestone layers in the Glasenbachklamm near Salzburg

A fold is the bending or curvature of one or more geological interfaces such as the stratification of sedimentary rocks or the contact surfaces of an igneous dike with its neighboring rock. Folding is the process of fold formation, but in regional and historical geology it also describes mountain-forming events that can be separated from one another . A fold can be regional or macroscopic.

When folded, rock layers are usually deformed in waves by pressure from the outside. According to the mechanical behavior of the rock layers when folding, one differentiates:

If a sedimentary rock with alternating competent and incompetent layers is deformed, part of the incompetent matrix “flows” into the fold hinges.

At relatively homogeneous substrate to form bending folds arise at widely varying in strength layers Scherf elderly or small-scale movements in very mobile rock such as magma melt flow wrinkles . However, the rock must have a certain degree of heterogeneity in order for the fold to be visible at all. Due to their formation, chronological sequence or form, folds in an area that belong together are called a fold system. The term folding system is furthermore used as a synonym for fold mountains or fold belt .

Description of the fold

Fold terminology, here using the example of a symmetrical fold

The fold can be open at the top (Synform) or at the bottom (Antiform). Both terms describe the shape.

However, the terms syncline and anticline mainly describe the age of the rock that lies on the inside of the fold. The deposition takes place according to the stratigraphic principle , thereby younger layers are deposited higher up. In the case of an antiform, the older layer comes to lie on the inside (anticline antiform), in the case of a synform, the younger layer comes to lie on the inside (synclinal synform). If the age sequence is from top to bottom (e.g. through thrusts), the relationships in the fold change. If the age sequence is reversed, therefore the antiform has young material in the core, one speaks of an antiform syncline and the synform of older material in the core of the fold is called a synform anticline. 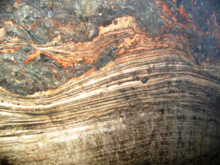 Folded rock ( Hasel Mountains ) in the Berchtesgaden salt mine

Parasitic folds or second-order folds are smaller folds within a larger fold. As a result, it is possible to draw a conclusion about the fold of the 1st order due to the parasitic fold. Parasitic folds can be divided into Z, M, and S folds because they look similar to these letters. The vergence occurs clockwise with Z-folds, counterclockwise with S-folds and the M-folds are symmetrical (no vergence).