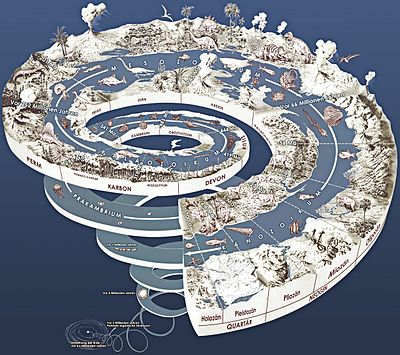 The historical geology is a branch of geology . Your research and teaching subject is the history of the earth , that is, the period from the formation of the earth to the (geological) present .

In contrast to historical geology, the history of geology deals with the development of this very natural science.

The most important evidence of the geological past are rocks . The nature of the rock bodies ( lithofacies ) and, only in the case of sedimentary rocks , the fossils enclosed in them ( biofacies ) are of particular importance for the reconstruction of the geological history . The overall picture results from the spatial relationships between the rock bodies, which not least allow conclusions to be drawn about the chronological sequence of their formation. For example, in a stack of layers of sedimentary rocks, ideally the oldest layers are at the bottom and the youngest layers are at the top. The geological discipline that deals with the temporal relationships of rock bodies is stratigraphy . While stratigraphy originally only allowed a relative age determination ( dating ), especially with the help of fossils (see →  Biostratigraphy ), modern geochronological methods also allow rock bodies to be absolutely dated to a numerical age. Absolute dating is done primarily with the help of radiometric measurements in suitable rocks, especially igneous rocks or in sediments of primarily igneous origin .

The numerous and steadily growing knowledge of the various branches of stratigraphic research, but above all biostratigraphy and geochronology, flow into the current geological time scale (see also below ). The comprehensive determination of the tectonic structure of the earth's crust, the magnetization of rocks , especially the oceanic earth's crust , as well as the geographical distribution of certain fossils in sedimentary rocks of the same age also enable the reconstruction of the movement of the tectonic plates in the past.

The history of the earth encompasses unimaginably long periods of time by human standards, in millions of years (Ma; also mya , English million years ago , ' million years ago ' - the exact current date of any calendar system used by humans does not matter in such periods) or even in Billions of years (Ga or gya) are given. Even at a relatively early stage in the development of modern geology, geologists tried, without knowing the actual dimensions of geological time, to systematically structure the rock tradition and to put it into a chronological order as well as to organize it hierarchically. From these early attempts, which mostly had a strong regional reference, the modern, global geological time scale emerged (for more information on systematics, methodology and history, see there).