The Triassic ( give a wiki. Τριάς, gen. Τριάδος = Trinity, number three; adj. Triassic, rarely triadic) is in the geological time scale , the lowest system or the oldest period of the Mesozoic (Mesozoic). It follows the Permian and precedes the Jura . The Triassic therefore extends over the period from 251.9 to 201.3 million years ago and lasted 51 million years.

The name Trias was proposed by Friedrich von Alberti in 1834 after the trisection of red sandstone , shell limestone and keuper, which was noticeable in Central Europe , and quickly found acceptance in geological literature. However, this classic tripartite division is only developed in the Germanic Basin . Accordingly, the three divisions of the Germanic Triassic are now only understood as lithostratigraphic units. According to the internationally valid subdivision of the Triassic, a distinction is also made between three series : Lower, Middle and Upper Triassic (or Lower, Middle and Upper Triassic), but their boundaries do not coincide with the lithostratigraphically defined boundaries of Buntsandstein, Muschelkalk and Keuper.

The lower limit of chronostratigraphic system of the triad (and thus the Lower Triassic series and the Indusium stage) is determined by the first appearance of Conodonten -type hindeodus and the end of the negative carbon anomaly after the peak of the mass extinction at the Perm-Triassic Are defined. The corresponding GSSP (Global Boundary Stratotype Section and Point = “Profile and point of the global boundary stratotype ”) is the Meishan Profile D in Changxing County in Zhejiang Province ( China ). The upper limit, at the same time the lower limit of the Jura or the Hettangium , is primarily defined by the first appearance of the ammonite Psiloceras spelae tirolicum . The corresponding GSSP is located at the Kuhjoch in the Karwendel Mountains ( Northern Limestone Alps ).

Subdivision of the Triassic

The Trias system is divided into three series with a total of seven levels :

The Lower Triassic used to contain only one level, the Scythium , which has since been abandoned in international usage. However, it is still used in the Alpine region as a regional level. In the biostratigraphy in particular, other subdivision approaches are also represented. Edward Timothy Tozer proposed in 1965 a four-level subdivision of the Lower Triassic into Griesbachium , Dienerium , Smithium and Spathium . In 1978 Guex proposed a tripartite division by merging Dienerium and Smithium into a new level Nammalium .

The stratigraphic structure of the Triassic is mainly based on the group of ammonoids ; Presumably only two genera survived the turn of the Permian / Triassic period, but more than 100 genera can already be found in the lowest Triassic. Other important key fossils are conodonts , bivalves ( mussels ), crinoids , calcareous algae (especially Dasycladaceae (whorl algae)) and mussel crabs (ostracoda).

During the Permian period, with the collision of Siberia, the supercontinent Pangea was formed, which, apart from a few smaller terranos in the east of the Palaeotethys, united almost the entire continental crust of the earth in one continent. However, the decay began in Upper Permian. In the Upper Permian, the Cimmerian Terrane broke away from the northern edge of Eastern Gondwana . Between this terran group and Gondwana, the Neotethys arose, and the Paleotethys was subducted under this terrane. To the west, the Neotethys wedge widened further west. In the Upper Triassic the opening of the later North Atlantic began to show itself. Between (later) North America and (later) Europe, rift systems developed that took up large amounts of sediments and volcanic rocks. The first marine ingresses into these rift systems occurred in the course of the Upper Triassic.

During the Triassic period, a warm climate prevailed almost continuously, although it was subject to strong fluctuations at the beginning of the period. Europe lay in the subtropical desert area. The global climate also seems to have been rather dry: The reason was the shape of the supercontinent Pangea and a resulting monsoon effect , in which the summer low pressure areas above the land mass mainly sucked in air from other inner parts of the country and not from the ocean, similar to the current situation in southern Arabia. In the interior there were presumably extensive deserts. According to the current reconstructions, a part of Eastern Siberia was located near the geographic North Pole .

The biological, geophysical and climatic late effects of the mass extinction at the Permian-Triassic border extended in part to the Middle Triassic . While the ammonites , conodonts and foraminifera recovered within 1 to 3 million years, other marine habitats such as coral reefs took around 8 to 10 million years to fully regenerate. Occasionally, some more robust species occupied the orphaned habitats ( “disaster taxa” ) with massive reproduction before they were displaced from it again.The gradual renewal of the biotopes damaged by extreme warming, major fires, acid rain and oxygen shortage was interrupted several times by further extinction events , with a focus on the chronostratigraphic lower levels of Smithium and Spathium . This is most evident in the delayed expansion of the forests, which only settled in larger areas again after 15 million years. Another factor that inhibited vegetation growth was an arid zone running across Pangea between 50 ° north and 30 ° south latitude, in which temperatures of 35 to 40 ° C prevailed in places.

A selection of fossils from the Triassic period, mainly from Central Europe and the Alpine region

The turn of the era from the Permian to the Triassic is associated with a pronounced shift in fauna . This is so drastic that, due to the significantly changed fossil record, the turn from Permian to Triassic is not only the boundary between two periods , but also between two eras in geological history, the Paleozoic and the Mesozoic. Numerous groups of marine invertebrates disappear completely or finally from the fossil record, including the trilobites and rugose and tabular corals , which are among the most important reef builders of the Upper Paleozoic. Furthermore, among the large two-valve organisms, the brachiopods lose their predominance to the mussels that are not closely related but ecologically similar . In the ammonoids , the long dominant goniatites are replaced by the ceratites .

The fauna of terrestrial vertebrates is also undergoing significant changes. Of the more basal Therapsids , which dominated the terrestrial macrofauna in the Higher Permian, only two large groups survive strongly decimated the Permian-Triassic boundary: the Dicynodontia (with, among others, Lystrosaurus ) and the Cynodontia . The Therapsids can assert an important role in the ecosystems up to the Middle Triassic, but, unlike in the Permian, experience strong competition from representatives of the Eureptiles and especially the Diapsids . With, among others, the herbivorous rhynchosaurs and the carnivorous Proterosuchidae , Erythrosuchidae and Euparkeria , these are especially groups from the "Archosaurian line" of the Diapsids ( Archosauromorpha ). Of the parareptiles that were relatively successful in the Permian , only one group, the procolophonoids , made it into the Triassic.

In the course of the Middle Triassic and especially in the Late Triassic, developments finally take place that are decisive for the further evolution of the Diapsids in the Mesozoic and in some cases even beyond: A basal line of the Archosauromorpha splits into the two lines that make up the pterosaurs (Pterosauria) and dinosaurs on the one hand and the ancestors of the crocodiles (early Crocodylomorpha ) on the other. The latter are traded as producers of chirotherium , one of the most famous trace fossils of the Triassic. With the Phytosauria there are the first very crocodile-like representatives in the late Triassic, but the Triassic swamps are still dominated by some very large representatives from the Temnospondyli lines Trematosauria and Capitosauria , e.g. B. Mastodonsaurus . 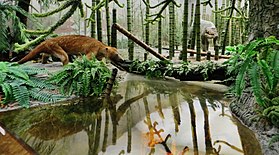 Reconstruction of a late Middle Triassic wet landscape in what was then Central Europe ("Keuperglades"). On the left in the picture the very mammalian cynodontic animal Chiniquodon theotonicus , on the right, further in the background, the Rauisuchid Batrachotomus kupferzellensis , a top predator of its ecosystem.

While only a few aquatic reptiles are known from the Permian, in the Triassic numerous large groups successfully conquered not only freshwater habitats but also the seas and maintained them until almost the end of the Mesozoic. The strongest adapt this ichthyosaur (Ichthyopterygia) appearing in the early Triassic, this habitat at. In the middle Triassic, the Sauropterygians (including Nothosaurus , Placodus ) are another group of marine forms. A few Triassic sphenodontic animals , early relatives of today's bridge lizard , are aquatic animals. The "primeval turtles" Odontochelys and Proganochelys also live aquatic in the late Triassic .

The enormous rise of the Diapsids in the younger Triassic was accompanied by a decline of the contemporary Therapsids. However, at the end of the Triassic with more advanced Cynodontians such as Adelobasileus and Haramiyavia, forms appear that are already very mammalian.

Furthermore, the first modern amphibium appeared in the early Triassic with Triadobatrachus . 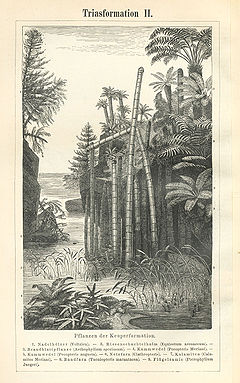 The Bennettiteen ( Bennettitales ) represent a transition to the Bedecktsamern (Angiosperms) . These plants, which still belong to the Nacktsamern, already had organs similar to those of the Angiosperms. The shape suggests pollination by insects. However, they are not regarded as direct ancestors of angiosperms. They first appeared in the Upper Triassic and survived into the Cretaceous. The palm-like genus Williamsonia appeared in the Triassic with trunks up to two meters high. Other genera were Williamsoniella (Middle Jura), Wielandiella (Upper Triassic up to the Jura) and Cycadeoidea (Lower Cretaceous).

Among the seed ferns , the tree-shaped genus Dicroidium took the place of Glossopteris on Gondwana .

A typical representative of the spore plants for the red sandstone (Lower Triassic) is Pleuromeia , which belongs to the fossil order Pleuromeiales of the bear moss plants . It resembles Sigillaria , a bear moss plant of the paleophytic .

The end of the Triassic, like the end of the Permian , was marked by a major global extinction event. This extinction on the Triassic-Jurassic border is traditionally counted among the " big five ", the five most significant events of this species during the Phanerozoic Era , and it is estimated that around 70 to 75% of the species and 40% of the genera disappeared . As with the Permian Triassic mass extinction, a phase of intense volcanism is assumed to be the cause, which leads to disturbances in the material cycles on a global scale and thus to climatic instabilities and oceanic anoxia up to the uppermost areas of the water column (so-called photic zone euxinia , PZE) and resulted in the collapse of both marine and terrestrial ecosystems . While the Siberian flood basalts are held responsible for the Perm-Triassic Crisis , in the case of the Triassic-Jura border it is the Central Atlantic Magmatic Province (CAMP) that in the course of the rift formation (rifting) at the beginning of the opening of the Originated in the Central Atlantic. The main phase of flood basalt volcanism began 201.5 million years ago, lasted approximately 600,000 years and probably had four short-term activity peaks.

Several recent studies conclude that the focus of mass extinction was around 100,000 years before the eruptive flood basalt phase of the CAMP event. According to these analyzes, activity in the Central Atlantic Magmatic Province began at an intrusive stage . In the course of this process, large amounts of magma flowed into evaporite and carbonate deposits (with additional proportions of hydrocarbons ) and over periods of several thousand or ten thousand years caused the outgassing of carbon dioxide in the five-digit gigatons range through contact metamorphosis , combined with a significant increase in global temperature.

The Triassic in Central Europe

The typical tripartite division of the Triassic rock units in the Germanic Basin cannot be seen in the Alps. This area is called the Alpine-Mediterranean Triassic (also Alpine Triassic or Pelagic Triassic ). Their predominantly marine deposits are much more powerful than those of the Germanic Triassic . In addition to shallow sea reef complexes (e.g. Wetterstein limestone), there are layered deposits of clays, limes and marls that were formed in deeper water.

The original type localities of the chronostratigraphic levels of the Central and Upper Triassic lie in the Alps. The Scythian , the only level of the Alpine Lower Triassic, was not adopted into international usage.

Artist's impression of a desert landscape from the “Red Sandstone Age” (early Triassic) from 1930; in the foreground a reptile, which has left traces of chirotherium , in the background the shallow sea that has occasionally entered