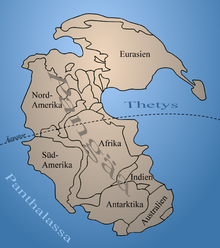 Location of the oceans and land masses in Unterperm

Development from Avalonia , Baltica and Laurentia to the northern supercontinent Laurussia ( Ordovician to Devonian ). 50 million years later (in the Carboniferous ) the union with Gondwana to Pangea took place.

The formation of the Appalachians

(The) Pangea was a primary continent that comprised all of the Earth's land masses present in the Permian . The name goes back to Alfred Wegener . Since the development of the theory of plate tectonics , Pangea has been referred to as a supercontinent , the last in the history of the earth . This continent existed from the Late Carboniferous (325 million years before today) to the Jurassic (150 million years before today), i.e. in the period in Earth's history when the great mass extinction took place at the end of the Permian and the evolutionary development of the dinosaurs began . The extension of Pangea, including the shelf base, was around 138 million km², of which 73 million km² was in the southern area with the former major continent of Gondwana .

The concept that at the end of the Paleozoic all continents were united in one supercontinent comes from Alfred Wegener , who first published this idea in 1912. He later expanded this work into his famous book The Origin of the Continents and Oceans , which appeared in six editions from 1915. In the second, completely revised edition of 1920, the term Pangea appears for the first time . This name is a modern word creation by Alfred Wegener (1920) and is made up of ancient Greek πᾶς pās pan- ' Ganz , all' and γαῖα gāia earth, country 'and found its way into German and English-language literature (especially through the Volume of the symposium at a congress of the American Association of Petroleum Geologists in November 1926). Alfred Wegener himself used the term only once in his work.

Pangea was created by the merger of Laurussia - the Old Red Continent - and Gondwana - the Great Southern Continent - by closing the Iapetus Ocean and the Rheic Ocean . The collision of the two continental plates interrupted the water and heat exchange of the equatorial ocean currents. As a result of the restricted oceanic circulation, the global cooling trend that began in the Carboniferous intensified and lasted into the Permian ( permocarbonic glaciation ). In addition, a seasonally occurring, very strong monsoon influence (“mega-monsoon”) developed parallel to the equator between latitude 30 ° north and 30 ° south , from whose precipitation the coastal regions in particular benefited.

The smaller Peri-Gondwana elements Perunica , Armorica , but also the cratons of today's Siberia , Kazakhstan , northern and southern China and several volcanic island arcs were further constituents. Pangea was surrounded by the global ocean Panthalassa and its huge eastern bay, the Tethys .

In the course of the collisions of the continental floes in the Paleozoic, mountain formations occurred , evidence of which is still present in some of the rump mountains in western Europe and North America. For example, heavily folded parts of the crust of Avalonia - from the first collision with Baltica and the second collision with Laurentia - can be found in Newfoundland , England , northern Germany , in the Carpathian Arch and on the Balkan Peninsula, as well as in Spain and Morocco .

The first of these mountain formations are the Taconian and the Caledonian orogeny in the late Ordovician and Silurian (444–416 mya ). Were affected by it

During the Triassic period (from 250 mya) in what was later Central Europe, the layers of the Germanic facies , which were relatively heavily influenced by continental sedimentation, were formed , while in what is now southern Europe and the Alps there were more marine deposits of the Tethys .

Tectonic side effects and consequences

All mountain ranges of these epochs are so sedimented by erosion that the former six- to eight-thousand-meter peaks are at best visible as rump mountains or form layers in later mountain formations . Particularly interesting is the fact that sediments from the Iapetus Ocean can be detected as a suture in both the Appalachians and the Caledonian Mountains . This means that exactly at the original “weld zone” of the continental floes after 150 million years - at least in part - they also fractured.

As with any mountain formation, older rock layers were uplifted : In the Bohemian mass of the Waldviertel in Lower Austria , the Variscan uplift events "folded up" gneiss from the Rodinia supercontinent from 1.1 billion years ago or pushed them onto younger rock layers.

The Variscan mountain formation also resulted in magma rising from the depths, which in some places led to ore deposits . Due to the subsidence in the foreland of the geosyncline, eroded masses of rock debris and fine sediments have also been deposited there (see also sediment basins ). Thanks to these processes u. a. the Ruhr area with its numerous coal seams .

As a result of plate tectonic processes, Pangea began to break apart from the late Triassic (around 230 mya). The disintegration was initially limited to the southern part ( Gondwana ), with the Tethys opening to the west and the central and south Atlantic, as well as the Antarctic and Indian Oceans. Geological evidence of the incipient decay include the Triassic-Jurassic rift sediments and basalts of the Newark Basin in eastern North America and the Jurassic basalts (including the Drakensberg ) and dolerite veins in the Karoo Basin in southern Africa. The former northern part of Pangea ( Laurasia ) still existed until the early Cenozoic , as the North Atlantic only gradually opened up at this point in time.

The mantle beneath Pangea's former position is still hotter than anywhere else. Therefore, Africa is about ten meters higher than the other continents.