This article explains the geological term kraton . For other meanings, see Kraton (disambiguation) . 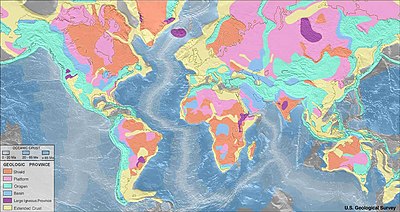 Simplified geological structure of the earth. The cratons are represented by the panels (pink) and shields (orange).

On the other hand, the edges of the continents often consist of younger crustal parts that have been attached to the cratons in the course of the earth's history through mountain formations .

The continents' cratons are divided into two parts:

Cratons are tectonically particularly stable, which means that they do not tend to deform under tensile or compressive stress , or in other words, that they are neither prone to rift formation nor to mountain formation . This is due, among other things, to the particularly great thickness and the relatively low temperature of its subcrustal lithosphere. This lithospheric mantle keel can reach depths of 250 to 300 kilometers. Due to its chemical composition, it has a particularly high melting point. The Cratonic crust, on the other hand, has only average thicknesses of 35 to 40 kilometers.

Cratons originated mainly in the Archean related to the then higher temperatures in the mantle. The asthenosphere below cratons is usually relatively weak or nonexistent.

The cratons , which extend up to 200 kilometers into the earth's mantle - originally igneous , but mostly metamorphically shaped over time - made of relatively light rock (to the rest of the earth's crust ) can be roughly divided into the following provinces according to their age:

Phanerozoic evolution of the cratons

After the Proterozoic or even longer, cratons did not undergo any tectonic transformation such as folding, bulging or the like, so they have remained largely unchanged over eons . They are the cores of the continents and were mostly already intensely folded in the Precambrian by tectonic processes, metamorphically transformed or intruded and severely eroded at great depths .

Geologically, cratons are divided into shields and panels . In the shields, the crystalline basement is largely exposed, as the continental crust there has a low density and high thickness and is therefore constantly isostatically uplifted . In the table or platform regions, the shields are covered with undeformed sediments ( overburden ). As a rule, these sediments lie on the basement in a discordant manner , since the former had undergone a mountain formation and thus a phase of erosion before the table sediments were deposited . Accordingly, there is a time gap between the youngest rocks of the shield and the oldest (furthest below) rocks of the sedimentary cover. Since the crust of the basement of the tablets has a smaller thickness and a higher density than that of the shields, it has less upwelling and has therefore been covered several times by an epicontinental sea over the past 500 million years , which was ultimately the cause of the deposition of the table sediments .

Cratons have old fault zones that can be reactivated in the event of tectonic stress. For example, some cratons show active or stopped rift breaks , whereby thick layers of sediment were and are still being deposited in these trenches, and in some cases large amounts of volcanic material were brought to light.

Because minerals and rocks as well as the precious metals they contain , but also various gemstones in general and diamonds in particular, tend to be separated and distributed in the earth's crust or to be melted again in the earth's mantle, the oldest cratons - since they have been Aeons of no plate tectonic changes - of the greatest interest to prospectors and mining companies . So is - especially in Canada and Australia of using measurement - paleomagnetism and gamma radiometric , sonar reflex and other stratigraphic and geochronological working methods in the discovery and exploration of this ancient continental parts of the world. The inaccessible areas of the Siberian craton and the politically troubled regions of Africa that are interesting from a mining point of view are also in the interests of the global economy. The openly exposed craton of the Baltic Shield - the Kola Peninsula - is an important supplier of raw materials to Russia . The Antarctic craton is an exception . Their remote geographical location and the harsh climatic conditions prevented the exploration of deposits for a long time . Since 1961, the Antarctic Treaty has also prevented commercial use. 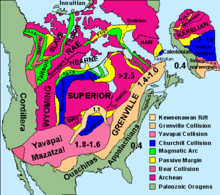 The tectonic provinces of North America (incl. Greenland ) and Fennoskandinaviens . Everything that is older than 600 million years, i.e. everything except the pale green areas, counts as cratonic in principle. It should be noted, however, that in North America the southwestern part of the craton was seized and lifted out by the Mesozoic mountain formations ("Cordillera") (including the Colorado Plateau ). In this context, one speaks of the metastable kraton (see also the figure above).

This is a list of well-known shields and cratons as well as some of the plates , panels , basins and fractures involved in them .