Deformation of a straight rod / plate into a circle / tube.

Distortion of a square to a diamond-like 4-corner, for example through a shear force or shear load . 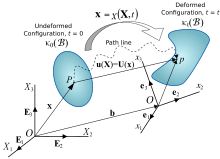 The object is moved from an undeformed starting position to a deformed position.

Deformations can be broken down into:

In addition, deformations consist of

Furthermore, deformations are divided into 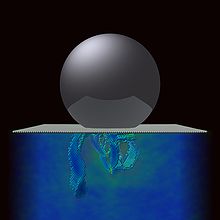 Atomistic view of the plastic deformation under a spherical indenter in (111) copper. All atoms in the ideal lattice structure are omitted and the color code shows the von Mises stress field .

If the material is very brittle, it breaks without any relevant deformation beforehand. With rocks , this is the case with displacements in the millimeter to centimeter range per year, while slower processes take place plastically (see fold (geology) , tectonics ).

Primary plastic deformation can also be completely reversible on the nanoscale. This assumes that no material transport in the form of transverse sliding has yet started.