A physical process is irreversible if it cannot be reversed in a closed system without leaving any changes in the system. The opposite is a reversible process . Although all microscopic elementary reactions are reversible, all macroscopic processes are, if you look closely enough, irreversible. The irreversibility results from the improbability of the initial state and justifies the clear direction of time (see time arrow ) and is closely linked to the second law of thermodynamics . All spontaneous processes are irreversible. 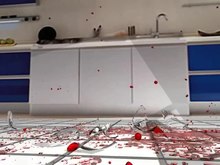 An example of an irreversible process is a glass that falls from a table onto the floor and shatters. According to Rudolf Clausius , this process is irreversible because it cannot spontaneously take place in the opposite direction. In fact, it has never been observed how the splinters of a glass spontaneously reassemble and the newly created glass jumped onto a table.

However, this definition is still incomplete, which Max Planck first recognized. To illustrate Planck's concept of irreversibility, we imagine that the broken glass is melted down, a new glass is created, which is then placed on the table. Now the original state (glass on the table) has obviously been restored, just in a different way. However, additional irreversible processes have taken place during the melting and shaping of the glass; the attempt to reverse an irreversible process has in turn left a deep trace of irreversibility in the environment.

A good definition of irreversibility is therefore the following: There is no way of reversing an irreversible process in any way and at the same time restoring all the tools that may have been used to restore them to their original state .

This Planckian formulation of irreversibility is much stronger than that of Clausius, since all freedoms and every means may be used to reverse a process. If one assumes that there are definitely irreversible processes in nature, such as the conversion of mechanical work into heat (e.g. through friction), it follows that thermodynamic states have a natural order in relation to their temporal (irreversible ) Own sequence. This order can be expressed for states of equilibrium by a measure, the thermodynamic entropy . According to the second law of thermodynamics , all processes are irreversible when entropy arises.