This article explains the component; for other meanings see bar (disambiguation) . 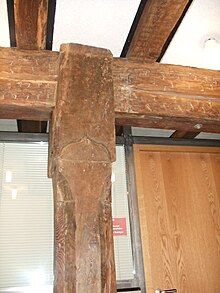 A beam is a load-bearing element in the building structure . Due to its shape and material properties, the beam is suitable for many functions. The designation according to the function of the beam, the installation location or the material is common.

Historically, the term “beam” in carpentry first referred to the wooden beam , the association is the beam structure or entablature . Later, the term was transferred to other identical construction elements made of different materials, such as hollow box or solid wall girders made of sectional steel or reinforced concrete . The balcony is related (porch on the cantilever).

'Beam' is a component- related expression: a geometrically defined cross-section (square, round, rectangular) and a length that is relatively large determine its shape.

Functionally, horizontal beams that are only partially supported are called girders . Beams clamped in on one side are cantilever beams . Beams in the frame construction are transoms , in the roof construction purlins . Depending on the area of ​​application and trade , vertical bars are referred to as columns , standing loaded as uprights , stems , loaded or unloaded as posts, and when suspended from tensile loads as hanging columns . Inclined beams can be found under names such as rafters (roof), as struts (technical trusses), head bands, bows (diagonal struts in wooden trusses). 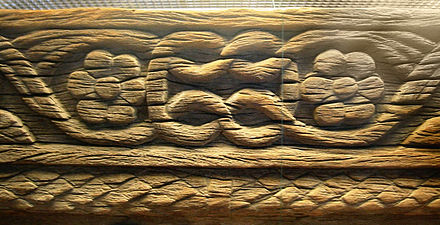 The wooden beam, also known in the region as a tram , is usually made by sawing a tree trunk ( timber ) lengthways. The grain direction thus runs in the sawing direction. In the past, beams were often made by cutting with a broad ax . The beam is the strongest class of sawn timber and is also simply called a “tree” (as it has been used as an expression for ships, cranes or roof structures).

Traditionally, the height of ceiling beams and rafters was chosen about 1.4 times greater than the width. Today there is a tendency towards double the height or even cross-sections that correspond to a plank placed on edge (e.g. 20 × 5 cm). However, the latter requires special measures to prevent the beam from twisting.

Beams are made by deliberately cutting up a tree trunk: a distinction is made between sharp-edged and mis-edged beams. Missing-edged beams still have remains of the contour of the tree trunk. After the possible longitudinal division of the tree trunk and use of the maximum trunk cross-section, a square or rectangular whole wood (one bar), half wood (two bars), cross wood (four bars) or sixth wood (six bars) is created.

All connection options and types of processing for wood are common on the beam and are determined by the type of application.