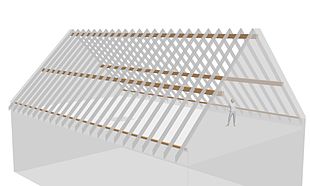 A purlin usually means a purlin , i.e. a horizontal beam in the roof structure . Purlins are usually parallel to the ridge and eaves of a roof.

Purlins are the distinguishing feature of the purlin roof . They carry the sloping beams, which are usually called rafters , in some areas also called Rofen .

The ridge purlin and the central purlin form the upper end of the roof structure in the narrower sense, while the foot purlin rests on the outer wall.

A rafter roof does not need purlins. If, on the other hand, a roof structure works without rafters and consists only of roof trusses and purlins, these are also referred to as purlin rafters (or rafter purlins ).

In half-timbered construction , the frame is also referred to as a purlin.

The ridge purlin is located near the roof ridge and carries its loads via supports, walls or roof trusses of a horizontal roof structure .

Central purlins , also intermediate purlins , are traditionally used in purlin roofs as a solid wood construction when the span of the rafters is more than 4.5 to 5.5 meters. Collar beam roofs are often only equipped with central purlins, as these are part of the stiffening roof structure .

The eave plate or Wandpfette is usually in the eaves of a roof on a floor ceiling or jamb . If it lies fully on the outer wall, it is also known as a wall lath and can be made weaker than the other purlins.

In solid wood constructions, two-span girders are often used due to the usual sawn timber lengths (6 m to 7 m, maximum 9 m) . With greater length of the roof box, two carriers are coupled to each other or joint carrier ( Gerber beam ) is executed.

With the usual sawn timber dimensions, spans of 4.5 m to 5.5 m are traditionally provided. With longer span (or high snow load ) also can glulam , - Wellsteg- or truss and steel profiles or steel profiles reinforced wooden cross sections as a single-span or continuous beam are used economically.