The title of this article is ambiguous. Further meanings are listed under rafters (disambiguation) .

Rafters (brown) in a purlin roof

In roof structures, rafters or rafters are the girders that run from the eaves to the ridge and support the roof cladding . When viewed from above, they are usually arranged at right angles to the ridge. The rafter comes either as an inclined single-span beam or inclined multiple - span beam , each with or without a cantilever arm . The rafters transfer the load of the roof skin in the rafter roof to the roof or ceiling beams and in the purlin roof to the purlins .

The word rafter has been used in German since the 11th century (Middle High German "sparre", Old High German "sparro"); it has a common basis with the verb "lock" meaning "straighten up beams, spread legs (like the rafters on the Roof) "assumed.

The lower end of a rafter is also known as the rafter foot ; if it protrudes over the edge of the outer wall and is visible from the outside, it is referred to as a rafter head .

The bird's mouth (see. To carve English. Carve, carving ) is to be here a dihedral notch (triangular cross section) from the bottom wooden rafters forth a horizontal usually bearing surface on a roof beam to create.

Rafters with a special shape and processing are: 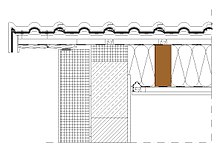 Installation situation of an 8/20 cm rafter. Detail section at the verge . From the outside (top) to the inside (bottom): roofing, battens, counter battens, sarking membrane, roof rafters with thermal insulation, vapor barrier, battens, plasterboard

In the past, only solid wood rafters were used in historical buildings . At the beginning of the 20th century it was recommended for such wooden rafters that their free length without support should not exceed 4 meters. Today, rafters made of glued laminated timber can be used to bridge much larger distances. Constructions made from other materials also exist, and so do rafters made from steel profiles , aluminum or reinforced concrete .

The rafter has the task of introducing loads into an underlying structure. This can be done, for example, via purlins in the load-bearing walls, or by means of a wooden roof truss . The DIN 1055 (loads in construction) distinguishes between permanent loads (the building itself), traffic loads , snow loads and wind loads . The distance between the rafters is given as the center distance ( e ) and in timber construction is usually between 50 and 100 cm, today often between 65 and 80 cm. With these rafter spacings, the statically necessary rafter dimensions between 6/12 and 10/20 cm result in solid wood. In the case of roofs over heated rooms, thermal insulation is usually placed between the rafters today . Increasing demands on thermal insulation in recent years have led to greater insulation thicknesses in Germany. Which in turn means that when dimensioning the rafters, not only static requirements play a role, but also the need to dimension them according to the required insulation thickness. In this respect, the rafter heights in new buildings are rarely less than 20 cm today.

Window openings in the roof surface or components that penetrate the roof, such as a chimney, make so-called replacements necessary. A horizontal upper change and a lower change distribute the load in the adjacent change rafters . Due to the static system, larger changes in the rafter roof and the related collar beam roof are considered problematic. Dormers that extend over more than two rafter fields should be avoided there. With purlin roofs , larger replacements are considered relatively unproblematic, and in this respect also the construction of larger dormers.