The wind load is one of the climate-related variable effects on structures or components. It results from the pressure distribution around a structure that is exposed to a wind flow .

It generally acts as a surface load perpendicular to the attack surface and is primarily composed of pressure and suction effects. In a building, for example, the flow slowdown creates an overpressure ( wind pressure ) on the surfaces facing the flow . In the area of ​​the roof and side surfaces, the air flow separates from the building edges and creates a negative pressure ( wind suction ) there. The wake vortex also creates a negative pressure on the back of the building.

In the standards, the wind loads are converted into calculated values ​​for determining the structural safety. Due to the strong temporal and spatial fluctuations, the pronounced stochastic character is taken into account.

The decisive influencing factors on the size of the wind loads are those of the location with the local wind climate and the topography . The wind climate is recorded, for example, in the Eurocode 1 or DIN 1055-4 standards using a wind zone map, which indicates decisive wind speeds averaged over time for various geographical regions. If the structure is very high, the wind speeds must be adjusted accordingly. The topography and nature of the surrounding terrain at the building site are recorded in the standards using terrain categories. 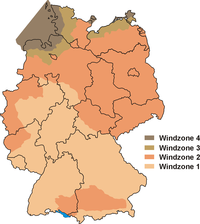 The values ​​apply to averaging over a period of 10 minutes with an exceedance probability of 0.02 within one year and to a height of 10 m above ground in flat, open terrain.

The reference dynamic pressure is determined from the basic value of the reference wind speed at a height of 10 m with an air density . The following applies

or with in and in 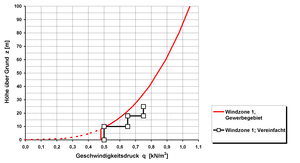 Other important influencing factors result from the geometry of the building or component. The wind speed at the earth's surface is practically zero and increases with increasing distance from the earth's surface, i.e. with the height of the building. For simple cases, table 2 of DIN 1055-4 shows the speed pressure for building heights of up to 25 meters. In addition to the building height, the geometric shape influences the magnitude of the pressure and suction forces, which is taken into account with aerodynamic factors. If there are no empirical values ​​documented in the standards, the parameter building geometry can be recorded by wind tunnel tests , possibly together with the influence of the local development.

The resulting wind force on a structure or component results from the product of speed pressure, aerodynamic force coefficients and structure area. Theoretically, the pressure coefficients can be a maximum of 1.0 (wind speed in front of the surface in front of the flow is zero), but usually fluctuate between 0.6 and 0.8. The suction coefficients are not physically limited in their magnitude and can be applied locally in the area of ​​roof edges, for B. be −2.0 or less. The suction forces in particular are usually responsible for wind damage to structures. For example, noise barriers in Germany must be calculated for a wind load of at least in accordance with the specifications of the road construction authorities .

The wind loads specified in the standards are static equivalent loads for rigid structures. With soft structures, such as suspension bridges , a dynamic interaction in the form of vibrations can occur between the wind and the structure . Wind tunnel tests are usually required here to correctly record the wind as an effect on the structure.