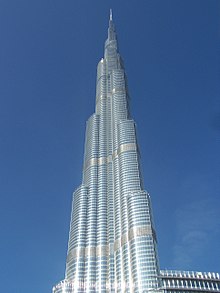 The Burj Khalifa in Dubai, completed in 2010, is 828 meters high and is currently (2020) the tallest structure in the world

A building (in Switzerland also Baute ) is one of people built structure that difficult to solve with the ground is connected, or at least is in static contact with him.

The term is delimited differently in different contexts. The demarcation to movable property and other objects that do not count as buildings is not entirely clear.

Relatively indisputably, man-made objects are considered to be buildings that are fixed and permanent (mostly on a piece of land ), therefore difficult to detach, connected to the subsurface (as if overgrown with the subsoil) and are therefore immobile. Therefore, these buildings count as real estate . This also includes structures that, as a result of their use, have movable or moving parts of the structure (e.g. revolving restaurant , revolving house , ship lift , non-temporary roller coaster , etc.).

In addition, temporary and relocatable objects with similar applications or functions (as buildings often have) are sometimes referred to as “temporary buildings”, “makeshift buildings” or “flying structures”. However, these are often not perceived as buildings in everyday life. The transitions are often fluid. For example, the case of a pile of firewood declared a building by the Potsdam city ​​administration became known nationwide .

Building is a sub-term of structure (see section Function ).

In German building law, buildings fall under the generic term of structural systems , which is defined in the respective state building codes of the individual federal states.

At the construction phase which closes usually use phase of. If a building is not completed for financial or other reasons, it is referred to as an unfinished structure or , colloquially, from an investment ruin . The use phase is often followed by dismantling or demolition , or there is a conversion and a new use phase.

In the context of public building law , development is limited to areas that have been designated as building land .

The earliest finds of human structures are dwellings made of animal bones and mammoth teeth from the beach near Nice, but also burial sites. They were created by the Neanderthals even before Homo sapiens appeared on the European continent.

The HOAI (fee schedule for architects and engineers) differentiates a. between buildings and civil engineering , as well as traffic systems and outdoor facilities .

A structure serves a specific purpose depending on the type of structure . One differentiates essentially:

The list of structures by function gives a detailed overview .