This article describes structures. For the assembly of components, see fastening technology .

The around five kilometers long fortification wall of the city of Ston is one of the longest preserved in Europe.

A fortification is a structure that is built to protect a place or part of the landscape against destruction by people, animals or the forces of nature. In the military field, they are also known as fortifications or weir systems .

Fixings in civil and structural engineering

A fortification includes components such as fences , ditches and walls as well as erosion protection measures such as reinforced earth . The naturally existing terrain is often included in the design of the fortification and is part of the same. Dykes should hold back river, lake and sea water (especially floods and storm surges ) and protect the cultivated land behind them from flooding. Bank reinforcements are intended to prevent undercutting and erosion of the embankment (see battle (hydraulic engineering) ). Slope reinforcements secure embankments in steep terrain against slipping ( falling rocks , debris flow ). Special slope fortifications are torrent barriers and avalanche barriers . In the past, the entirety of all facilities related to the art of fortification was summarized under the name of geniuses . Genius is the root word of the job title engineer . 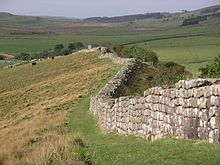 Fortifications should make defense easier and slow down the enemy. Because of the unchangeable position they could not serve in a war of aggression. Prehistoric settlements were often created where the terrain offered natural protection or surrounded by artificial ramparts . The field fortifications of military camps often consisted of palisades and dug trenches . Until the 19th century, towns and villages were fortified by ramparts , city ​​moats , city ​​walls and land defenses . Components of city walls and other defensive structures were towers , battlements , battlements , hurdles and gates . Castles , citadels , fortresses , forts , bastions , glacis and, more recently, bunkers were used as defensive and fortified structures . Examples of border fortifications (cordon) are the Roman Limes , Hadrian's Wall between England and Scotland, the Great Wall of China and the Danewerk in Schleswig, which was then part of the Danish Jutland . Larger military fortifications often required the foreshore to be redesigned to create coverings and also included accommodation and storage facilities. From the First World War, large-scale defensive structures such as the French Maginot Line were built. As large-scale defenses cannot offer effective resistance to modern artillery and air strikes, most of them were abandoned by the 20th century at the latest . A famous example are the fortification buildings in Königsberg .