The title of this article is ambiguous. Further meanings are listed under storm surge (disambiguation) .

A storm surge is a tidal current that is increased by a storm with onshore winds .

DIN 4049-3 (2005) defines a storm surge as a "rise in the water on the seashore and in the estuaries in the coastal area caused by strong winds when the water levels exceed a certain value."

The classification of North Sea storm surges for Emden, Bremen and Hamburg by the Federal Maritime and Hydrographic Agency (BSH), which is widely recognized in Germany, describes reaching 1.5 to 2.5 m above mean flood (MHW) as a "storm surge"; from 2.5 to 3.5 m above the MHW as a "severe storm surge", and at over 3.5 m as a "very severe storm surge". The mean flood is a term for the mean flood level derived from a sufficiently long series of observations.

Storm surges occur more frequently on the German coast in spring and autumn. The German Bight is the view of the Federal Maritime and Hydrographic Agency (BSH) one of the hardest hit by storm surges threatened areas worldwide. Due to the geography of the North Sea coast and the funnel effect of the Elbe estuary , this phenomenon occurs more frequently there than elsewhere.

Storm surges pose a threat to the affected coastal regions from flooding if they break through the man-made dikes . Storm surges give waves a considerable amount of energy. In the Middle Ages , storm surges changed the course of the coast in the North Sea area and created large bays such as the Jade Bay and the Dollard .

History of storm surges on the North Sea coast 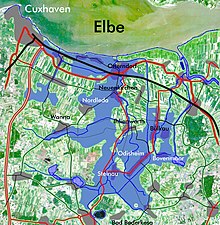 Affected area during a very severe storm surge of 4.5 m when a dike breached at Glameyer-Stack , Otterndorf

Storm surges and their effects have been known since Roman times . Reliable information is available - until recently - for the extent of the respective land losses. It is not known which storm surge was the most devastating in terms of deaths. The earlier data on the number of dead are very contradictory; It can be assumed that some figures were overstated with regard to the medieval settlement density on the North Sea.

On around 340 BC The great Cimbrian flood is dated. Around 120 to 115 BC In Jutland many people seem to have perished in a storm surge. However, there are great doubts that this could have been one of the factors behind the migration of the Cimbri and Teutons , as more weighty reasons are necessary for entire peoples to give up their habitat than a storm surge on the coast.

Around 1134 a storm surge occurred in Flanders . As a result, a sea arm ( Zwin ) was created, which extended as far as Bruges and later gave the city access to the sea via the canalized river Reie. During the Julian flood in 1164, around 20,000 people died in the Weser and Elbe regions and in East Frisia .

The most important storm surges of the Middle Ages are the First Marcellus Flood of 1219 and the Second Marcellus Flood or Grote Mandränke of 1362. In both floods, the course of the coast changed drastically: islands were destroyed, divided or created and large tracts of land on the mainland were lost overnight. There were tens of thousands of dead and dozens of villages lost. In the First Marcellus Flood, the Zuidersee , today's IJsselmeer , was created, killing around 36,000 people. In the case of the Groten Mandränke, the - perhaps somewhat exaggerated - estimates go up to 100,000 deaths. It is certain that 30 villages were destroyed in one night, as a result of the storm surge through the destroyed dikes, a total of 44 villages. Many other villages were cut off from the area for many years and became islands, including Asel near Wittmund.

Since the Middle Ages, a flood disaster has occurred in every century on Dutch territory, causing great damage and many victims:

See also : List of storm surges in the North Sea 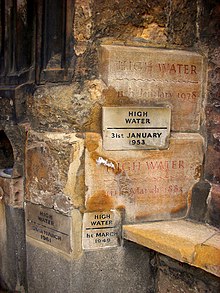 For the North Sea there have only been regular records of water levels since 1840 ; After the introduction of automatic level recorders, continuous records were made from 1880 onwards. From such sufficiently long observation series, average water levels are calculated and key data are derived which are used for the water level forecast, whereby meteorological data facilitate the forecast.

Mean water (MW) represents the mean water level over a longer period of time when measuring the water level, which is calculated as the arithmetic mean of equidistant, mostly hourly water levels over this period. This term is generally only used inland, where there is little or no influence from the tidal current. Mean flood (MHW) is the derived mean flood level or the mean flood height (MHWH). Tidal range (TH) is the difference in height of the water level as the tides change . Particularly high tides at full and new moon be Spring floods or colloquially (SPHW) Riptide called; they can develop into a storm surge due to tidal waves and wind ( drift current ).

If the water on the North Sea coast rises more than 1.5 m above the mean high water level (MHW), one speaks of a storm surge, from 2.5 m of a heavy and from 3.5 m of a very severe storm surge. It is created by the interplay of wind and tides , whereby both the wind strength and its duration play a role. If the moon and the sun are on one axis to the earth, the tidal forces add up to a spring tide at a new moon, which leads to particularly high water levels.

Storm surges are not uncommon on the North Sea coast. They have been handed down from 1000  AD , they changed the course of the coast and created large bays . They pose a threat to the relatively flat coastal regions from flooding, as far as they spill over the top of the dykes or even break the dykes. The inhabitants of the coastal areas have learned to deal with the complex of mounds , dikes , sluices , flood fight and windmills to protect (as scooping mills for drainage).

Nowadays storm surges are divided into light, medium and heavy floods according to the height of their water level. As long as there were no exact statistics of the water levels, they were rated according to the damage they caused. On average every two years a storm surge occurs on the Dutch North Sea coast, which is categorized as light and usually proceeds without major damage. Medium storm surges, which statistically only occur every 10 to 100 years, and heavy storm surges, which occur every 100 to 1000 years, are more dangerous, but also less frequent.

The following table contains the water levels measured during storm surges from 5 m above sea ​​level using the example of the Hamburg-St. Pauli and, in comparison, the water levels in Cuxhaven. 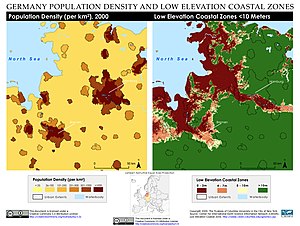 Population density and height above sea level in Hamburg and Bremen

In the course of global warming due to an increased greenhouse effect , scientists expect an increase in the risk of storm surges due to three effects: increased probability of storms, increased storm intensities and a general rise in sea level .

The storm surge risk analysis was published in 2014 as part of the risk analyzes in civil protection carried out by the German Federal Office for Civil Protection and Disaster Assistance (BBK) .

The analyzed storm surge scenario assumes a two-day winter storm, which leads to a very severe storm surge and hits the entire German North Sea coast, the Netherlands and Denmark. The highest water levels occur in Hamburg, Bremerhaven and Husum. The water levels do not exceed the dyke heights, but waves overflow, which causes dike breaks and flooding of the hinterland, sometimes with considerable damage. The storm caused long-lasting power outages nationwide.

Storm surges also became the subject of literary works such as in the novella Der Schimmelreiter by Theodor Storm , who also describes the development of dyke construction on the North Sea in the 19th century in a very interesting way . The storm surge is often referred to as Blanker Hans in German literature as well as in song lyrics . 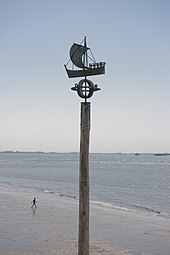