Adjustable weir with fish passage on the Werre in Lage

A weir , also weir , dam , in Switzerland , in Austria and southern Germany and Wuhr , Werche or Legi called, is in hydraulic engineering , a shut-off which closes the inflow or outflow of a water body. This makes it part of a dam . Weirs can be overflown or flowed through at times, or both at the same time. They are often, but not necessarily, used together with other systems such as B. watermills , hydropower plants , locks and dams built and operated.

The area in the actual or potential water flow direction below the weir is referred to as the underwater , the area above as the upper water . The water falling behind the weir falls into a stilling basin . The stilling basin can be closed by a threshold, which serves to stabilize the jump . River bridges are sometimes built over large permanent weirs . The trap is a smaller design of the weir .

The first man-made weirs existed around 5,000 years ago when people began to settle in Mesopotamia , on the Indus and on the Nile ; Beavers had been building stream or river barriers of this type in the temperate zones for a long time. Early weirs were built as easily relocatable clay dams (later also with wooden boards) in irrigation channels; the later fixed weirs were mostly used for the regulated supply of water for the operation of mills on rivers or streams or the regulation of a canal for other purposes such as water supply, irrigation (weir with diversion of a weir ditch). Weirs could make waters with shallow depths navigable, but on the other hand they represented considerable obstacles, especially for large shipping. 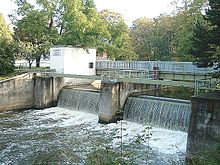 The weirs on the Nidda are used to regulate the water level. Seen here in Frankfurt-Rödelheim near Brentanopark

Basically, weirs increase the level of the headwater by a few centimeters to a few meters and can therefore serve different purposes (often several purposes at the same time):

The stagnation target is the prescribed water level in the upstream water, which is aimed for in accordance with the purpose of the weir for normal operation and which must not be exceeded with regard to the water users located on the upper reaches of the water. However, short-term exceedances cannot always be avoided in exceptional situations (e.g. during floods). The highest storage target represents the maximum water level at the design flood discharge. The water level is determined with a gauge . 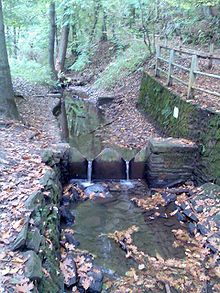 Weir system Groot Spui (around 1510) in Lier (Belgium) , was used to channel the water of the Nete more through the city or past it as required

Depending on the design, a distinction is made between different weirs:

The shape of the weir crown can be broad, rounded or sharp-edged. The shape influences both the discharge capacity at a given headwater level and possible underwater influences. On the weir crest there is generally a flow change from flowing to shooting. This flow change is accompanied by an acceleration of the outflow on the weir ridge. Under certain circumstances the relatively high underwater level can cause a backwater on the weir crest in the case of larger outflows and / or low weir heights. The ideally complete attack (undisturbed by the underwater) then turns into an imperfect attack, with an increase in the water level in the upper water ( retention ).

Weir with weir without closure

In the case of movable weirs, the closures can be partially or completely removed if necessary.

Larger weir systems are usually equipped with several weir fields with weir locks (control organs) that can be operated separately from one another. For safety reasons, weirs should have one more field than necessary ( n-1 rule ) so that one can fail safely as a result of revision or blockage in the event of floods.

Many weirs contain - at least in part, in individual fields - movable elements ( contactors ) with which discharge regulation is possible.

Weirs are artificial structures in natural waters. They block the water, often making it impossible for fish and other aquatic life to migrate upstream. This problem can be minimized by setting up a fish ladder . If a fixed weir threshold is possible, a base ramp is often used today instead of a weir, which most aquatic creatures can overcome better.

Weirs build up the water and cause a significant reduction in the flow velocity above, as the area through which the flow passes increases considerably with the same flow rate . The lower flow velocity leads to increased sedimentation in the upstream water and the bottom of the river bed can rise. The debris is missing below the weir . Since rivers then often absorb bed substrate with their excess energy, the bed deepening below the weir systems can deepen the entire body of water and possibly also the surrounding groundwater.

In a heavily polluted body of water, the low flow velocity can lead to a lack of oxygen on the upstream side and then to the death of fish . The temperature behavior of the water body can also be influenced by the damming above. As a rule, the flora and fauna in the storage space above the weir are different from those in the underwater due to the different flow speeds and temperatures .

In front of weir systems, there is a risk of death for people and also small boats that have got into this area due to the strong suction effect. Also below the weir, dangers emanate from the water roll that forms, as people may no longer be able to free themselves from it.