The Nidda is a river in Hesse . It rises in the Vogelsberg and, after a length of around 90 kilometers, flows into the Main at the Wörthspitze on the boundary between the Frankfurt districts of Höchst and Nied with an average flow of around 13 m³ / s .

The name Nidda is one of the oldest water names in Europe. The Roman city of Nida , built on the Nidda in the 1st century, indicates that the Romans already found the river name. The oldest medieval mention can be found in a document of the Lorsch Codex from the year 782. Since the name of the water body Nida is common throughout Europe, for example in Poland, in the Baltic States, in Scandinavia, on the British Isles and in Western Europe, linguists list the name the Indo-European original language back.

The Nidda rises from a high moor north of the Taufstein and southeast of the Sieben Ahorn at an altitude of around 720 m above sea level. NN. The source area is near the Niddaquelle hiking car park on the Hoher Vogelsberg ring road (L3291). Up to the tributary of the Graswiesenbach, it is also known as Hundsbornbach .

The point of the watercourse designated as the Nidda spring was originally actually a spring in the true sense of the word. Today, this point marks an arbitrary point on the still young brook with steady flow: at most times of the year, the water can be followed a few hundred meters further uphill through the high moor. 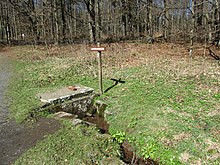 Above the actual source, near a crossroads, there is an enclosed outlet from a small well. Parts of this brook flow from the brook bed early - not untypical for a raised bog - and flow to other brooks ( pseudobifurcation ). When, after centuries of dispute, the Rhine-Weser watershed was declared the final border between the possessions of the Hessian landgraves and the Riedesel family , barons of Lauterbach, the landgraves had farmers from Schotten and Breungeshain dig a new creek bed to carry the water Well, henceforth called Landgrafenborn , led into the Nidda spring 600 m away. It then flowed towards the Rhine and moved the watershed - and thus the border of the game-rich hunting area - behind the Landgrafenborn. If this ditch were not maintained by the nature park, it would silt up and the Landgrafenborn would flow back into the Weser via the nearby Ellersbach.

The upper reaches of the Nidda are characterized by wooded mountain heights and floodplains with fields, meadows and pastures. There are also nature reserves near the river (mostly wetlands in lowlands ). After the city of Schotten , the Nidda reaches the Niddastausee with the Niddatalsperre as a barrier , operated by the NIDDA water association. The current of the Nidda is quite strong until about the Nidda subsurface. This decreases noticeably shortly before reaching the city of Nidda. In the Wetterau, the Nidda flows through the communities of Ranstadt , Florstadt and Niddatal , where it is fed by the weather . Downstream follow Karben and Bad Vilbel , where the only slightly smaller Nidder empties. The Erlenbach is another tributary south of Bad Vilbel-Massenheim .

At Harheim the Nidda reaches the Frankfurt city area. After 18.6 kilometers in the Frankfurt urban area, it flows into the Main in Frankfurt-Höchst at the Wörthspitze . The total length of the river is 89.7 kilometers.

The tributaries on the left are shown in dark, the ones on the right in light blue.

The length of the tributaries is greater than 10 km

The catchment area greater than 50 km²

The tributaries of the Nidda include (viewed downstream):

→ Main article : List of rivers in the Nidda river system

The lower course of the Nidda before regulation, flood cadastre from 1870

The first interventions in the course of the river took place as early as the early 18th century. In the lower reaches of Nied, for example, in 1709 a river bend above the Nieder Brücke to Höchst was cut off with a puncture and left to silt up. It can be recognized on the flood cadastre from 1870 under the field names Kirchenweiden and Krümm .

From 1926 to 1931 and into the 1960s, the course of the Nidda was regulated to reduce the risk of flooding. The previously numerous meanders resulted in oxbow lakes , while the river bed was straightened and lowered. This shortened the river to almost half of its actual length. Since 1993 the Nidda has been renatured in several areas. The water association NIDDA, based in Friedberg, is responsible for flood protection , maintenance and renaturation measures on the Nidda . The water association looks after the Nidda from Schotten-Breungeshain to the Eschersheimer weir in Frankfurt am Main.

During the regulation of the Nidda in Frankfurt, near the mouth of the Westerbach in the Rödelheim district , a Roman pile embankment was found, which led a Roman road from Nida dry across the constantly damp floodplain delta to the Main Bridge near Frankfurt-Schwanheim . Since the Roman conquests of Germania (approx. 82 AD), the Antsanvia (Antiana Via) ran through the Niedwald to the Roman settlement (Vicus) in Frankfurt-Nied, in which important military brickworks for the Upper Germanic-Raetian Limes and for the Roman army was in Upper Germany. The bricks were transported by barge along the Nidda to the small Roman port in the Roman city of Nida.

There are various floodplains on the upper reaches of the Nidda . For example, the area between Nieder-Florstadt and Florstadt-Staden is not always adequately protected against the risk of flooding by dikes . There are also larger retention areas in the area between Ranstadt-Dauernheim and Florstadt-Staden, and flooding can occur in Dauernheim itself .

On the lower reaches of the Nidda, in the bird protection wood of Hausener Auwald in the city of Frankfurt, yellow iris , yellow pond rose and splendid carnation grow . In the forests of the Nidda Forestry Office, endangered plant species such as globe flower , sword-leaved forest bird , large-flowered foxglove , creeping rose and pitch rose grow .

The following fish species are found in the upper reaches of the Nidda (near the city of Nidda):

At the mouth of Riedgraben / Nidda comes crayfish ago, the American crayfish was detected in Bad Vilbel and in the lower reaches near Frankfurt.

On the lower reaches of the Nidda beavers (in the area of ​​Florstadt and Frankfurt-Bonames ) and muskrats have been sighted, in the forests around Nidda the noctule bat . In the left Nidda-old arms Grill'scher bayou, Waldspitze and Kellerseck in Frankfurt's Nied and in the area of Nidda parks are coypu ( Myocastor coypus ) made his home. It is believed that these populations developed from animals that had escaped from the nutria fur farm on the Sossenheim Altarm Holler , which was operated after the Second World War .

The reed beds on the upper reaches of the Nidda (in the area of ​​the city of Nidda) are representatives of the bird species bluethroat , water rail , marsh harrier , reed warbler and reed bunting , and in the Frankfurt Nidda meadows there are sand martins , moorhens , gray herons , lapwing , hawk , middle woodpecker , green woodpecker and Gray woodpecker before. Black stork , peregrine falcon , eagle owl and black woodpecker can be found in the forests around the city of Nidda. In the near-natural areas of the Nidda in general, kingfisher , dipper and gray wagtail can be found. The plover and the tufted duck can also be found again on the Nidda.

The sand lizard occurs in the immediate bank area of ​​the lower reaches near Frankfurt. The grass snake can be found in Frankfurt in the area of ​​the Niddatal.

The following amphibians are in Nidda and its oxbow lakes, and other waters in the immediate vicinity before: newt , frog , pond frog , toad , green toad . Combed newts and tree frogs occur in the forests in the area of ​​the Nidda Forestry Office .

In the near-natural sections on the upper reaches of the Nidda, among other things, the insect species Banded demoiselle and blue-winged demoiselle , spring damsel and wedge damsel (family of the river damsel ) occur. The blue-and-black ant blues occur in Frankfurt in the area of ​​the Niddaauen. The stag beetle occurs in the forest areas near Nidda.