The Wetterau is a landscape in Hesse in Germany . In terms of nature , it is counted as part of the Rhine-Main lowland and forms the main unit 234. The name is derived from the Wetter , a right tributary of the Nidda .

The Wetterau, view from the west

The extent of the Wetterau was understood much more extensively in the Middle Ages and early modern times than is the case in the present:

The designation Wetter (g) au or Wetereiba or Wettereiba recorded as a Gau in the Middle Ages a space that protruded above all to the east far beyond what is now called the space. The Niddagau bordered the Wettergau to the west , the Maingau to the south and the Kinziggau to the east . The Rheingau was further to the west.

Even in the early modern period, the extension of the Wetterau was defined much wider than it is today. Erasmus Alberus described it in 1552 as the area between Gelnhausen and Mainz-Kastel and between Gießen and Seligenstadt , thus allowing the Wetterau to extend south over the Main and to the west as far as the Rhine .

The area north of Frankfurt am Main , east of the Taunus and southwest of the Vogelsberg is considered to be the Wetterau today . The southern limit is roughly the Hohe Straße ( Berger ridge ). The Wetteraukreis ( district town Friedberg ) occupies the main part of this landscape . It is named after the river Wetter , but apart from its tributaries like the Usa , it is also traversed by its receiving water Nidda and other tributaries, especially the Horloff and the Nidder ; so the name is a bit misleading. The landscape ultimately comprises a large part of the catchment area of ​​the Nidda, which rises in the Vogelsberg and flows into the Main between Frankfurt-Nied and Frankfurt-Höchst. The eponymous Wetter flows into the Nidda at Assenheim .

The Wetterau is allocated as follows

The Northwestern Wetterau (234.2) comprises the area from the eastern edge Taunus in the west to including Wetteraue between upper Hörgern and east of Bad Nauheim as eastern border and closes the Aue of Usa between Obermörlen and Bad Nauheim. The most important place is Butzbach ; the northern boundary to the Giessen basin, which cannot be defined as a line, roughly follows the watershed between Main and Lahn or Wetter and Kleebach . To the east of Münzenberger back (234.1) joins extending from south Lich over Münzenberg south to Assenheim draws; to the east of this the Horloffsenke joins the Horloff from Villingen via Hungen to Reichelsheim .

The south of the Wetterau (234.3 / 4) is divided by Nidda and Nidder . The Friedberger Wetterau (234.20) in the west stretches from Friedberg in the north to Bad Vilbel in the south and also contains the estuary of the Wetter in its extreme north east and that of the USA in the Wetter. To the east, the Nidda-Aue (234.31) joins from immediately below Stadens to the mouth of the Niddermouth , in the southeast then the Heldenbergener Wetterau (234.32) at Heldenbergen , which extends from the Nidda-Aue to the Nidder from Altenstadt . To the south of the lower reaches of the Nidder and Nidda, the Berger Ridge (234.4) stretches from south of Windeckens to south of Bad Vilbels to the south-west to the Frankfurt city center.

The Wetterau belongs to a weak zone in the earth's crust that sank in the Tertiary Period . It belongs to the unit of the Upper Rhine Graben , which splits in a fan shape at its northern end. In the west this is the Mainz Basin and in the east the Hessian Basin , to which the Wetterau also belongs. The basement is formed by sediments from the Rotliegend , which, however, do not come to light and were only encountered during drilling. Sediments have been deposited on the western Taunus ridge since the Paleozoic . From the Cenozoic onwards , basalt pebbles from the eastern Vogelsberg were also included. With the onset of volcanism in the Vogelsberg, some basalt currents flowed through the Wetterau. In the Quaternary - during the last ice age - a loess soil was formed by deposits of fine silty dust. Its fertility has had the most lasting impact on the landscape, and the Wetterau is still used intensively for agriculture today. Until the Second World War , lignite was also occasionally mined (especially in the area around Roßdorf and Wölfersheim ), and iron ore in the Middle Ages. Some terrain names still indicate this today, for example. B. at the Ludwigshütte.

The Wetterau is one of the oldest cultural landscapes in Germany . Because of its soils, which were productive even under the simple conditions at that time, it was already densely settled in the early Neolithic ( band ceramic culture ). The subsequent cultures also left numerous traces. The graves from the Bronze Age stage Wölfersheim or the Celtic finds from Glauberg are outstanding finds . Many cultural and historical finds from this time as well as from other historical epochs are exhibited in the Wetterau Museum in Friedberg. 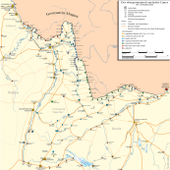 The Upper German-Raetian Limes with the Wetterau 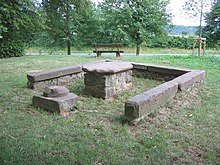 Stone table of the open court near Kaichen

Engraving of the Wetterau by Matthäus Merian

Patchwork quilt of the southern Wetterau with the Burggrafschaft Friedberg (1789)

For the Roman era in the Wetterau see main article: Civitas Taunensium

In Roman times the Wetterau was of great strategic importance for the advance into unoccupied Germania . However, at the time of the arrival of the Romans on the Rhine, the old settlement chamber no longer seems to be densely populated, the numerous oppida of the La Tène period were largely deserted. Instead, some Germanic groups can be found in the Wetterau in the first century . After the end of the Germanic campaigns of Augustus , fortifications and roads were built in the Wetterau from the Vespasian period (69 to 79 AD). A comprehensive settlement of the Wetterau with civil vici and villae rusticae began a little later around 100 AD. The Limes included the fertile Wetterau in a wide arc . The region belonged to the Civitas Taunensium with the main town Nida ( Frankfurt-Heddernheim ). The Wetterau remained part of the empire until the Limes falls in the 3rd century.

The first documentary mention took place in the year 767 in the Lorsch Codex , when a Reginbert in Aldenstat ( Altenstadt - Wetteraukreis ) bequeathed 15 acres of land to the Lorsch Monastery , with Aldenstat in the Wetderaiba district (Wetterau). (Codex Laureshamensis document 2942) The Wettergau was one of the districts that were administered by counts in the Franconian Empire on behalf of the king . In the 12th century, a larger area in the southern Wetterau can be found in the possession of the Counts of Nürings , which is known as the County of Malstatt .

The agricultural profitability of the Wetterau was widely known. Erasmus Alberus praises this agricultural profitability in his short description of the Wetterau 1552. The profitability of the Wetterau has been increased since the time of Frederick I through the targeted promotion of the urban centers, Frankfurt am Main , Wetzlar , Gelnhausen and Friedberg . The Wetterau cities with their representative buildings were important bases for royal travel and central places for the exercise of royal rights in the fields of economy and jurisdiction. The economic power was reflected in the royal and later ministerial coinage by Kuno I von Hagen-Münzenberg and the municipal market, from which a fixed sequence of the Wetterau fairs in Frankfurt and Friedberg arose since the 13th century. The Frankfurt trade fair has an unbroken tradition to this day.

The economic area thus created played a prominent role , as evidenced by the Imperial Tax Directory from 1241 , at the head of which were the cities and Jews of the Wetterau. That is why the kingship found support there in the crisis of 1241 to 1254.

With the end of the Hohenstaufen empire and with the extinction of the Munzenbergs in 1255, the different political forces of the Wetterau emerged more clearly, especially the large families of those von Breuberg (noble family) , Hanau , Eppstein , Falkenstein and Isenburg-Büdingen , the Friedberger Burgmannschaft , which is widely used in Ganerbengemeinschaften constituent Lower aristocratic associations, the free meals (especially Kaichen ) and the cities. There, bourgeois elites achieved greater autonomy in the late and post-Hohenstaufen period, despite their permanent ties to the monarchy, and in the 13th and 14th centuries secured this autonomy in regional and supra-regional city leagues. Due to a lack of hegemonic power, the kingship was able to maintain its formative influence in the Wetterau for a long time. These are still unclear in their skills commissioning Gerlach served Büdingen by Frederick II. Since 1219, based on the Roman-German King Rudolf I revived bailiwick as a summary and management of royal rights and possessions in the Wetterau. However, the provincial bailiffs , which can be verified until 1419 , increasingly used their position to enforce their own territorial interests.

The regional unity of the Wetterau was not the primary political action plan, but the result. The late medieval peace policy led from 1422 to initially mixed-class unions of knights , lords and counts of the Wetterau. These unions created regional identity, which was not dissolved even with increasing class demarcation.

Four stabilizing elements can be identified in the Wetterau from the transition from the Middle Ages to the modern era:

In the 16th century, with the Solms land law, a uniform common law prevailed in many of these territories . Nevertheless, the cooperation between the various small states was largely limited to individual aspects.

The earning power of the Wetterau was also her undoing in the Thirty Years' War . Pulling through the military repeatedly devastated villages and towns in the area, some of which suffered dramatic population losses.

The complexity of rulership in the Wetterau was maintained despite the loss of importance of many smaller territories until the mediatization at the end of the Old Empire , when large parts of the Wetterau fell to the Grand Duchy of Hesse-Darmstadt .

“The deeper we get into the colorful Roman Empire, the more flowery the statistics become, so that, from a political point of view, we really no longer know where we are and what the spot we are walking on belongs to. Darmstadt , Hanau , Solms , Burggrafschaft , Kurmainz and Pütter- knows-how-many governments are playing blind man's cow here in such a mess that one would believe that this part of Germany would once have been destroyed and hurriedly glued back together for good luck. I thank Heaven that this trip of mine is not statistical and that I do not have to worry about whether Peter or Paul have something to say here. What suffers most are our cars and our shoes; for the roads seem to know just as little as we do who should maintain them, and in this uncertainty they get worse and worse. "

- Jens Immanuel Baggesen : The labyrinth or journey through Germany to Switzerland 1789

A spacious meadow landscape runs through the valleys of the Wetterau. They are mostly united in the “Auenverbund Wetterau” and designated as a landscape protection area. The "Auenverbund Wetterau" has a total size of approx. 7369 ha and includes areas in the Wetterau district as well as smaller sub-areas in the district of Gießen and in the Main-Kinzig district. Nature reserves embedded in the network with European significance form the core zones of the Wetterau meadow landscape. They offer numerous species resting places, winter quarters, living space and home.

In the east, the Wetterau extends up over the foothills of the Vogelsberg. While floodplain valleys and agricultural areas dominate in the heartland, further to the east extensive mixed beech forests and pastures interspersed with hedges and orchards dominate. They accommodate local forms of life and communities. All in all, the Wetterau has diverse habitats that offer a home for numerous, including rare animal and plant species.