The Nidder is a left tributary of the Nidda in the state of Hesse , Germany. From the source to shortly before the mouth it runs about 10 km southeast parallel to the Nidda. 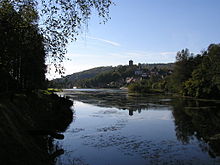 The compensation pond of the power plant Lißberg an der Nidder

Muzzle into the Nidda

In contrast to the artificially straightened Nidda, which is forced into a "corset", the Nidda still flows in its original river bed in most areas . This can be seen particularly in the annual autumn and winter floods, during which the Nidder rises in many sections over the banks and forms a large lake plateau between Altenstadt, Nidderau and Schöneck .

Due to the increasing environmental awareness of the population and the construction of sewage treatment plants , the fish stock in the Nidder is again very species-rich. Most of the course of the Nidder has water quality level II.

In the Middle Ages the river had an economic importance due to mills on its course, e.g. B. in oaks, Heldenbergen, Niederdorfelden or Windecken . The Philippi mill and the Thylmann mill, in which flour is extracted , are still in operation in Schöneck , albeit without hydropower . In Niederdorfelden, the historic oil mill from the 18th century has been restored and largely returned to its old condition. In Lißberg and Eckartsborn there are a total of three further mills in operation, which, however, have been equipped with turbines to generate electricity. One of them is the Neumühle in Lißberg , built in 1722 .

In addition, the Nidder power plant is located near Ortenberg-Lißberg . In Hirzenhain and on the Hillersbach, the water is dammed and the natural gradient is used to generate electricity. The compensation pond behind the power plant houses a bird island. A mill ditch is also diverted from the pond. One of the mills also generates electricity for its own use.

There are also traffic flows in the valley of the Nidder: On the one hand, the Niddertalbahn , which runs from Frankfurt am Main to Glauburg- Stockheim, uses the space for its tracks, on the other hand, the B 521 and B 275 follow their river bed over many kilometers.

The Niddertal is also popular with hikers , inline skaters and cyclists : the volcano cycle path largely follows the route of the former Vogelsbergbahn from Glauburg-Stockheim to Lauterbach .