The Wetteraukreis is a district that was created in 1972 in the Darmstadt administrative district in Hesse . The district town is Friedberg (Hessen) .

The district is named after the Wetterau landscape north of Frankfurt am Main . It is one of the most productive arable landscapes in Hesse and is named after the Wetter river . In the west, the foothills of the Taunus , eastern Hintertaunus , protrude into the district area. There are numerous mineral and thermal springs here ( Bad Nauheim , Bad Vilbel , Rosbach vor der Höhe ). In the east of the district, the Ronneburg hill country leads to the foothills of the Vogelsberg and the Spessart .

The Wetteraukreis borders in a clockwise direction in the north, beginning with the districts of Gießen , Vogelsbergkreis , Main-Kinzig-Kreis , the independent city of Frankfurt am Main and the Hochtaunuskreis and the Lahn-Dill-Kreis .

In the course of history, the district was split up into numerous dominions. The most important of these were the Landgraves of Hesse (later both the Hessian parts of Hesse-Darmstadt and Hesse-Kassel ), the Counts of Solms and Ysenburg , Kurmainz , the Burgraviate Friedberg and the Free Imperial City of Friedberg. Since the 19th century at the latest, today's district area has belonged to the Grand Duchy of Hesse , which formed the two districts of Friedberg and Büdingen within the province of Upper Hesse .

In the course of the regional reform in Hesse , a new district called Wetteraukreis was formed on August 1, 1972 , the district town of which was the city of Friedberg (Hesse). The new district was composed of

Seat of the district administration in Friedberg

District administrators of the Wetterau district

The last district election took place on March 4, 2018. In the first ballot, Jan Weckler (CDU) received 44.3% of the vote, the SPD candidate Stephanie Becker-Bösch received 33.3% of the vote. Thomas Zebunke (Greens) and Daniel Libertus (FDP) received 14.8% and 7.5% of the vote, respectively. The turnout was 31.7%. Since none of the candidates achieved an absolute majority in the first ballot, a run-off election between Jan Weckler and Stephanie Becker-Bösch took place on March 18, 2018, in which Jan Weckler was elected district administrator with 57% of the votes. The turnout was 23.1%.

See also : List of coats of arms in the Wetterau district

In the future atlas 2016 , the Wetteraukreis ranked 151st out of 402 districts, municipal associations and independent cities in Germany, making it one of the regions with a “balanced risk-opportunity mix”. In the 2019 edition, it was ranked 94th out of 401.

The fertile plain of the Wetterau between Taunus and Vogelsberg has always been an important thoroughfare from north to south. The Main-Weser-Bahn was the first to take this route between Kassel and Frankfurt. It was opened in 1850 from Frankfurt via Friedberg to Butzbach and in 1851 on to Lang-Göns. At that time, the district was part of Hessen-Darmstadt with the exception of Bad Nauheim in Hesse, which was only added in 1866.

On the edge of the Vogelsberg, another north-south line from Gießen via Nidda-Büdingen to Gelnhausen was built in 1870 by the initially private Upper Hessian Railway Company , which was then incorporated into the Hessian State Railway in 1876 .

To bypass the Frankfurt area, the Prussian State Railroad built a direct connection from Hanau to Friedberg , which was completed in 1881 with the section from Heldenbergen-Windecken.

The Hessian State Railway began to develop the Vogelsberg in 1888 with two branch lines from Nidda to Schotten and from Stockheim to Gedern , the latter of which was extended in 1906 to Grebenhain-Crainfeld and thus developed into a cross connection to Lauterbach.

The Friedberg station , which is now served by Intercity and ICE trains, developed into the most important railway junction . The three existing rail routes from Friedberg to Frankfurt, Gießen and Hanau were added: in 1897 the branch lines to Hungen and Nidda, which use the same route to Beienheim, and in 1901 the main line to Friedrichsdorf built as part of the Nauheim – Homburg – Wiesbaden railway.

In addition to Nidda, Stockheim is also a hub; the Niddertal Railway to Heldenbergen-Windecken has started here since 1905 and continues to Bad Vilbel on the Main-Weser Railway in 1907 .

Finally, the private Butzbach-Licher Eisenbahn AG , a subsidiary of Lenz & Co GmbH , completed the rail network with the railways that originated from Butzbach:

Local public transport in the district is operated by Verkehrsgesellschaft Oberhessen (VGO) as part of the Rhein-Main-Verkehrsverbund (RMV).

The most important local newspaper is the Wetterauer Zeitung (Friedberg / Bad Nauheim), in the Bad Vilbel area the Frankfurter Neue Presse , in the eastern district the Kreis-Anzeiger (Nidda), in the northwest the Butzbacher Zeitung . The local editions of the Frankfurter Rundschau are also widely read in the Wetterau district. 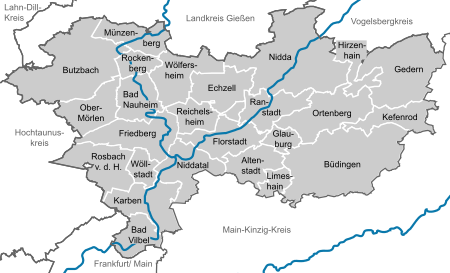 On August 1, 1972, the district was assigned the FB distinguishing mark , which had been valid since July 1, 1956 for the Friedberg district in Hesse . It is still issued today.

Until the 1990s, vehicles from the old district of Büdingen received license plates with the letter pairs DA to DZ and LA to LZ and the numbers from 100 to 999.

Since January 2, 2013, the distinctive sign BÜD (Büdingen) has also been available.

Cultural monuments in the Wetterau district