Above: a sample ballot from the city of Frankfurt am Main with numerous lists (columns) and their candidates. Below: the somewhat clearer note for the local council election.

Local councils are elected every five years in Hessen. This includes the election of the district councils , city councils and municipal councils as well as the local advisory councils . The members of the association chamber of the planning association for the Frankfurt / Rhein-Main conurbation and the composition of the regional assemblies of the three Hessian administrative districts - Darmstadt , Giessen , Kassel - are determined indirectly .

Coinciding with the local elections were mayoral elections take place, for example in the cities of Hattersheim and Karben and in the community Frielendorf .

In the 2016 Hessian municipal elections, all citizens of the European Union were eligible to vote who turned 18 on election day and had lived in the municipality for at least three months. For the local council elections, a voter had to have lived in the local district for at least three months . In addition, the voter was not allowed to have been excluded from the right to vote or de-registered ex officio on the basis of civil or criminal court decisions .

All eligible voters who had reached the age of 18 on election day and had lived in the municipality or city for at least six months were eligible. Likewise, they must not have lost their eligibility for election or their ability to hold public office through a judge's verdict.

In the local elections, the citizens of Hesse are called upon to redefine the composition of the local bodies. These include district assemblies , city ​​council assemblies or municipal councils and local councils .

The elections take place according to the principles of proportional representation combined with voting. If only one nomination is allowed, the majority vote is used. This was the case in Sensbachtal in the Odenwald district and in Rasdorf in the Fulda district .

In the elections you have as many votes as the respective body has seats. Voters have the option to cumulate their votes (up to three votes per applicant) and to variegate them , that is, to vote for candidates from different lists.

The mayoral elections are based on majority voting principles.

In the elections there were losses for the large parties CDU and SPD, which are now almost on par. The Greens suffered great losses and gave back most of their 2011 profits. The AfD achieved a double-digit result, and the FDP was also able to make up some of its 2011 losses. The national political issue of the refugee crisis in Germany and the performance of the AfD dominated the supraregional and regional reporting of the Hessian local elections, which were mostly interpreted as protest elections . The media and politicians found the voter turnout of 48% problematic for democracy. Thorsten Schäfer-Gümbel , chairman of the SPD Hessen, criticized in this context, even before the start of the election, the "overwhelming citizens" voting mode.

In the 21 rural districts and 5 urban districts, 224 nominations were allowed and in the 421 municipalities belonging to the district, 1804 nominations campaigned for votes.

For the results in selected Hessian cities see:

Composition of the municipal bodies

The composition of the district councils is as follows:

Sample ballot for the election of the city council of Spangenberg

The composition of the city council assemblies or municipal councils is as follows:

The smallest municipal councils are those in Hesseneck , Sensbachtal and Cornberg with 11 seats each and the one in Breitenbach am Herzberg with 13 seats. There are 15 seats in another 45 municipalities. including in the six towns of Rosenthal , Grebenau , Frankenau , Romrod , Ulrichstein and Schwarzenborn . The committee has 17 seats in five municipalities: in the municipalities of Gorxheimertal , Ronneburg and Schrecksbach and in the small towns of Bad Karlshafen and Hirschhorn (Neckar) . 12 municipalities each have 19 seats to allocate. There are nine communities and the three small towns Lorch , Neckarsteinach and Wanfried . The next largest category is 23 seats, which are to be filled in 75 municipalities, including 17 city councils. The citizens' councils in 19 municipalities, including the small towns of Neustadt (Hessen) , Diemelstadt , Beerfelden and Leun, have 25 seats . 18 municipal parliaments in Hesse have 27 seats to assign, including the cities of Reichelsheim (Wetterau) , Staufenberg , Bad König , Homberg (Ohm) and Bad Sooden-Allendorf . The city council in Gedern has 29 seats. Finally, a large group is the people's representatives with 31 seats, which can be found 114 times in Hesse, including in 43 cities. There are 33 seats in four city councils. And 37 seats can be found 93 times, 72 of which are cities. The cities of Rödermark and Bad Hersfeld have set the number at 39. There are 45 city councilors in each of 20 cities. In Bad Homburg vor der Höhe there are 49 places to be filled. In Hanau there are 53, while in Fulda , Gießen , Marburg and Wetzlar 59 city councilors are to be elected. In Darmstadt, Kassel and Offenbach the city council has 71 seats each, in Wiesbaden there are 81 and in Frankfurt 93. This city has the largest municipal parliament in Hesse. 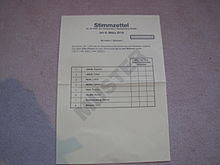 The number of members of a local advisory council is determined by the respective cities or municipalities in their main statutes. It must be between three and nine. If there are more than 8000 inhabitants in the district, there may be up to 19 members.