Bad König is a spa town in the Odenwaldkreis in southern Hesse . The city is a recognized spa .

"Quinticha" is the name with which Bad König is mentioned in a document from 820 to 822 . In the Middle Ages it was originally owned by the empire and then belonged to the imperial monastery of Fulda . Bad König was fortified in the early Middle Ages and was the focus of a central court and central office. In 1477 "Künnig as Chur Maintzisch Lehn" was given to the Konrad von Erbach tavern. By no later than the 16th century who built Counts of Erbach , the bathroom lock king in today's town center. According to the division of Erbach in 1747, the office of König came into the possession of the counts of the Erbach- Schönberg line . As part of the county of Erbach, the place belonged to the Franconian Empire .

In 1900, the engagement of Queen Wilhelmina of the Netherlands to Duke Heinrich zu Mecklenburg took place in Bad König . There were family ties to the Grafenhaus: Wilhelmina's mother Emma zu Waldeck and Pyrmont was a sister of Countess Elisabeth zu Erbach-Schönberg.

The beginnings as a spa go back to the 19th century and the discovery of two healing springs. In February 1948, the municipality of König was granted the right to use the place name "Bad-König" by the Hessian Minister of the Interior. It was only in 1948 that Bad-König was allowed to call itself a "state-approved bathroom". The official spelling was changed in June 1952 from "Bad-König" to "Bad König". On October 10, 1980, the Odenwald spa was granted city rights. The spa center is in the process of modernization thanks to new buildings after 2000 (Odenwald thermal baths and new foyer). 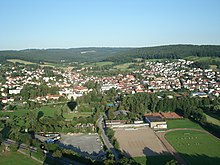 There was a Jewish community in (Bad) König until 1939. Its origins go back to the 18th century. The highest number of Jewish residents was reached around 1880 with 100 people. The community was orthodox . The Jewish families owned cattle and horse traders, grain and flour traders as well as shops for manufactured goods, colonial goods, glass and porcelain. The J. Mannheimer company had a large agricultural machinery business. There was a kosher pension for Jewish spa guests . The future rabbi David Mannheimer (1863–1919) comes from König . He officiated in Oldenburg (Oldb) , in the Grand Duchy of Oldenburg, as a land rabbi from 1891 until his death in 1919. He is buried in the Jewish cemetery in Oldenburg . The synagogue , built in 1795/97, was badly damaged in the November pogrom in 1938 and demolished in 1939. In 1933, 72 Jewish people were still living in the city. Due to extremely brutal scenes in connection with the November pogrom, most of them left the place, especially since they had not been allowed to buy food since 1939. At least ten Jewish people from Bad König were murdered after the deportations .

On August 15, 1952, the municipality of Bad König in what was then the district of Erbach was approved by the Hessian Ministry of the Interior to carry a flag in the colors red-white-red with a coat of arms.

Bad König has been twinned with Argentat in the Nouvelle-Aquitaine region in southwest France since 1982 .

Jakob Maul GmbH, located in Zell since 1912, is a commercial enterprise .

Two springs were discovered at the end of the 19th century: a steel spring containing iron and manganese and a 32 ° C thermal spring (Odenwald spring), a sodium-calcium-magnesium-bicarbonate-sulfate-chloride-water. Both were initially used for drinking cures.

Bad König has been a state-approved spa since 1948. Today it is changing from a conventional health resort to a contemporary wellness and leisure center. It is also a rehabilitation therapy center and has several clinics

and a dense network of doctors and pharmacies.

In 1952 there were the first initiatives to redesign the marshy meadow ground of the Mümling into a spa park. With considerable technical effort, two artificial lakes (since 1991 with water fountains), surrounded by green areas and promenade paths, were created in the 1960s. The spa park is now an extended family amusement park with a restaurant and beer garden, mini golf course, open-air chess, bocce court, Kneipp water treading pool (1987) and tennis courts and, since spring 2012, a water playground. There are organized Nordic walking and spa park running activities. In July 2012, 10 large sandstone sculptures by various sculptors were placed in the park. One of the Nordic Walking routes partly coincides with a planetary path of approx. 3 km length, laid out in 1997 , on which the sun and the nine planets of our solar system are explained at ten stations; the stations are at a distance from one another that corresponds to the constellation in the solar system. The explanation boards for the sun and the inner planets are located one behind the other in the entrance area of ​​the spa park, the last station (Pluto) on the border with the Zell district. The astronomical didactic program in the spa park has included three sundials since 1987 , on which the true local time (WOZ), which was valid until 1893 , the CET and summer time are explained; the natural midday (highest point of the sun) in Bad König (9 ° east longitude) is 24 minutes later than midday on the 15th degree of longitude (Görlitz time), which is decisive for setting CET at 12:00; in summer - one hour later - the highest level of the sun in Bad König is at 1:24 p.m. (Görlitz 1:00 p.m.).

In the past, spa treatments for muscle and joint problems, metabolic and vegetative disorders included carbonic acid and oxygen baths, underwater massages, mud packs and bathtubs; the counterpart in leisure time was determined by traditional local lectures, theater performances, spa concerts and tea dances in the spa café of the former foyer. This foyer of the spa center was replaced by a new building in 2010/2011, in which events take place regularly. The fountain hall, in which the Bad Königer medicinal water can be tasted, is located in the same building.

In 2000 the Odenwald-Therme with the 32 ° C warm thermal water (indoor and outdoor pools, bubble loungers, flow channel, whirlpool) and sauna area was opened. Today's spa treatments in the thermal bath include aqua fit gymnastics and massages, thalasso therapies, peelings, physio-therm infrared treatments and 45-minute inhalation stays in a salt cave with a mixture of Himalayan and Black Sea salt for the treatment of allergies and Clear the upper respiratory tract. 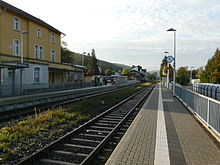 The city is connected to the transport network through the federal highway 45 ( Hanau - Eberbach ). The Odenwaldbahn (RMV lines 80, 81, 82, 85) connects Bad König and the Zell district with the Neckar Valley as well as Frankfurt and Darmstadt .

The following cycle paths lead through the city : 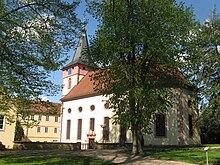 The sights are concentrated around the palace square with the Bad König palace , consisting of the old and new palace, rent office , Protestant church, baroque open staircase and pleasure garden. There is also a local museum for documentation of local handicrafts.

The baroque Protestant church (1750–1751) still has a three- story fortified church tower from 1479 from the previous building, which was integrated into the fortified cemetery (foundation stone with inscription in the basement). A Roman tombstone with the inscription "DML SEXTII VALE" was integrated into the masonry on the second floor; it is now in the gate of the renting department and was replaced by a copy on the spot. Above the sandstone portal on the west side (inscription dated 1751) is the coat of arms of the house of Erbach flanked by two putti. The interior is a hall with a flat ceiling and an organ from the 18th century.

The Villa Lien used as a health clinic is an important representative building of historicism.

Since 1999 a small museum with paintings and drawings as well as stuffed animals has been dedicated to the local painter Georg Vetter .

Approx. 1 km east of the city in the Kimbacher Tal is the Romanesque cemetery chapel with a late Gothic vestibule from 1514, a rectangular nave and a rectangular recessed choir (14th century). It is the oldest building in Bad König. Its structural core goes back at least to the 11th century, but it can also be older. However, the thesis that the predecessor was of Carolingian origin has not yet been confirmed. It only became a cemetery chapel when the congregation's burial place was relocated to the chapel during the reconstruction of the parish church in Bad König in connection with the structural redesign of the castle area. The year 1771 above the cemetery chapel heralds this last change of destination. During restoration work in spring 2005, wall paintings from the 14th century (figures of saints and passion scenes) were uncovered.