Signs for a cycle path in South Tyrol (Italy)

Start of the Danube Cycle Path in Passau

Although a large part of the tourist cycle routes have the word "cycle path" in their name, they should not be confused with "cycle paths" in the sense of the road traffic regulations, cycle facilities .

The designation of the tourist cycle routes differs regionally and nationally. In southern Germany, Austria and South Tyrol in particular, in addition to "cycle path", "cycle path" (analogous to the " long-distance path" of mountaineering and the " riding path") or "cycle route" are common, in Switzerland mainly "cycle route". The General German Bicycle Club (ADFC) recommends the use of the term “tourist cycle route” instead of “cycle path” for specialist discussions and literature, and the term “long distance cycle path” for cross-regional cycle routes instead of the commonly used term “long distance cycle path”.

The cycle superhighways are not designed for relaxation or gaining knowledge, but for better locomotion .

Tourist cycle routes are often based on cultural, natural or geographic themes. Cycle routes along rivers and canals are particularly popular, as they can combine an experience of nature with a low-gradient route (e.g. Oder-Neisse cycle path ). Other routes combine cultural monuments (such as the Umbindehausradweg), historical places (such as Krabat-Radweg ) or particularly interesting natural areas (such as the Wolfsradweg). Themed bike routes are particularly suitable for marketing by tourism associations and tourist offices. There are also brochures, websites and advertisements designed to lure cyclists into the tourist region. The goal is not always the shortest or the least incline, but the most interesting route, which is why tourist cycle routes are not always attractive for everyday cycle traffic. 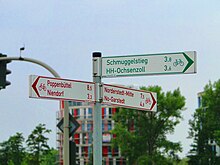 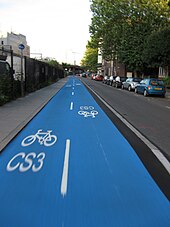 An important feature of tourist cycle routes is continuous signposting . In the past, simple signposts similar to hiking trail signs were used, today it is common to attach small signs with route pictograms to standardized main signposts. 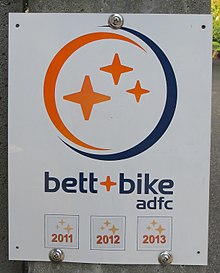 The ADFC offers since 2006 to check Radfernwege after a rigorous scale and with a star number than premium route certify . The assessment includes signposting, width and drivability, gastronomic offers and rest areas, bed + bike overnight accommodations, traffic loads and safety considerations. After three years at the latest, it is necessary to drive on it again for recertification so that the long-distance cycle path can continue to be marketed as a quality cycle route. Since the criteria are very strict, 5 stars are rarely given. Good bike routes can already be found on routes with 3 and 4 stars.

Paths of the countries and regions 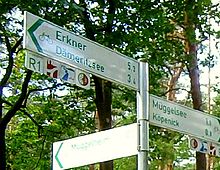 Marking of the R1 cycle path in Berlin-Müggelheim at the intersection with Neu-Helgoländer Weg.

Even within these criteria, the quality of the long-distance cycle paths can be very different, due to different road surfaces, local inclines and occasional stretches on or on roads with high vehicle loads. A database or map material with references to such shortcomings as so-called “unavoidable supplementary gaps” has not yet been established, but corresponding maps are available for some regions.

With this in mind, the ADFC has proposed a cycling network in Germany that should consist of 12 premium routes . There is also a network of routes primarily connecting cities. The state of North Rhine-Westphalia has been showing cycle paths on disused railway lines since 2013 under the title Alleen-Radwegeprogramm ; currently 364 km.

In Austria , the cycle paths are developed by the provincial governments in cooperation with the municipalities in whose area of ​​competence they fall structurally, the national tourism organization Österreich Werbung (ÖW) and the provincial tourism organizations. These cycle paths are accessible through the geographic information systems of the federal states (on special maps of the map servers of the federal states, also summarized under geoland.at ), accessible down to the cadastral level, and published as map material.

The international connection is made in cooperation with the EuroVelo cycling organization and as part of EU projects ( INTERREG ). In addition to the classic long-distance routes, the network of mountain bike tracks in the alpine terrain is naturally well developed in Austria . Here, the federal states work in particular with the Austrian Alpine Association (ÖAV) and the other Alpine associations that look after mountain paths and huts. The cooperation with ÖBB and ÖBB-Postbus , which concerns the simple transport and rental of bikes for long-distance tours, is also being promoted.

In Austria, the official maps and country tourism information show.

Cyclists on the Swiss Rhine Route

Bike signpost in the Tägerwiler forest

In Denmark there are eleven national cycle routes in addition to many regional routes (No. 11 is not assigned).

In France there are cycle paths and signs for this under the name Véloroutes ; In addition, various cross-border bike trails within the framework of European cooperation, e.g. B. the Itinéraire cyclable européen (European cycle route) Molsheim – Strasbourg – Kehl – ​​Offenburg.

The National Cycle Network (NCN) has 246 cycle routes (as of April 25, 2019). The first cycle route opened in 1984, the 15-mile Bristol and Bath Railway Path , which runs over a disused railway line (now a section of National Cycle Route 4). The total distance of all NCN cycle routes has grown to 16,575 kilometers (as of November 2018). However, 68% of the total distance of the cycle routes lead on roads also used by car traffic, including many main roads ( A roads and B roads ); only 32% run on cycle paths or on shared pedestrian and cycle paths ( shared use paths ).

Nationwide cycle routes in the Netherlands 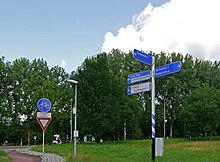 Amsterdam: A sign on the lamppost points to junction 52.

The Netherlands maintains a dense network of long- distance cycle paths, the so-called Landelijke Fietsroutes ( LF routes for short ). In addition, the whole country is criss-crossed by a system of bicycle junctions (Dutch: knooppunt ), which results in very individual route design options. The 24 Knooppuntnetwerke take care of the numbering of the junctions and the signposting of the paths.

In Norway there is a national cycle route network ( Nasjonal sykkelrute ) of ten routes, all of which (except for cycle routes No. 1 and 10) run in the southern part of the country.

As part of the Vías Verdes (green paths) project, disused railway lines have been converted into cycle paths.

In Canada , there is the Trans Canada Trail .

Bike routes in the USA

In the USA , for a long time, due to the lack of a national cycle path network, there were only associations such as the Adventure Cycling Association (ACA), which offered recommendations and guided tours for themed and long-distance routes. The state limited itself to only two routes that have existed since 1982 and largely followed the recommendations of the ACA. It was not until 2003 that an AASHTO working group began to fundamentally revise the national cycle path network and presented the first results in 2008. In 2009 the Federal Highway Administration took the planning and finally presented in 2011 an enormously expanded and numbered cycle path network through the entire United States. According to the current status, however, these are mostly corridor recommendations in which a bike route is to run in the future - actual route guidance or signage initially only exists in a few places.

In addition, more and more unused railway lines are being converted into cycle paths (Rails to Trails) and regional cycle route networks exist in the vicinity of some cities.

In the European Alpine region , “Transalp routes” are used by mountain bikers. As long-distance cycle paths, these routes are also European Alpine crossings that lead to high-alpine regions. They are designed for several days and occasionally require surefootedness. And pushing and carrying routes on steep scree sections may also be added. Much published, they are only passable in summer and are not specially signposted. These cycle routes use the alpine infrastructure that was created by alpine associations such as DAV , SAC , AVS and ÖAV . They are constantly preserved with high alpine shelters , mountain trails , path networks , modern hiking maps and clear path markings .

These European mountain bike routes include