The title of this article is ambiguous. Further meanings are listed under Brixen (disambiguation) .

Brixen ([ ˈbrɪksn̩ ]; Italian Bressanone , Ladin Persenon or Porsenù , Latin Brixina , until 1919 officially Brixen am Eisack ) is a town and municipality in the South Tyrolean Eisack Valley in Italy . Brixen is one of the oldest cities in the Tyrol region , the capital of the Eisack Valley and with 22,572 inhabitants (as of December 31, 2019) the third largest city in South Tyrol. It is the seat of the Eisacktal district community , a local business center and the location of several secondary schools and a hospital.

View from Milland over the Brixner valley basin in north direction

The municipality of Brixen is located about 40 kilometers northeast of Bolzano and 45 kilometers south of the Brenner Pass at the confluence of the Eisack and Rienz rivers in the Eisack Valley . The Brixner valley basin marks the beginning of the Eisack Valley, which is created here from the meeting of the Wipptal (from the northwest) and the Pustertal (from the northeast). It is surrounded by the Sarntal Alps in the west, the Zillertal Alps in the north and the Lüsner Mountains , a sub-group of the Dolomites , in the east. Smaller side valleys that open up here in the Eisack Valley are the Schalderer Valley coming from the west and the Lüsner and Aferer Valley coming from the east .

View from the west from Pfeffersberg to the city center

The municipality of Brixen occupies the central and southern parts of the valley basin. The northern neighboring communities of the basin are Vahrn and Natz-Schabs ; in the south, where the Eisack valley is increasingly narrowing, Brixen borders on Feldthurns and Villnöß .

To the west, the municipality rises over the slopes of the Pfeffersberg to the Hundskopf ( 2356  m ). On the east side it reaches up to the three peaks of the Plose (Telegraph, 2486  m ; Pfannspitze, 2547  m ; Gabler, 2576  m ). On the south side of the Plose, Brixen is bounded by the Sade , which means that the municipality encompasses the orographically right flank of the Afer Valley and, behind the Kofeljoch ( 1866  m ), even extends a bit into the Lüsner valley head to the Lasanke . In the Plose area, Brixen borders on Lüsen , St. Martin in Thurn and Villnöß.

Panorama of Brixen towards the south

The hamlet of St. Leonhard seen from the valley

The historic center of Brixen, was built at the confluence of the Rienza in the Eisack . The old town ( 560  m ) and the majority of today's urban settlement core with the districts Burgfrieden, Zinggen and Rosslauf are on the orographic right, western side of the Eisack. The district of Stufels , probably the oldest settlement center, occupies the mouth gusset between Eisack and Rienz; the quarter that extends over the slopes that rise behind Stufels is called Kranebitt . The immediate urban area also includes Milland , which is located slightly offset to the southeast on the orographic left, eastern side of the Eisack. In addition, the municipality also includes numerous rural villages, hamlets and scattered settlements , which form 20 further fractions .

The average rainfall is 700 mm, which is spread over about 85 days, with winter usually being the season with the lowest rainfall. These are usually expressed in the form of snow . The highest amount of precipitation is measured in summer , whereby the frequency of thunderstorms is greatest due to the clash of different air masses, favored by the proximity to the main Alpine ridge .

Various prehistoric settlements have been found in the Brixner valley basin, for example in Stufels . Brixen is probably already mentioned in a document on July 4th 828 AD under the name "Pressena". Brixen was mentioned for the first time in a document in 901 as Meierhof "Prihsna" in a deed of gift from Carolingian Ludwig IV to Bishop Zacharias von Säben . For centuries Bressanone was an influential seat of prince-bishops , who were German imperial princes from 1027 to 1803, far beyond the Tyrolean borders . 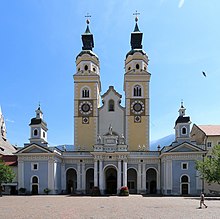 In the immediate vicinity of the city, conflicts arose between the prince-bishops and local nobles in the Middle Ages. In the 13th century, the Voitsbergers, ministerials at the court of the prince-bishop, tried to place parts of what is now the Burgfrieden district under their jurisdiction. So they built the Pfefferburg on the so-called burger hill to hold dishes there. Only Prince-Bishop Bruno von Kirchberg was able to prevail in feuds that had lasted for years against the Voitsbergers, the ancestral castle in Vahrn and the Pfefferburg were razed in 1270 and the separate judicial district Pfeffersberg / Salern was created.

In 1802 Brixen fell to Austria, 1805 to Bavaria ( Brixen Regional Court ), and again to Austria in 1814 . In the 19th century, the urban area expanded westwards towards Burgfrieden, which until then was still dominated by agriculture and where many citizens maintained goods for food supplies.

In the years 1912/13 the city built a barracks complex of 18 buildings. The barracks was named after Archduke Karl . The 8th Mountain Artillery Regiment of the 8th Army Corps was housed in the barracks. After the First World War , the Italian army took over the barracks. In 1920 Brixen became part of Italy when the Treaty of Saint-Germain came into force .

In the 1960s , the South Tyrolean children's village was built on the slope of the Oberraggengerhof am Pfeffersberg, according to the plans of the Brixen architect Othmar Barth .

The name probably goes back to a pre-Roman, perhaps Raetian name. It possibly originated from Rhaetian * Prikse-na (possibly German "area of ​​the Prikse"). The Räter had probably acquired this name from an even earlier wording and rätisiert. The Old High German form recorded in 901 is Prihsna , which then became Prixina (935–955) and Bricsina (952). In the High Middle Ages , the Brixen sound finally caught on.

The city's 1908 workplaces (including the public sector and NPOs ) employed 10,453 people as of October 22, 2001. One company employed over 250 people, eleven others over 100 each. Bressanone is therefore the second largest business location in South Tyrol after Bolzano in terms of the number of workplaces. In terms of the number of employees, however, it was only the third largest location in South Tyrol in 2001, as 239 more people were employed in Bruneck on the reporting date. The Stadtwerke Brixen AG are for electricity supply , drinking water , waste water , district heating , methane gas , fiber optics , environmental services and the geographic information system in charge in the field Brixen and surroundings. The A. Weger publishing house was first mentioned in 1555 as the “Prince Bishop's Court Book Printing” and is still in possession of a wooden printing press from that time. In the industrial zone of Bressanone there are mainly companies producing building materials. The Durst AG company located there sells its photo technology products worldwide. The first wood scanner worldwide comes from the Microtec company , which is also based in Brixen. The print shop and the registered office of Athesia , however, have been based in Bolzano since 2004 . The Brixner Milchhof (Brimi) is located across the municipal border in the Vahrn industrial area . The Forum Brixen conference and congress center comprises six halls, two foyers, a kitchen and a bar on 2,000 m².

Brixen is the location of a hospital of the South Tyrolean medical company .

For road traffic , Brixen is primarily opened up by the SS 12 , which passes close to the city center. In addition, the A22 and the Brennerbahn cross the municipality. Access to the motorway is provided by the Brixen- Pustertal entry and exit , which is, however, located in the northern neighboring municipality of Vahrn , and the Brixen industrial zone exit . The Brennerbahn has an access point at Bressanone station .

Bressanone branch of the Free University of Bozen

In Brixen there are the following upper and vocational schools : the Upper School Center "Jakob Philipp Fallmerayer" , the Classical Gymnasium "Vinzentinum" , the Social Science School Josef Gasser , the Technical School of Economics, Graphic and Communication "Julius and Gilbert Durst," the vocational school for the Hospitality and food industry "Emma Hellenstainer" and the state vocational school for trade, craft and industry "Christian Josef Tschuggmall". The Philosophical-Theological University of Brixen , founded in 1607 as the Brixen seminary , is the oldest university institution in historical Tyrol . The University of Padua has a branch in Bressanone with a student residence. As the headquarters of the Free University of Bozen (FUB), Bressanone has been a university town since 2001.

In the historic old town are the Brixen Cathedral with the adjacent cathedral cloister , the Frauenkirche and the Johanneskapelle , the Hofburg (the former prince-bishops), the seminary , the two arbor lanes , the motherhouse of the Brixen Tertiary Sisters, the Poor Clare monastery , the Capuchin monastery , the parish church of St. Michael and the Protestant Church of St. Gotthard and St. Erhard .

In the Hofburg, the former seat of the bishop of the Bressanone diocese , the diocesan museum is housed with a nativity scene exhibition . The Brixen Pharmacy Museum is also located in Brixen .

The "three-headed man" or "wild man"

In Brixen's old town, at the intersection between Säbenertorgasse, the Kleiner Lauben and the Großer Lauben on the facade of the Schwarzer Adler inn, the “three-headed man” (also known as the “wild man”) is located; its three heads are turned towards the respective alleys. According to legend, he spits out coins with all three heads on Good Friday when it rings twelve o'clock.

The Music and Church Initiative organizes concerts and symposia on all aspects of art, music and church. In the Forum Brixen events take place all kinds, including projections of film clubs Bolzano ; the Stella cinema offers the latest mainstream films . The Anreiterkeller is used as a cellar theater , the Dekadenz group offers cabaret as well as other cabaret forms, and guest performances and concerts take place in the Anreiterkeller. Church concerts often take place in the cathedral or in the church of the seminary .

The Theater Education Center has existed since 1989.

The Trametsch descent in the Plose ski area, marked as a black slope, is the longest descent in South Tyrol. The Brixen sports club SSV Brixen is particularly successful in the handball , football , gymnastics , Yoseikan Budo, swimming and athletics sections . The FC Südtirol , South Tyrol's only professional football team, which has been playing since its promotion to the professional league in Bolzano , was founded in Brixen. In November 2002 the combined outdoor and indoor pool with restaurant, sauna and fitness area Acquarena was opened on the site of the old Bressanone outdoor pool. 2009 Brixen hosted the sixth U18 Athletics World Youth Championship the IAAF . In 2010 the Brixen Marathon took place for the first time, leading from Domplatz to the summit of the Plose. The international South Tyrolean mountain gymnastics festival, founded in 1961 as the Brixen mountain gymnastics festival, took place in Brixen until 2010 . The Caidom , a mass start downhill mountain bike race that leads from the summit to the cathedral square, has taken place every year since 2005 . In 2010, the final of the first Gibbon Slackline Contest was held in Brixen , which also ended the first overall World Cup in slackline. At the football championships of the secondary schools from September 20 to 25, 2010 in Riccione , the women's football team of the Brixen commercial college won the Italian title. The International Mountain Summit in Brixen is a meeting of mountaineers. 2012, 16 were unicycle - World Championships the Unicon held in Brixen 16th

→ Main article : List of personalities from the city of Bressanone

Brixen is covered by the transmitter Plose and transmitter Albeins with the radio and television programs of the RAS / RAI.

Wikisource: Brixen in the appendix of the Topographia Austriacarum (Matthäus Merian)  - sources and full texts

Municipalities of the district community Eisacktal

Cities of the Autonomous Province of Bolzano - South Tyrol