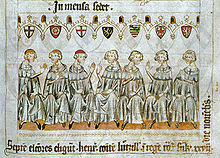 The seven electors elect Heinrich von Luxemburg as Roman-German king in 1312 . On the left in the picture, recognizable by their headgear, the three electors, who are also archbishops . (Cologne, Mainz, Trier)

A prince-bishop or prince-archbishop was a bishop or archbishop who, in personal union with his spiritual power, also exercised secular rule over a spiritual territory , which he presided over as sovereign . In the area of ​​the Holy Roman Empire of the German Nation , the function de facto disappeared with the dissolution of the empire in 1806. In some dioceses the name survived until after the First World War. The use of the titles prince-bishop and prince-archbishop as well as the use of the secular signs of dignity associated with them (such asPrincely hat and coat ) were created in 1951 by Pope Pius XII. also formally abolished.

Prince-Bishops in the Holy Roman Empire

A prince-bishop was a bishop with the rank of prince . His rank was that of an imperial prince of the Holy Roman Empire . This secular rulership function of bishops goes back to the policy of the early medieval German kings to rely on the bishops appointed by them to curb the influence of powerful princely families. Several of these bishops were granted royal rights ( regalia ). In the course of the development of territorial principalities, these bishops also expanded their domains into secular territories , which were referred to as bishoprics .

In 1521 there were 53 Catholic ecclesiastical principalities in the Holy Roman Empire of the German Nation, the Reformation and secularization reduced this number to 23 by 1648, which increased slightly to 26 in the 18th century.

In the 16th and early 17th centuries, in addition to these prince-bishops who remained Catholic, there were also a number of Protestant princes - above all the important prince-archbishopric of Magdeburg . Almost all of these evangelical spiritual states, which were usually ruled by princes of powerful neighboring dynasties as administrators , transformed the Peace of Westphalia of 1648 into secular principalities (in favor of larger secular states such as Brandenburg-Prussia ), which was last implemented in Magdeburg in 1680. The only remaining Protestant prince- bishopric was the Diocese of Lübeck and , as a borderline case, the diocese of Osnabrück, which alternated between Catholics and Lutherans . All other bishoprics that existed between 1648 and 1802/03 were exclusively Catholic. In addition, there were only three Protestant imperial abbeys .

Between the 16th and early 19th centuries, the positions of prince-bishop were almost exclusively occupied by representatives of certain groups of the old nobility - princely sons, imperial knights and old media nobility. In this respect, the German Reich Church was primarily an aristocratic church until 1803 in the leading positions. At the same time, however, it made limited forms of social mobility possible, as certain non-princely nobles and, up to the 17th century, also commoners, were able to gain personal advancement to the dignity of imperial princes through a bishopric.

The growing loss of legitimacy of clerical states in the age of rationalism and enlightenment , the influence of revolutionary France from 1792 , where church property had already been "nationalized" and sold, and the materially motivated annexationism of neighboring secular states in Germany led to the peace of Lunéville in 1801 within a decade the secularization of all spiritual states in Germany brought about. Almost all of the principal dioceses were occupied by their secular neighboring territories as early as 1802, which was also sanctioned by the Reichsdeputationshauptschluss 1803 under imperial law.

The last elector / archbishop of Mainz, Karl Theodor von Dalberg , was the only one who was able to rule a spiritual state for a few years as electoral chancellor of the empire or (from 1806) as the primate of the Rhine Confederation (focus: Regensburg and Aschaffenburg ), but also in 1810 was secularized and transformed into the Grand Duchy of Frankfurt , which Dalberg ruled until 1813.

In the territory of the Habsburgs, some bishops carried the title of prince-bishop or prince-archbishop even without secular rule until the end of the monarchy in 1918 (e.g. Vienna , Prague , Gurk , Lavant and Seckau ).

Around 1800, before its end, the Holy Roman Empire of the German Nation had the following principalities:

Prince-Bishops outside the Holy Roman Empire

Outside the Holy Roman Empire, there was no prince bishops when one of the higher-level exception of the Pope (who is also yes Bishop of Rome) ruled the Papal States in central Italy and disregards a few other exceptions.

The Bishop of Brescia received the title of Count of Brescia from Emperor Ludwig II in 844 . From 1077 to 1420, the Patriarch of Aquileja was Prince-Bishop of his own territory.

Prince-Bishops in the Baltic States

The bishops of the old Prussian dioceses of Warmia , Samland , Kulm and Pomesanien as well as the Livonian dioceses of Riga , Kurland , Dorpat and Ösel-Wiek ruled over their own territory and sometimes also appeared as imperial princes, although their domains were outside the imperial borders.

The political role of the Orthodox Bishop of Cetinje in the Montenegro region , which has been developing since the 16th century, is an exception . While the Ottoman Empire and its sultan also claimed rule over Montenegro after the conquest of Serbia around 1470/80, the mountain tribes there often successfully defended themselves against the actual implementation of this claim. The bishop (Vladika) of Cetinje was used and recognized by the tribal leaders as a kind of impartial president of this loose state. Danilo Petrović Njegoš (Petrovitsch Njegosch), who took over the office of Vladika in 1697 , succeeded in appointing a nephew as his successor, whereupon the office became hereditary in his family and consequently "dynasty" in the course of the 18th century. But only Prince-Bishop Petar I (1782–1830) was able to secure the secular and spiritual leadership position of the Petrović Njegoš family permanently, and only his nephew Peter II (Petar II Petrović Njegoš) (1831–1851) switched a rival powerful clan so far from the fact that the prince-bishop rose to become the undisputed political leader in Montenegro. In this respect it was logical that his nephew and successor Danilo II (1851-1860) gave up the episcopate in 1852 and proclaimed himself secular prince of Montenegro . This principality of Petrović Njegoš was upgraded to a kingdom in 1910 under Danilo's nephew and successor Nikolaus I (Nikola, sometimes also Nikita) (1860–1918) , but was joined to the newly founded " Kingdom of Serbs, Croats and Slovenes " in 1918 later Yugoslavia .

The Diocese of Durham was of strategic importance because of its proximity to Scotland. The Prince Bishops of Durham (Engl. Prince bishops ) were therefore awarded as the power of life and death in the Middle Ages by King special rights.

The bishops in the areas of the Holy Roman Empire, which fell to France in the 16th century, were prince-bishops, such as the three bishoprics and the archbishopric: Strasbourg and Besançon .

In 1674 the Archbishop of Paris (who had only become a metropolitan half a century earlier) was added, who due to his importance received the Duchy of Saint-Cloud with the dignity of a peer.

The diocese of Ohrid remained after the conquest of the Bulgarian Empire by the Byzantines as an autonomous archdiocese where the Archbishop had the secular power are. Under the rule of the Ottomans , large parts of the Orthodox Christians in Serbia were later subordinated to him until they dissolved the Archdiocese of Ohrid in agreement with the Patriarch of Constantinople in 1767.

The bishops of Urgell in Spain have been co-princes of Andorra from 1278 until today .

In Austria-Hungary, some bishops carried the title of Prince-Bishop, although in many, but not all cases, it was a continuation of old titles from the HRR times; the title was also awarded by the emperor (for example to Cracow in 1889). Although the title was not a secular territory, it was associated with certain state functions within the Habsburg monarchy, in particular the seat in the manor house of the Imperial Council , or, in the case of the Prince Archbishop of Gran-Esztergom , left the now cisleithan Imperial Council in 1867 Role of the first state dignitary in Hungary after the Apostolic King. In contrast to Prince-Bishop , Prince-Archbishop was , except in the latter case, a purely honorary title, since Archbishops already had all the rights of Prince-Bishops.