Eckher's coat of arms as Prince-Bishop 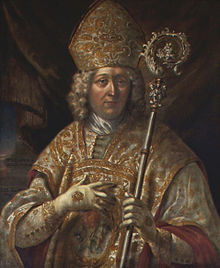 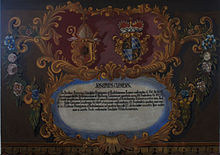 His parents were Johann Christoph Eckher von Kapfing and Liechteneck (1608–1685) and his wife Regina von Kürmreith. The family belonged to the long-established Bavarian landed gentry.

Johann Franz initially served as a page with Prince-Bishop Albrecht Sigismund of Bavaria , then attended the Jesuit high school in Munich until 1671 and then studied theology. In 1674 he was ordained a priest, and from 1679 to 1684 he was pastor of St. Lorenz in Oberföhring . In 1684 the aristocrat became dean of the Freising Cathedral , and on January 29, 1695 he was elected bishop. He was consecrated on July 1, 1696 by Johann Franz Khuen von Belasi , the Prince-Bishop of Brixen.

Johann Franz Eckher von Kapfing and Liechteneck worked as a zealous shepherd, making numerous trips to confirmations and ordinations. The promotion of the school system was very important to him, as was the charitable support of his diocesans in the distress of the War of the Spanish Succession . Eckher succeeded in founding a Philosophical-Theological University in Freising in 1697 .

The prince-bishop had the Asam brothers redesign the medieval cathedral in the baroque style and ordered the construction of the hospital (today's Eckherhaus ). The Neustift monastery church was built under court architect Giovanni Antonio Viscardi . The baroque tower of the parish church of St. Georg is a testament to his work . Johann Franz Eckher von Kapfing and Liechteneck laid the foundation stone for the new monastery and the new abbey church in Weltenburg on June 29, 1716 and consecrated the church on October 9, 1718.

In 1704, a few days after the disastrous battle on Schellenberg near Donauwörth , Prince-Bishop Johann Franz Eckher had the mystic Maria Anna Lindmayr summoned to Freising because he had heard of her visions. She predicted that Munich would be spared the devastation caused by the imperial troops if the congregation built a church in honor of the Holy Trinity . As a result, on July 17, 1704, the three estates ( clergy , nobility and citizens ) vowed the required construction of the church, today's Munich Trinity Church . After delays due to various circumstances, Prince-Bishop Johann Franz Eckher von Kapfing and Liechteneck finally laid the foundation stone for the building of the church on October 21, 1711 and consecrated it on May 29, 1718. Although the War of the Spanish Succession and the ensuing occupation brought difficulties and hardships for Munich , the city was neither besieged nor destroyed at the time.

The Freising Bishop always tried to preserve the independence of the bishopric . According to the historian Christian Probst, he was "a sworn enemy of the uprising " against the imperial occupation. On December 23, 1705, he ordered the pastors of his diocese “to their parishioners more often, both from the pulpit and in other ways, to obey their clergy and secular superiors and lordships, as well as the heavy responsibility of a general uprising and the inevitable punishment of God This admonition came too late for the Oberlanders who were leaving , but in the other dioceses, Salzburg , Eichstätt , Regensburg and Passau , the clergy were instructed to keep the people from rebellious acts of violence from the pulpit and in the confessional To bring thoughts. According to Christian Probst, however, it is questionable whether all pastors carried out this task.

In 1724, on his behalf, the Benedictine Father Karl Meichelbeck compiled the 'Historia Frisingensis', which today is rated as the first source-critical historical work in Germany. The prince-bishop was very interested in history and genealogy; he carried out intensive research in this area.

In his biography World and Life of Johann Franz Eckher von Kapfing and Liechteneck, Prince-Bishop of Freising , Benno Hubensteiner wrote in 1954: "When Bishop Eckher died of a stroke in 1727, he was venerated almost like a saint by the population." Freising Cathedral , where its epitaph has been preserved.

The website of the native parish of Train describes Bishop Johann Franz Eckher von Kapfing and Liechteneck as one of the “most important men of his time” and adopted the three diamonds of his coat of arms in the local coat of arms.