Heinrich of the Palatinate 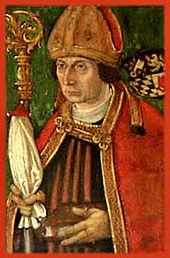 Heinrich von der Pfalz (born February 15, 1487 in Heidelberg , † January 3, 1552 in Ladenburg ) was Prince-Bishop of Worms , Utrecht and Freising as well as Prince-Provost of Ellwangen .

The older brother Ludwig V , who had taken over his electoral dignity after the death of his father in 1508 , appointed Heinrich in 1521 as Prince Provost of Ellwangen and in 1524 procured him the office of bishop in Worms, where he was led as Heinrich IV .

Emperor Charles V , to whom Heinrich owed his additional election as Bishop of Utrecht a year later, found in him a reliable supporter. During Heinrich's time in Utrecht there were several riots because in the wake of the Reformation the authority of his office was repeatedly called into question. In 1528, as Duke of Brabant and Count of Holland , he therefore transferred the secular administration of the Utrecht Monastery to the Emperor, which meant the end of Utrecht's political independence. A year later, Heinrich also gave up the office of bishop in Utrecht and left the city.

Then he devoted himself to the diocese of Worms. The renovation work on the summer palace of the Worms bishops in the Palatinate parish of Dirmstein is associated with Heinrich's name after it was damaged in the Peasants' War . An inscription is carved into a sandstone lintel that can be classified between 1525 (Peasants' War) and 1541 (assumption of the Freising bishopric, not mentioned here):

Translated into today's German, this means:

"Heinrich, by the grace of God chosen and confirmed coadjutor of Worms and Utrecht, provost and lord of Ellwangen, count palatine of the Rhine and duke in Bavaria"

In 1541 Heinrich also received the episcopal dignity of Freising after his older brothers Ruprecht and Philipp , who had held the office one after the other, died. Here he is called Heinrich III.

On August 14, 1543, the bishop in Ladenburg brokered an atonement treaty between Hans Sigmund von Plieningen and Caspar II. Lerch von Dirmstein ; In 1531 Hans Sigmund had killed a son of Caspar Lerch in a duel. In connection with the contract, the Weinsheim memorial cross was erected and the Dirmstein Catholic Hospital Foundation , which still exists today, was established.

The historian Karl Meichelbeck calls Bishop Heinrich a “pious and just gentleman who has taken care of the poor secular clergy” . He had never received episcopal ordination. Joseph Ferdinand Damberger notes about him: "... despite all the praised goodness, anyway not consecrated, was hardly a match for anyone in the terribly turbulent times."