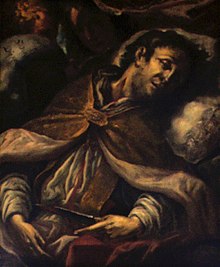 Konrad von Hebenstreit on a painting in the Fürstengang Freising

Konrad von Hebenstreit (* Hof Hebenstreit near Slovenske Konjice , today Slovenia , † 1412 in Bischoflack ) was as Konrad III. Bishop of Gurk and, as Konrad V, Prince-Bishop of Freising .

Youth and Bishop of Gurk

The knight family Hebenstreit had their headquarters at Hof Hebenstreit near Gonobitz in Lower Styria, today Slovenia. According to the records of the Dominican monastery in Friesach , Konrad's parents were Margareta and knight Andreas von Hebenstreit. He began his career in 1386 as a pastor of Bruck an der Mur . From 1387 to 1388 he studied at the University of Vienna . In 1402 he was appointed bishop of Gurk as a candidate for the Austrian duke and was able to prevail against the candidate for Salzburg archbishop Gregor Schenk von Osterwitz . At the same time he - like his predecessor in the episcopal office Johann IV. - was appointed chamber master of Duke Friedrich of Austria .

He received episcopal ordination from Archbishop Gregor in 1402 and confirmed the city charter of his residence city of Strasbourg in the same year. Bishop Hebenstreit proved to be an extremely good economist in his diocese.

After the death of his predecessor Berthold , the Freising Cathedral Chapter tried again to elect its own bishop. The choice fell on September 30, 1410 on Degenhard von Weichs. Pope John XXIII however, did not recognize the choice, as he urgently needed the servitia of the diocese. So on March 23, 1411 he called Konrad von Hebenstreit as Bishop of Freising. Degenhard peacefully renounced his claims and remained canon in Augsburg.

Prince-Bishop Konrad V, however, never came to Freising. After his appointment, he set out from Strasbourg in the spring of 1412 to travel to his episcopal city via the Carniolan possessions in Freising. He first went to Bischoflack, where he received an embassy from Freising in the castle. There the wealthy bishop was murdered by his servants that night. The chronicler Karl Meichelbeck writes: ... it so happened that Konrad's valet, who knew that he had five thousand ducats with him, stabbed him at night in bed and then gave him the blood-stained knife in his hand so that one could should believe that the bishop has gutted himself; yes, they are not horrified to scatter the same thing themselves after they have carried away the money ... The bishop, who was thought to be a suicide, was not buried in consecrated ground but in the garden of the episcopal palace. 18 years later the murderer confessed the crime in Rome and Bishop Nicodemus della Scala von Freising had the remains exhumed and buried in a solemn procession in 1433 in the parish church of St. Georg von Altenlack in what is now Slovenia.